A new campus pedestrian bridge spanning Boulder Creek is open for use, improving Americans with Disabilities Act (ADA) access and overall connectivity between Main Campus and areas north of the creek. 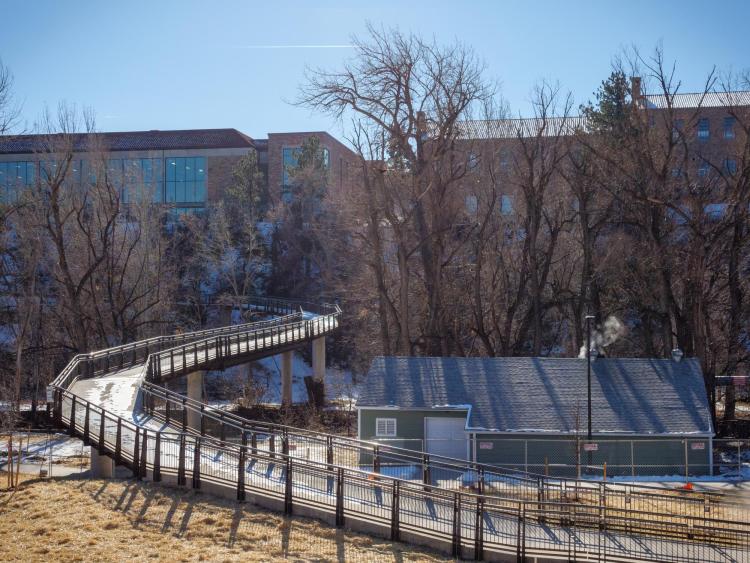 The new raised bridge and pathway begins at 19th Street and Grandview Avenue in the neighborhood north of Boulder Creek and ends at Stadium Drive between the Student Recreation Center and Dal Ward Athletic Center. It replaces a historic connection that was washed away by the 2013 flood and provides significant connectivity and ADA accessibility improvements for people living in the areas north of Boulder Creek (Athens Court, Faculty Court, etc.).

This project is part of an overall effort to increase pedestrian connectivity to campus, the first phase of which was completed in January 2019 with the opening of the new pedestrian bridge north of Folsom Field and a bridge connecting the Discovery Drive and Marine Street areas of East Campus. The new bridge at 19th Street and the bridge north of Folsom Field are the first ADA connections from downtown Boulder to campus.

The 19th Street Bridge project was approved by the CU Board of Regents, with 80 percent of the cost being covered by the Denver Regional Council of Governments using Federal Transportation Improvement Project funds.

Continued updates on this and other projects can be found on the campus Cone Zone webpage.