A roadmap for science on the moon Artist's depiction of the DAPPER satellite in orbit around the moon. (Credit: NRAO)

Scientists at CU Boulder have laid out a roadmap for a decade of scientific research at the moon.

Teams from the university will participate in four upcoming or proposed space missions that seek to use the moon as a unique laboratory for peering back to the dawn of the cosmos—collecting unprecedented data on an epoch in the life of the universe before the first stars formed.

The first of these efforts will deploy an instrument called Radio wave Observations at the Lunar Surface of the photoElectron Sheath (ROLSES). It’s slated to land on the moon in just over a year. Another involves a proposed satellite known as the Dark Ages Polarimetry Pathfinder (DAPPER). It could be in orbit around the Moon by the decade’s midway mark. 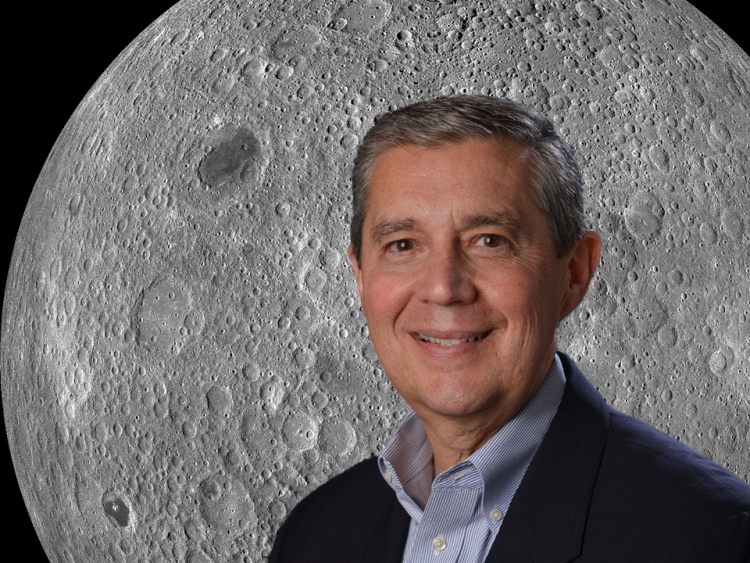 “It’s a completely unexplored part of the early universe, which we call the Dark Ages,” said Jack Burns, a professor in the Department of Astrophysical and Planetary Sciences at CU Boulder. “We have no data from this period and no prospect of getting any data using traditional telescopes like the Hubble Space Telescope.”

Burns described the four missions during a virtual talk this month at the annual meeting of Lunar Exploration Advisory Group (LEAG), a scientific advisory body for NASA.

NASA Administrator Jim Bridenstine, who also attended the meeting, shared in the excitement.

“One of the missions that has me really excited is DAPPER,” he said in a talk. “We’re going to be able to see the Dark Ages after the Big Bang and before Cosmic Dawn.”

For Burns, the next few years could wind up being the most exciting of his decades-long career.

The scientist, who is also vice president emeritus for Academic Affairs and Research for the CU System, explained that no visible light existed in the universe during the Dark Ages because of the lack of stars. That complete darkness, which lasted for roughly 180 million years, makes this time period impossible for astrophysicists to study today.

Or almost impossible: Burns and other researchers have predicted that scientists will be able to detect the faint radiation emitted by clouds of hydrogen gas that filled the universe during this period. It’s that same radiation, visible today in radio waves traveling through space, that Burns and his colleagues hope to see when they go to the moon.

ROLSES will get the party started in October 2021.That’s when the instrument will land on the moon aboard the Nova-C Lunar Lander built by the company Intuitive Machines. ROLSES will begin scanning the sky for radio waves shortly after.

It will be followed in 2024 by a second lander mission called the Lunar Surface Electromagnetics Experiment (LuSEE), which will collect similar data but from the moon’s farside—or the side of the moon that always faces away from Earth. This region of the lunar surface, Burns explained, is shielded from the interference produced by radio waves on Earth. 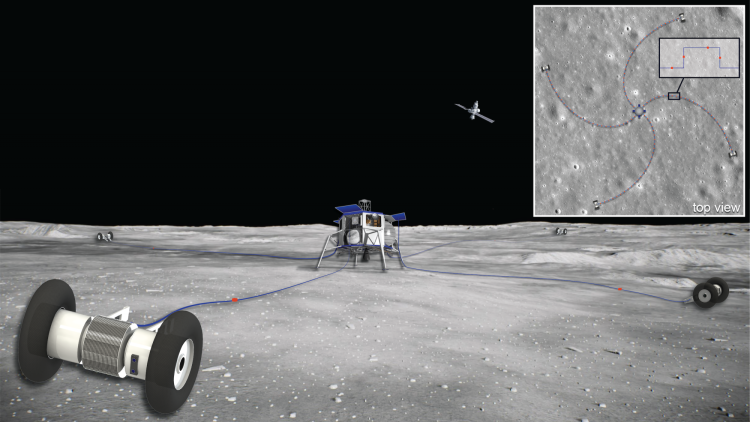 Artist's depiction of robots spooling out antennas on the moon's surface as part of the proposed FARSIDE mission. (Credit: Jet Propulsion Laboratory)

Both landers will set the stage for DAPPER. If this satellite receives official approval from NASA, it will be about the size of a suitcase and will carry four wire antennas and one box-shaped “patch” antenna. The sensitive tools will help the spacecraft pick up the incredibly subtle traces of the early universe’s hydrogen clouds.

Burns recently received another round of funding from NASA to continue to “mature” his team’s designs for the mission. NASA's Ames Research Center, UC Berkeley and the National Radio Astronomy Observatory are partners on DAPPER.

“It’s the closest we’ve come to finally being able to do this important science, so it’s exciting,” Burns said.

He’s not content to stop there. The astrophysicist has also teamed up with scientists at the California Institute of Technology and NASA’s Jet Propulsion Laboratory to develop one more mission. It’s called the Farside Array for Radio Science Investigations of the Dark ages and Exoplanets (FARSIDE). The effort could send six-feet-long rolling robots to the moon, potentially by the end of the decade. There, they will lay out more than 28 miles of wires on the moon’s surface in a spiral pattern—an unprecedented array that could detect cosmic signals from the surface of the moon itself.

During the virtual talk this month, NASA’s Bridenstine noted that efforts like DAPPER show the potential for science on the moon. He said that astronauts living in a space station orbiting the moon, or even in habitats on the lunar surface, may one day help scientists like Burns to collect their data.

“Here you have human exploration and the scientific mission directly benefitting from each other,” Bridenstine said.

NASA is about to intentionally crash a spacecraft into an asteroid. This engineer will be watching

On Monday, NASA’s Double Asteroid Redirection Test will slam into an asteroid called Dimorphos at speeds of more than 14,000 miles per hour. CU Boulder aerospace engineer Jay McMahon breaks down how this test could one day help to protect life on Earth. END_OF_DOCUMENT_TOKEN_TO_BE_REPLACED

In two years, a dust analyzer designed and built at CU Boulder will launch aboard NASA’s Europa Clipper spacecraft, aiding in its mission to determine if Jupiter's icy moon Europa has conditions that could support life. END_OF_DOCUMENT_TOKEN_TO_BE_REPLACED 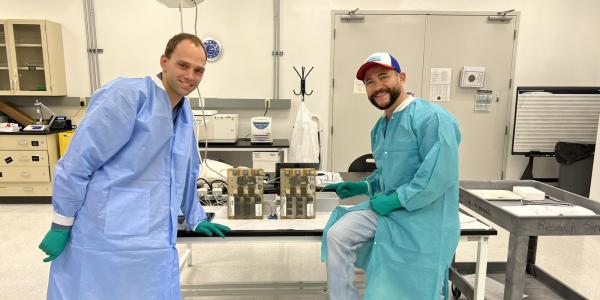 NASA's Artemis 1 mission could launch for the moon as early as Saturday, Sept. 3. Aboard will be an experiment designed by engineers at CU Boulder studying how radiation in space could impact human astronauts. END_OF_DOCUMENT_TOKEN_TO_BE_REPLACED
Return to the top of the page