Image caption: Remnants of the Hayman Fire, which burned more than 138,000 acres near Colorado Springs in 2002.

With flames racing across hundreds of square miles throughout Colorado and California this summer and a warming climate projected to boost wildfire activity across the West, residents can’t help but wonder what our beloved forests will look like in a few decades.

A new University of Colorado Boulder-led study offers an unprecedented glimpse, suggesting that when forests burn across the Southern Rocky Mountains, many will not grow back and will instead convert to grasslands and shrublands.

“We project that post-fire recovery will be less likely in the future, with large percentages of the Southern Rocky Mountains becoming unsuitable for two important tree species—ponderosa pine and Douglas fir,” said lead author Kyle Rodman, who conducted the study while a PhD student in the Department of Geography.

Previous CU Boulder studies have looked at individual fire sites, including the site of the 2000 Walker Ranch fire in Boulder County, and found that forests recovered slowly or not at all. Even 15 years post-fire, as many as 80% of the plots the researchers surveyed still contained no new trees.

The big takeaway here is that we can expect to have an increase in fire continue for the foreseeable future, and, at the same time, we are going to see much of our land convert from forest to non-forest.'

Rodman and his team of coauthors—including scientists from the U.S. Forest Service, Northern Arizona University, Colorado State University and the University of North Carolina Wilmington—wanted to build on those studies, projecting the future by looking at the past.To that end, they looked at 22 burned areas encompassing 710 square miles from southern Wyoming through central and western Colorado to northern New Mexico. The team focused on ponderosa pine and Douglas fir forests, which make up about half of the forested area in the region.

“For those of us who live along Colorado’s Front Range, these are the trees that we see, live near and recreate in on a daily basis,” said Rodman.

The study included regions that had burned as long ago as 1988, and land ravaged by the 2002 Hayman Fire near Colorado Springs; the 1996 Buffalo Creek Fire southwest of Denver; the 2000 Eldorado Springs and Walker Ranch fires near Boulder; and the 2002 Missionary Ridge fire outside of Durango.

Using satellite images and on-the-ground measurements, the scientists first reconstructed what the forests looked like prior to the fire. Then, by counting juvenile trees and looking at tree rings, they assessed how well the forests were recovering.

Not surprisingly, those at higher-elevations with lower temperatures, and more precipitation fared better. Those with  more surviving trees nearby (which can spread their seeds via wind and water) were also more likely to rebound.

Meanwhile, lower-elevation forests, like those south of Pueblo or in portions of the Front Range foothills, proved less resilient.

And compared to regions that burned in the 19th and early 20th centuries, the more recent burn areas failed to bounce back.

“This study and others clearly show that the resilience of our forests to fire has declined significantly under warmer, drier conditions,” said coauthor Tom Veblen, professor of geography at CU Boulder.

The team then used statistical modeling to project what might happen in the next 80 years if montane forests of ponderosa pine and Douglas fir were to burn under different scenarios. In one scenario, humans do nothing to reduce greenhouse gas emissions, and climate change escalates unchecked. In another, considered a “moderate emissions scenario,” emissions begin to decline after 2040.

'The future is not in set in stone'

Currently, the team estimates that about half of its study area is suitable for post-fire “recovery.” (Trees there may return to at least their lowest densities from the 1800s).

Meanwhile, Veblen notes, the number and intensity of wildfires will continue its steady rise. The number of acres burned annually across the country has already doubled since the 1990s.

“The big takeaway here is that we can expect to have an increase in fire continue for the foreseeable future, and, at the same time, we are going to see much of our land convert from forest to non-forest,” said Veblen. 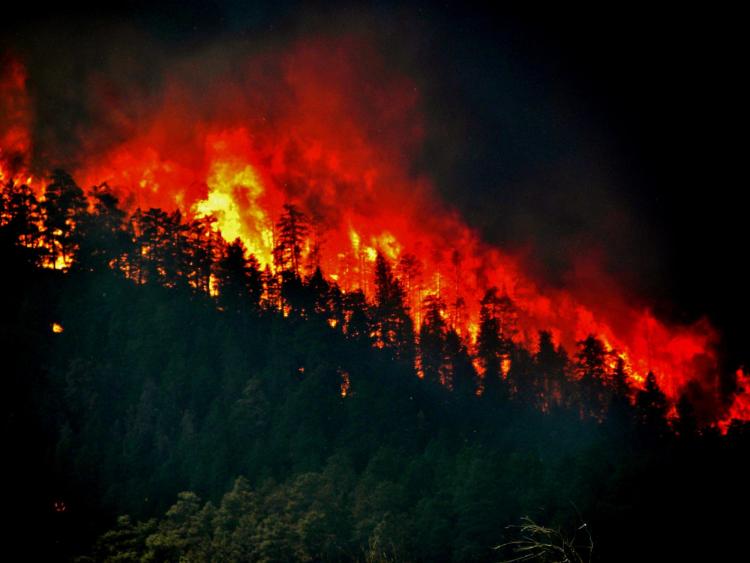 A forest burns during the High Park Fire West of Fort Collins in 2012.

Rodman, now a postdoctoral research associate at the University of Wisconsin-Madison, hopes the database of post-fire recovery he and his team have created can help land managers better plan where to invest their resources, or not, after a fire.

For instance, they may be better off planting seedlings in regions more likely to bounce back, rather than plant them in dry sites no longer suitable for their survival.

He also hopes the projections spelled out in the paper give people one more reason to care about climate change.

“This was a hard study to write and can be a bit depressing to read, but there are some positive takeaways,” he said. “If we can get a handle on some of these trends and reduce our greenhouse gas emissions, the outcomes may not look so dire. The future is not written in stone.”

Birds that can live at 14,000 feet and also breed at sea level might have evolved more quickly than previously thought. END_OF_DOCUMENT_TOKEN_TO_BE_REPLACED

Despite the Inflation Reduction Act, U.S. progress on climate change remains stuck in a climate conundrum, CU Boulder experts say, hampered by politics, complexity and the scope of the problem. END_OF_DOCUMENT_TOKEN_TO_BE_REPLACED

A CU Boulder-led study shows that between 1985 and 2019 in Brazil’s Atlantic Forest, deforestation decreased and reforestation increased on lands where Indigenous communities had been able to complete a legal process to receive formal recognition of their ancestral lands. END_OF_DOCUMENT_TOKEN_TO_BE_REPLACED
Return to the top of the page