A barn swallow in the Czech Republic stares inquisitively at the camera. (Credit: Amanda Hund)

Barn swallows live almost everywhere on the planet, recognizable by their forked tail and agility in the air. Yet while they share these characteristics, these little birds often look slightly different in each place they live—with some so distinct they’re splitting off to become new species.

Researchers at CU Boulder think that local parasites are influencing why barn swallows in Europe, the Middle East and Colorado are choosing their mates differently. Their new research, published in Evolution, finds that these parasites could be playing an important role in changing the traits displayed to attract mates early in the process of the creation of new species. 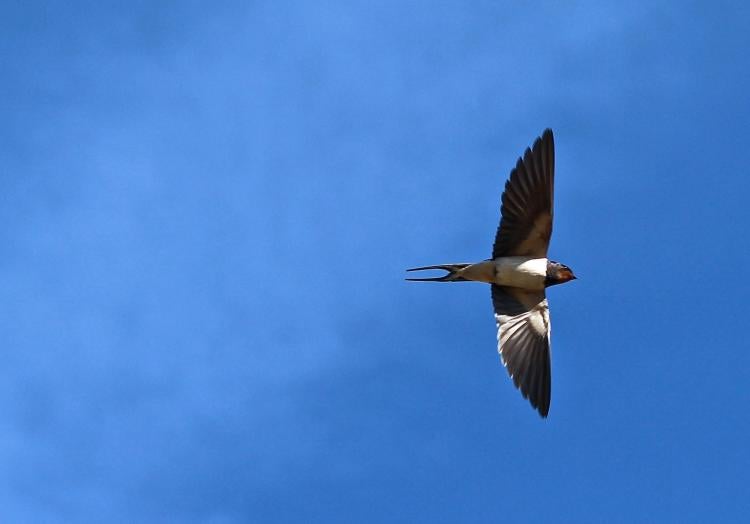 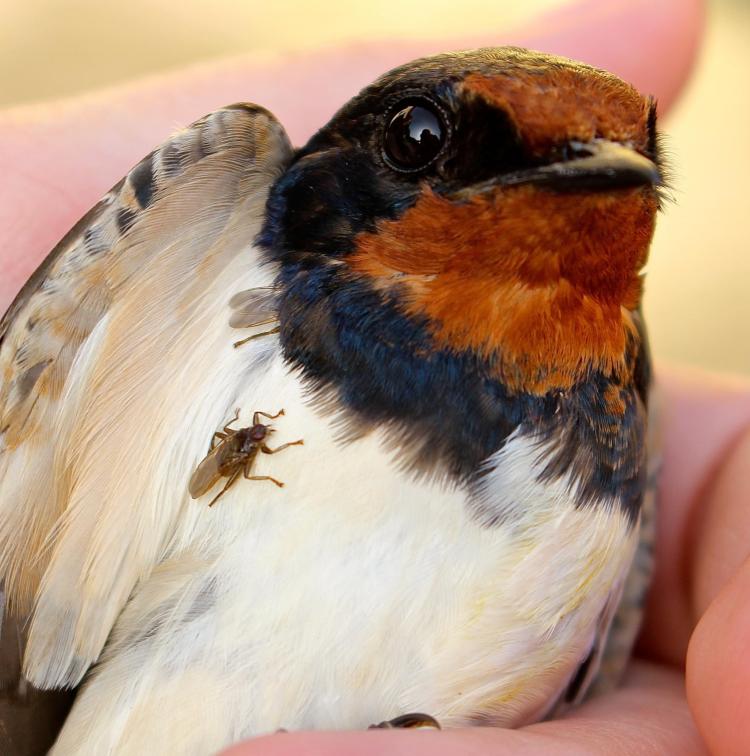 “It’s possible we haven't appreciated just how important parasites might be in shaping the evolution of their hosts,” said lead author Amanda Hund, who conducted the research as a doctoral candidate in the Ecology and Evolutionary Biology Department.

Every organism, including humans, has co-evolved with a unique community of parasites, that by definition live at the expense of their host. While they are not beneficial to us like many other microbes are, parasites have shaped our own immune system, pheromones and even our mate selection, previous research has shown.

Hund set out to characterize as many parasite communities as she could in barn swallows, to find out if they could be influencing their mate selection, and therefore the male birds’ physical traits and the creation of new species.

Hund and her colleagues studied barn swallows at sites in Colorado, the Czech Republic and Israel over four years. They measured the number and types of parasites on them, in their nests and in their blood and tracked who they chose to mate with in a given breeding season, their sexual signals—breast color, throat color and tail shape—and their health and the survival rate of their offspring.

In all but one population in the study, the most “attractive” males had fewer parasites. Somehow the male birds’ breast color, throat color and tail shape allowed females to make informed choices about their health and the likelihood of reproductive success with that partner.

Many birds also had multiple parasites with connections to the same physical trait. For example, in Colorado, males with darker breast color are less likely to have mites, but more likely to have malaria. Nest mites are detrimental to the nestlings’ survival—whereas malaria only impacts the male bird.

“Males are investing in traits to attract females, and it looks like that comes at a cost—where they are more attractive, but also more susceptible to malaria,” said Hund, now a postdoctoral fellow at the University of Minnesota. “It is a tradeoff.”

Researchers who study the origin of biodiversity, or why the Earth has so many different species, often examine which traits animals are choosing in their partners. But the real question is: Why are they choosing those specific combinations of traits?

To answer that question requires a very detailed type of scientific research, looking at the full reproductive cycle, health and survival rate of a population, in order to create a rich data set that unpacks how evolution is working between closely related populations.

“Most people are really good at characterizing the pattern. But Amanda's work is very special in terms of trying to unpack the process,” said Rebecca Safran, associate professor in the Department of Ecology and Evolutionary Biology and co-author on the study. 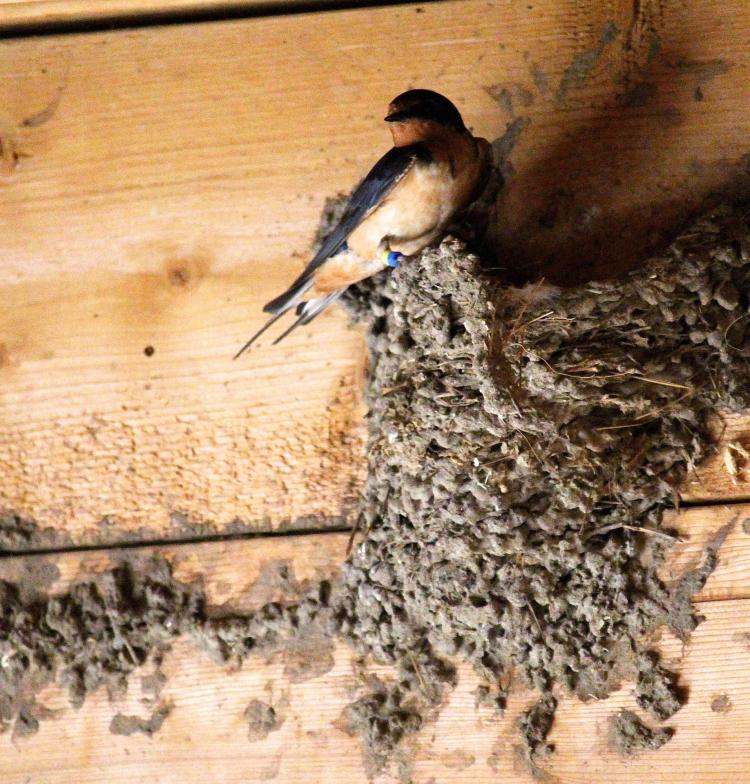 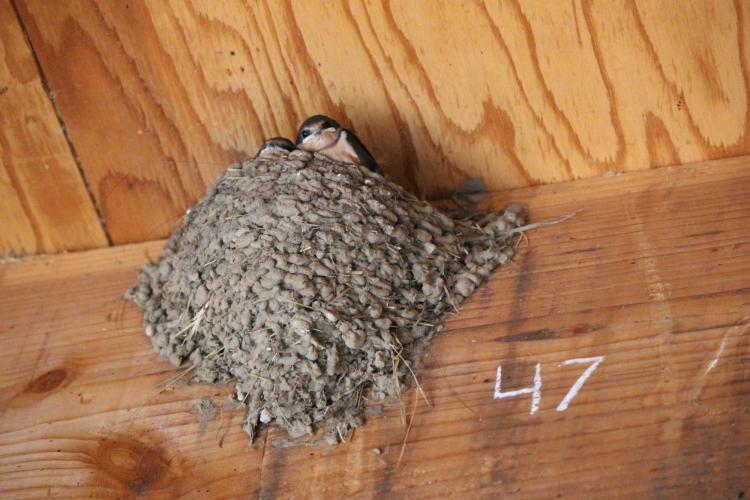 Barn swallows build nests primarily in or on human structures, like barns and bridges. These Colorado birds eye the camera curiously from their nests. (Credit: Amanda Hund)

Many factors affect the divergent evolution of species. But as opposed to something like the weather, parasites are evolving as rapidly as their host species—leading to a co-evolutionary relationship. While this has been studied in other animals, it has only previously been studied in one barn swallow population in Europe.

“These birds have evolved alongside humans for thousands of years. Every culture that we've visited seems to have its own unique story or relationship with this bird,” said Safran.

But because they nest almost exclusively in human made structures—barns, bridges, culverts and the like—barn swallows often live on private land. It turns out that winning the trust of landowners is as much a part of the work as catching the birds.

Safran has been working with dozens of collaborators all over the world for over a decade. Hund built off these connections to do this research in Europe and the Middle East, facing unique circumstances and language barriers along the way.

In Israel Hund lived on a Kibbutz, a collective community, in order to complete her research over several months. In the Czech Republic, Hund used award-winning skills from her childhood and rode horses at an equestrian center to build trust and gain access to an important nesting site.

And here in Colorado, there were landowners who were unsure or suspicious of the project at the start of the breeding season. “But by the end, they were having us over for dinner,” said Hund.

The work doesn’t stop here. The researchers are already trying to answer the next big question: why are local parasites and certain sexual traits linked?

“And once you really figure that out, you can export that knowledge and our study methods to other populations and actually watch mate selection decisions and the associated reproductive consequences unfold,” said Safran. “It’s like watching evolution in action.”

Mitigating climate change by significantly reducing carbon emissions this decade will require big transitions in all sectors, from energy and transportation to construction and industry. But significant reductions in global emissions are possible, experts say. END_OF_DOCUMENT_TOKEN_TO_BE_REPLACED

Clint Carroll, associate professor in the Department of Ethnic Studies, studies Cherokee access to gathering wild plants and land use management, and tends to the land in his own backyard. END_OF_DOCUMENT_TOKEN_TO_BE_REPLACED

With the planet already warming, technical fixes to addressing a changing climate are important, experts say, but they can only get us so far. We need social fixes, too. END_OF_DOCUMENT_TOKEN_TO_BE_REPLACED
Return to the top of the page