Smoking high-potency marijuana concentrates boosts blood levels of THC more than twice as much as smoking conventional weed, but it doesn’t necessarily get you higher, according to a new study of regular users published today by CU Boulder researchers.

“Surprisingly, we found that potency did not track with intoxication levels,” said lead author Cinnamon Bidwell, an assistant professor in the Institute of Cognitive Science. “While we saw striking differences in blood levels between the two groups, they were similarly impaired.”

The paper, published today in JAMA Psychiatry, is the first to assess the acute impact of cannabis among real-world users of legal market products. It, and more studies to come from the CUChange lab, could inform everything from roadside sobriety tests to decisions about personal recreational or medicinal use.

But the study also raises concerns that using concentrates could unnecessarily put people at greater long-term risk of side-effects.

“It raises a lot of questions about how quickly the body builds up tolerance to cannabis and whether people might be able to achieve desired results at lower doses,” said Bidwell.

Bringing the lab to the people

While 33 states have legalized medicinal marijuana use, and 11 have legalized recreational use, both uses remain illegal at the federal level. Researchers are also prohibited from handling or administering marijuana. Some previous studies have used strains supplied by the government, but those strains contain far less THC than real-world products.

In order to study what people really use, Bidwell and her colleagues use two white Dodge Sprinter vans, also known as the “cannavans,” as mobile laboratories. They drive the vans to the residences of study subjects who use cannabis they purchase on their own inside their homes and then walk out for tests. 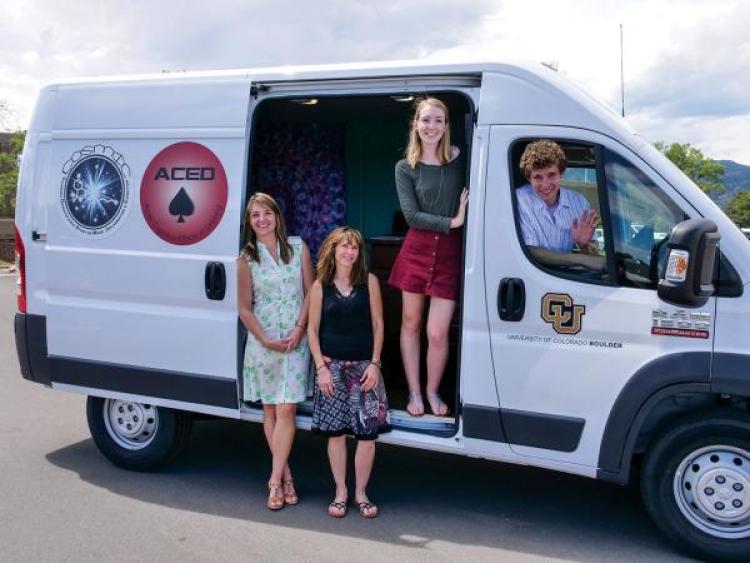 Researcher Cinnamon Bidwell, left, stands with her research team at the mobile pharmacology lab, a.k.a. the "cannavan."

Does long-term, concentrated exposure mess with your cannabinoid receptors in a way that could have long-term repercussions? Does it make it harder to quit when you want to? We just don’t know yet."

“We cannot bring legal market cannabis into a university lab, but we can bring the mobile lab to the people,” she said.

For the current study, funded in part by the Colorado Department of Public Health and Environment, the team assessed 121 regular cannabis users. Half typically used concentrates (oils, extracts and waxes that include the active ingredients without the leaves and stems). The other half of typically used flower from the plant.. Flower users purchased a product containing either 16% or 24% [tetrahydrocannabinol (THC)], the main psychoactive ingredient in marijuana. Concentrate users were assigned to a product containing either 70% or 90% THC.

On test day, researchers drew the subjects’ blood, measured their mood and intoxication level and assessed their cognitive function and balance at three time points: before, directly after and one hour after they used.

Regardless of what type or potency of cannabis participants used, their self-reports of intoxication, or “feeling high,” were remarkably similar, as were their measures of balance and cognitive impairment.

“People in the high concentration group were much less compromised than we thought they were going to be,” said coauthor Kent Hutchison, a professor of psychology and neuroscience at CU Boulder who also studies alcohol addiction. “If we gave people that high a concentration of alcohol it would have been a different story.”

Weed impairs memory, balance for about an hour

The study also found that, among all users, balance was about 11% worse after using cannabis, and memory was compromised. But within about an hour, that impairment faded.

“This could be used to develop a roadside test, or even to help people make personal decisions,” said Bidwell.

The researchers aren’t sure how the concentrate group could have such high THC levels without greater intoxication, but they suspect a few things are at play: Regular users of concentrates likely develop a tolerance over time. There may be genetic or biological differences that make some people metabolize THC more quickly. And it may be that once compounds in marijuana, called cannabinoids, fill receptors in the brain that spark intoxication, additional cannabinoids have little impact.

“Cannabinoid receptors may become saturated with THC at higher levels, beyond which there is a diminishing effect of additional THC,” they write.

The authors caution that the study examined regular users who have learned to meter their use based on the desired effect, and does not apply to inexperienced users. Those users should still be extremely cautious with concentrates, said Hutchison.

Ultimately, the researchers hope to learn what, if any, long-term health risks concentrates truly pose.

“Does long-term, concentrated exposure mess with your cannabinoid receptors in a way that could have long-term repercussions? Does it make it harder to quit when you want to?” said Hutchison. “We just don’t know yet.”

Seventy-eight years ago on Jan. 27, the Auschwitz concentration camp closed after liberation by the Soviet army. Professor Janet Jacobs, who researches genocide, trauma and collective memory, discusses the ways in which the experiences and trauma of Holocaust survivors are passed down through generations. END_OF_DOCUMENT_TOKEN_TO_BE_REPLACED

A model of your very own kidney made entirely from soft and pliable polymers? Researchers at two CU campuses are on the cusp of 3D printing realistic replicas of human anatomy. END_OF_DOCUMENT_TOKEN_TO_BE_REPLACED

Legalizing recreational cannabis does not increase substance use disorders or use of other illicit drugs in adults and may reduce alcohol-related problems, according to new research. The study also found no link between cannabis legalization and increases in cognitive, psychological, social, relationship or financial problems. END_OF_DOCUMENT_TOKEN_TO_BE_REPLACED
Return to the top of the page