Administering a vaccine. (Credit: SELF Magazine)

Step 1: Create a vaccine for COVID-19. Step 2: Distribute it across the world.

This second step may be even more challenging than the first, which is why CU Boulder researchers and the CU spinoff VitriVax Inc., are so focused on finding a way to get vaccines to 7.8 billion people.

This multidisciplinary team is working to build a pilot-scale system capable of producing 10,000 to 100,000 doses of COVID-19 vaccines per run that would be ready for use as human trials of vaccines begin in the next year. The research team is able to do so with funding, licensing and startup support from Venture Partners at CU Boulder, the university’s commercialization arm. They also received a recent grant from the Boettcher Foundation, which has awarded nearly $1 million to researchers from Colorado's top universities and hospitals to help combat the COVID-19 pandemic.

“It has to be a solution that is suitable for the entire world,” said project lead Theodore Randolph, Gillespie Professor in the Department of Chemical and Biological Engineering and co-director of the Center for Pharmaceutical Biotechnology.

The researchers are focused on a vaccine-manufacturing platform technology that addresses the need for temperature stable, single-dose formulations of novel COVID-19 vaccines at the scale required for large human clinical trials.

“If we're going to have a drug that makes it out to the market, it has to have a shelf life that's long enough so that it can be made, transported and stored at a hospital and the pharmacy, and eventually delivered to the patient. And that turns out to be two years,” said Randolph.

Most vaccines must be kept refrigerated at frozen or near-freezing temperatures to remain stable. That’s a problem when you consider that there isn’t enough refrigerated space in the world to store that many vaccine doses.

In addition, Randolph anticipates that many of the vaccines that are being tested right now—or that are in early development stages—are going to need multiple doses, which further complicates the logistics of rapidly delivering vaccines to billions of people.

“It's hard enough to get people to wear a face mask, people hate needles even more,” said Randolph.

If people haven't been adequately vaccinated with all required doses they may come back to work too early and continue to spread or be susceptible to the virus. 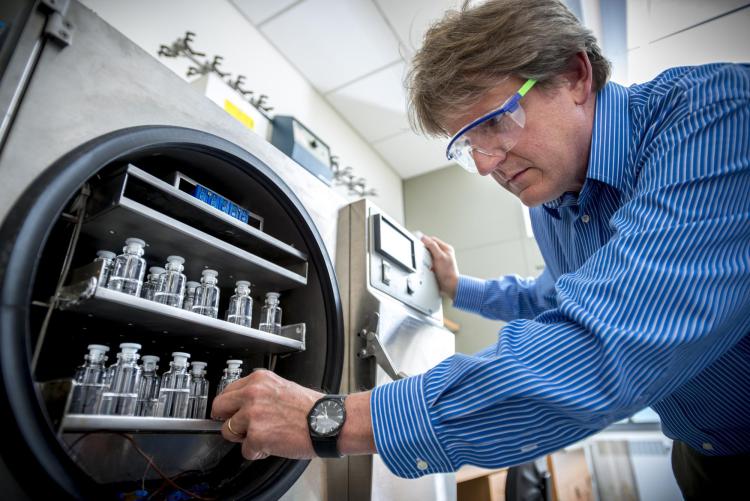 Randolph’s research group has been interested in extending the shelf life for protein-based vaccines for nearly two decades—ever since Sept. 11, 2001—when bioterrorism came to the forefront of national security concerns.

The complication was that any vaccine produced to fight a randomly timed bioterror attack would need to be created and stored for long periods until the moment it is needed.

Proteins naturally clump together. If stored improperly, vaccines will spoil in the same way that protein-based foods do.

“If you think about how long protein solutions, like milk, last in your refrigerator, you don't feel comfortable drinking that about two weeks later,” said Randolph.

Unlike the routine vaccinations people get at specific ages, for which the timing of demand is predictable, these new vaccines would need to last in storage before being used.

These vaccines can be manufactured at large scale but their short shelf life and requirements for refrigeration under carefully controlled temperature conditions complicate the logistics of their mass distribution.

The solution to the thermal stability problem, developed with CU Boulder Professor Bob Garcea in the Department of Molecular, Cellular & Developmental Biology, was to create a microscopic vial of sorts, made of sugar glass, for the vaccine. Encased in this glassy powder, the proteins cannot move around and are stable for years at a time and at very high temperatures.

Once there is a vaccine for the virus that causes COVID-19, administering it will need to be just as successful as the vaccine itself. If the vaccine needs to be administered in multiple shots —like the HPV vaccine, which requires three—this may significantly reduce how much of the global population is successfully vaccinated.

But what if one shot was all you needed?

Teaming up with Al Weimer’s group in the CU Boulder Department of Chemical and Biological Engineering, Randolph learned how to put incredibly thin layers—only nanometers thick—of metal oxides on the surface of powders.

The metal oxide that caught Randolph’s attention was alumina, which appears in nature as the crystal sapphire.

Adding an ultrathin layer of alumina on the outside of the vaccine particle does two additional important things:

First, it protects the vaccine from any moisture, which extends its shelf life. Second, the alumina—which is not soluble in water—initially resists degrading but eventually breaks down because the coating is so thin. This allows the vaccine to act like a delayed release tablet, administering a second and even a third dose weeks later without a return trip to the doctor for the patient.

“We're essentially reconstructing the vaccine using the same chemicals that have already been used for 100 years now,” said Randolph.

When COVID-19 hit, Randolph was in the middle of trying to develop this coating technology and getting it scaled up to be used for various vaccine projects with support from the Bill & Melinda Gates Foundation. He’s now hoping it can be put to use with the eventual COVID-19 vaccine.

“We have to get vaccines to the whole world,” said Randolph. “Otherwise, it's going to come back.”

A collaborative study, including CU Boulder associate professor Andrew McAdam, investigates how the risks and rewards of red squirrel reproduction are a microcosm of evolutionary patterns. END_OF_DOCUMENT_TOKEN_TO_BE_REPLACED

What happens when an expert on natural language processing asks a chatbot to write a children's book in the style of Dr. Seuss? Professor Kai Larsen put the question to the test. END_OF_DOCUMENT_TOKEN_TO_BE_REPLACED

A model of your very own kidney made entirely from soft and pliable polymers? Researchers at two CU campuses are on the cusp of 3D printing realistic replicas of human anatomy. END_OF_DOCUMENT_TOKEN_TO_BE_REPLACED
Return to the top of the page