Cockroach-inspired robot among smallest, fastest ever

HAMR-Jr poses next to a cockroach. (Credit: Kaushik Jayaram)

This machine, the brainchild of CU Boulder engineer Kaushik Jayaram and colleagues at Harvard University, gives a whole new meaning to the word small: HAMR-Jr can just about squeeze onto the surface of a penny and weighs far less than a paperclip.

But don’t let its size fool you. This four-legged robot can also carry up to 10 times its own weight in cargo and hits top speeds that, for its size, are comparable to a cheetah bounding over the Serengeti.

"HAMR-Jr can achieve gaits that approach an animal-like mechanical dexterity, demonstrating that we do not need to compromise design complexity or manufacturability to reduce the size of our robots,” said Jayaram, an assistant professor in the Paul M. Rady Department of Mechanical Engineering.

Jayaram led the design of this little-robot-that-could while he was working as a postdoctoral scholar in Harvard’s Microrobotics Lab led by Professor Robert Wood. (HAMR stands for the Harvard Ambulatory MicroRobot). It’s half the length of its predecessor, HAMR-VI, making it one of the smallest and fastest robots in the world. 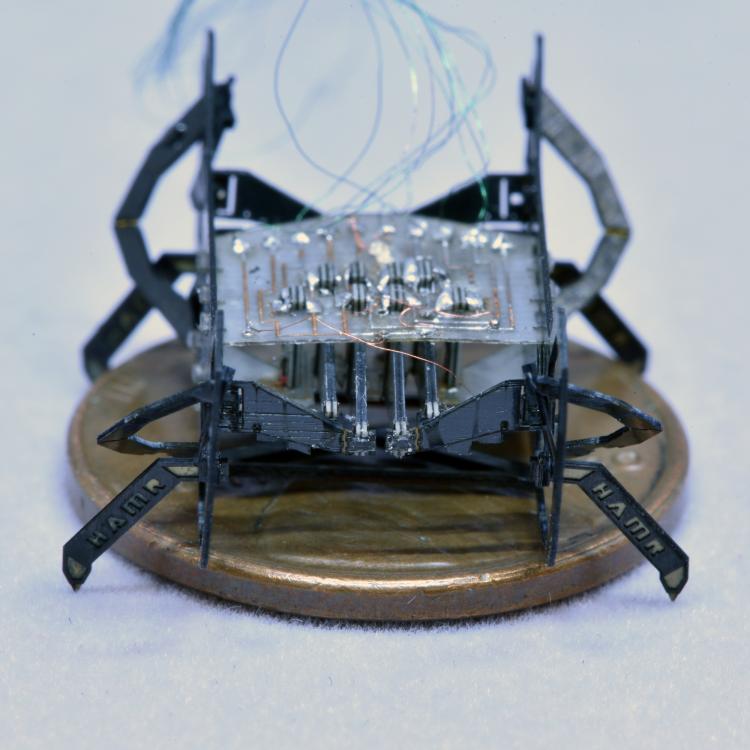 The engineer has big plans for little robots like it. One day, Jayaram said, machines the size of HAMR-Jr could crawl into airplane engines or other spaces where mechanics can’t reach to conduct needed inspections. They might even perform surgeries on human patients.“I want to build robots that can get out of the lab and run around like bugs,” he said.

Jayaram will present his group’s results virtually today at the International Conference on Robotics and Automation (ICRA 2020).

For the engineer, who joined CU Boulder this year, the project is the latest in a long line of robotic designs that take their inspiration from an unlikely source: the much-maligned cockroach.

Jayaram previously built a small robot, named CRAM, that could squish down to fit into seemingly impossible spaces, just like the urban pest can. Another of his creations was able to ram head-first into a wall and keep on running—again, like a cockroach.

“I never liked cockroaches before graduate school,” Jayaram said. “But then, over the years, I was like, ‘Yeah, you’re pretty disgusting. But you’re also pretty useful as a model organism that we can learn things from.’”

HAMR-Jr, which was designed to mimic the speed and maneuverability of the loathed insect, brought its own set of engineering challenges.

Take power. Traditional motors won’t work in a robot this size. They overheat when they get too small. So, the Harvard team powered HAMR-Jr using tools called “piezoelectric actuators”— thin materials that bend when you hit them with an electric voltage.

HAMR-Jr may also be one of the most high-tech paper airplanes out there. To make a robot that small, Jayaram explained, the researchers begin by using a laser to etch the shape of its body parts into a sheet of carbon fiber composite.

Those sore eyes paid off: HAMR-Jr can turn right and left and even scoots backward. It also runs at a pace of nearly 14 of its own body lengths, or about one foot, per second. For comparison, cheetahs, the speed demons of the mammal world, sprint at roughly 16 body lengths per second.

HAMR-Jr is just the beginning, Jayaram added. Engineers could, theoretically, use his team’s same methods to make even more petite robots—the size of a pencil eraser or smaller. 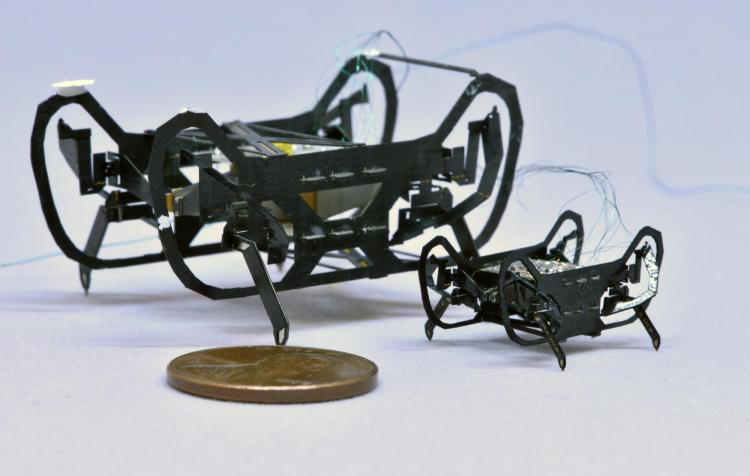 “We showed that our design and fabrication methodology is highly scalable,” Jayaram said. “We could shrink everything down or scale it up, and the robot would still work.”

Now at CU Boulder, Jayaram wants to see what other inspirations he can glean from insects: Could he make a tiny robot with six or eight legs, instead of HAMR-Jr’s four? What about a small robot that is flexible enough to survive getting stepped on?

There’s nothing you can’t do, in other words, when you’ve got cockroaches on your side.

“I’m interested in problems that are at the edges of biology and engineering,” Jayaram said. “What can biology do that engineering can’t?”

Scientists from three countries report that materials inspired by nature could one day help engineers design new kinds of solar panels, robots and even coatings for ultra-fast jets. END_OF_DOCUMENT_TOKEN_TO_BE_REPLACED

This molecular link within iodine’s atmospheric interactions can be added to global atmospheric and climate models to help scientists better understand its environmental impacts. END_OF_DOCUMENT_TOKEN_TO_BE_REPLACED
Return to the top of the page