This educational tool, produced by a company called Edboard, seeks to help kids learn about electrical engineering in a fun and engaging way. (Credit: Edboard) 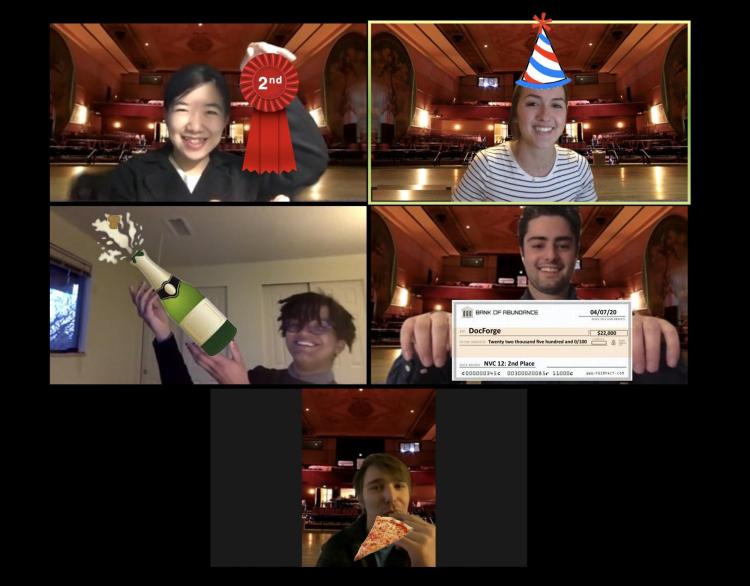 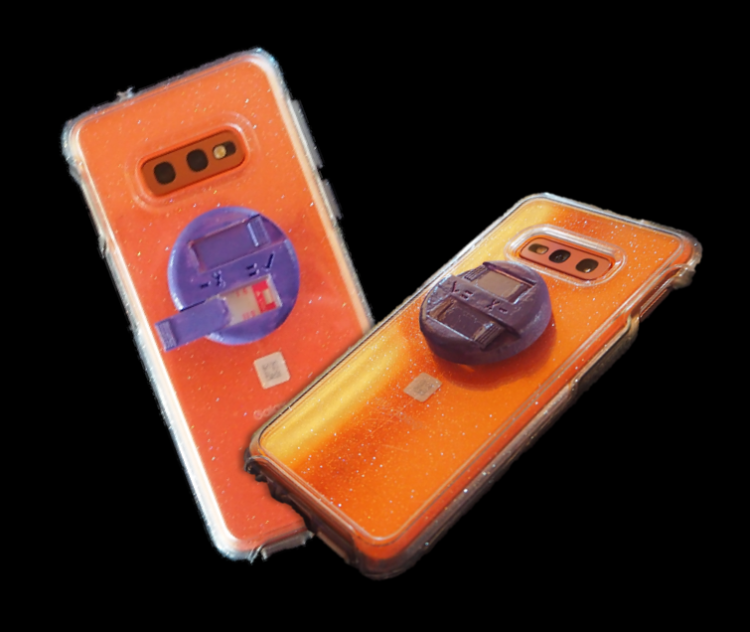 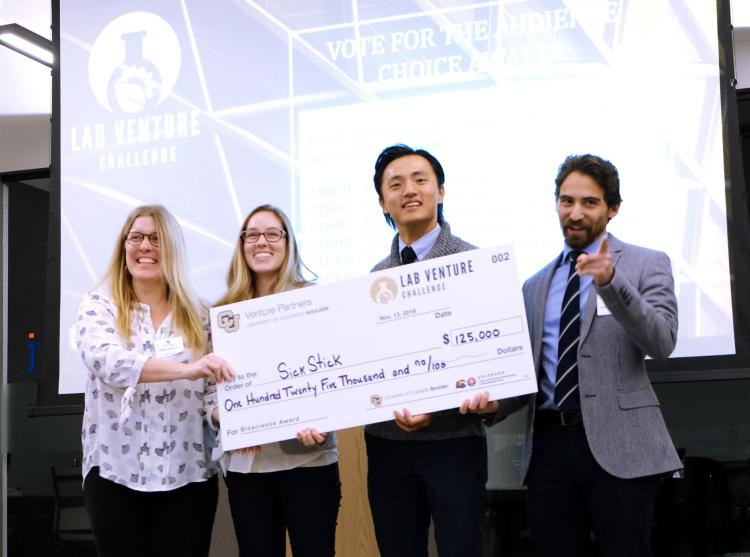 There was no confetti and no red carpet at this year’s virtual final event for the New Venture Challenge (NVC) on April 7, a showcase for entrepreneurship at CU Boulder.

But the six startup companies vying to take home more than $100,000 in prize money and investments still had fun: Competitors wore bolo ties and suit jackets over shorts (conveniently out of view), while emcee extraordinaire Brad Bernthal spoke from his home computer and adopted a lint roller as a microphone.

“We’ve staged the NVC championships amid adversity before. We’ve twice been hit by April snowstorms,” said Bernthal, an associate professor of law at CU Boulder, at the start of the festivities. “But we’ve never seen anything like this.”

Luckily the startups, many of which were led by CU Boulder students, stood out more than Bernthal’s occasional impression of a wrestling announcer. The top spot at the online gala went to Darwin Biosciences and its SickStick. This device analyzes saliva samples to test if people have been exposed to contagious diseases in less time than it takes you to cook your breakfast.

For its efforts, Darwin Biosciences, headed by CEO Nicholas Meyerson, won $30,000 in prize money and $25,000 in investment offers.

“It really is an incredible honor,” said Meyerson, a postdoctoral research associate at the BioFrontiers Institute at CU Boulder. “[We are] truly just trying to make a difference in people’s lives. This is just going to propel us forward in ways we couldn’t have imagined.”

The award was a fitting cap to the NVC, which did not hold an in-person ceremony for the first time in its 12-year history because of the coronavirus pandemic. Meyerson and his colleagues are currently working to adapt SickStick for that same crisis, and hope to use the tool soon to begin screening patients for COVID-19 infections.

As Jeremy Bloom, one of the NVC judges and a former CU Buffs football player, put it: “It’s not often that you can be an entrepreneur and save people’s lives.”

How to save a life

It was one of the evening’s themes.

For the six finalist teams, the night was a grueling one: They each delivered a 5-minute video pitch, then answered a series of questions from four Shark Tank-style judges.

Helping people was certainly the motivation for Frenz, the company behind CheckPls. This tool might look like one of the Pop Sockets accessories you snap onto your phone, but CEO Zayna Pieper and her colleagues designed it to keep college students safe. It’s easy: You dip your finger into a beverage, touch the test strip hidden inside the device, and CheckPls will screen your drink for six common date-rape drugs.

“Everybody has the right to choose what they consume,” said Pieper, an Engineering Plus student at CU Boulder.

Mycobacteria Therapeutics, which includes several researchers from CU Boulder, has taken a different tack. The company is looking for better ways to treat post-traumatic stress disorder, and it’s asking bacteria for help. The group developed a microbial cocktail, a type of treatment called “immunobiotics,” that can reduce brain inflammation in people struggling with PTSD.

“I have seen a veteran go into a full-on panic attack in the middle of the VA because their PTSD was triggered by crowds and loud noises,” said Christopher Stamper, an assistant professor at the CU Anschutz Medical Campus who earned his PhD at CU Boulder. “This is truly a debilitating disorder.”

Rounding out the NVC finalists were Soulutions Tech, a team working to “give people with Parkinson’s their voice back,” and EdBoard, which designs engineering education tools for kids. A company called DocForge netted second place, and nearly $50,000 in cash and investments, for its work to make technical documentation easier for businesses across the country.

The six startups all left the event with at least $10,000 more in their pockets, an apt reward for months spent honing their products and strategies. They were selected from a starting pool of 146 competitors, a record for the NVC.

The challenge’s organizers also had to learn how to scramble, pulling together an all-remote event with several weeks’ notice. Despite that shift, more than 800 people registered to attend the remote shindig, a bump over last year’s 664.

“I never would have thought we would only have a few weeks to pivot from an in-person event at the Boulder Theater to a completely virtual event with 824 people tuning in,” said Sara Jennings, NVC’s director. “Our startups, judges and operational team adapted quickly in true entrepreneurial fashion.”

“Our greatest challenges often bring out the best in us,” Fiez said. “With a record 146 teams competing in NVC this year, the true entrepreneurial spirit shone through [Tuesday] night with an all-online finals. Best NVC yet.” 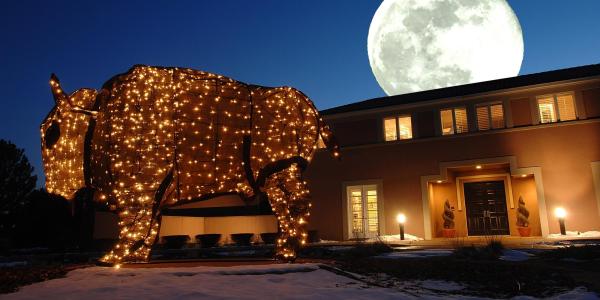 Christina Cain, Heather Cracraft, Jasimine Evans and Debbie Yeh are being recognized for their exceptional service and contributions to the CU Boulder community. END_OF_DOCUMENT_TOKEN_TO_BE_REPLACED 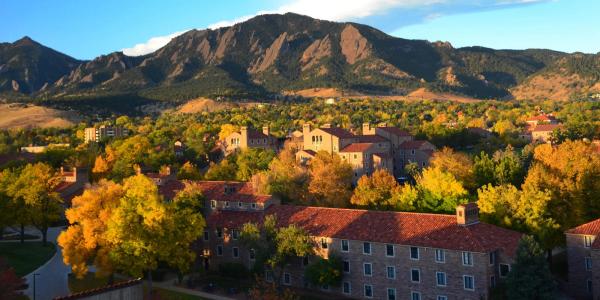 The diversity of disciplines represented by these 17 faculty members highlights the range of excellence in research, scholarship and creative work taking place at CU Boulder. END_OF_DOCUMENT_TOKEN_TO_BE_REPLACED 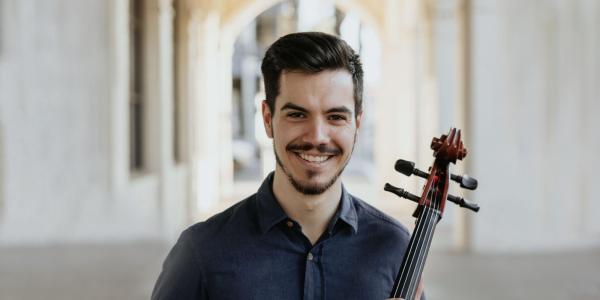