Josue Saénz Treviño, a renowned collector of antiquities, probably didn’t know what he was getting himself into when he unwrapped the little manuscript, no bigger than a cocktail napkin.

The year was 1965. Saénz, then president of Mexico’s Olympic Committee, had just hopped on a plane and flown to a spot somewhere near the states of Chiapas or Tabasco. There, as Saénz would later reveal, he met with a group of grave robbers who presented him with the booklet.

“All of this was shady but, sadly, not illegal at the time,” said Gerardo Gutiérrez, a CU Boulder archaeologist who studies pre-colonial peoples of the Americas.

It was also potentially the find of Saénz’s life. The document itself bore a series of paintings on bark paper depicting the passage of Venus through the night sky. They were intricate, colorful and, at least on the surface, seemed to date back hundreds of years to the height of Maya civilization.

As far as scholars knew, only three such books, called Maya codices, had ever been discovered, and all of them were sitting in museums in Europe. What Saénz held in his hands might be a long-lost fourth.

It could also have been a forgery.

More than four decades after that fateful plane ride, Gutiérrez served on a scientific team that set out to answer the question once and for all. The archaeologist turned art detective uses high-tech tools to probe the secret lives of paintings, ceremonial masks and more.

Recently, he published the first English translation of his team’s findings for the Pre-Colombian Society of Washington, D.C. The archaeologist, whose career spans two decades and several continents, is using the opportunity to reflect on his most nerve-wracking case to date—one that brought him face-to-face with what may have been the oldest surviving book from the Americas.

“I was worried because I was walking into a debate that had gone on for decades, and nobody was going to be happy about the results,” said Gutiérrez, an associate professor in the Department of Anthropology. “It was very risky.”

A section of the Grolier Codex. (Credit: Gerardo Gutiérrez)

The detective in his lab

A couple of years later, Gutiérrez shows off what he calls his “mobile laboratory” from his office on campus. It includes a wide range of portable instruments, such as ultraviolet and infrared lights and several different kinds of microscopes. 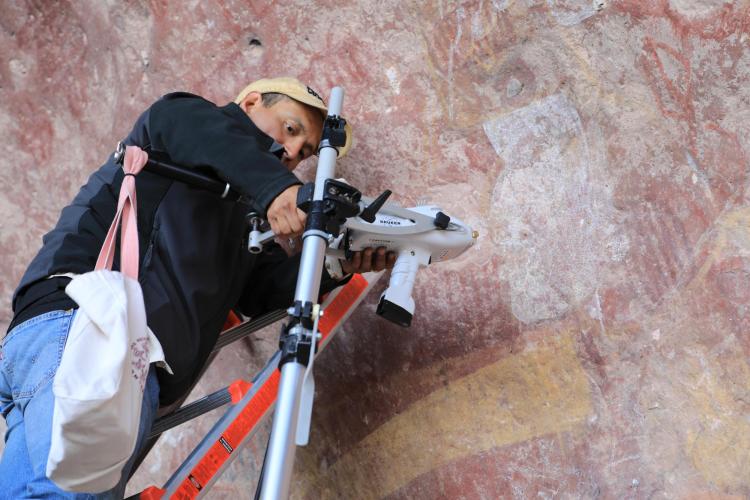 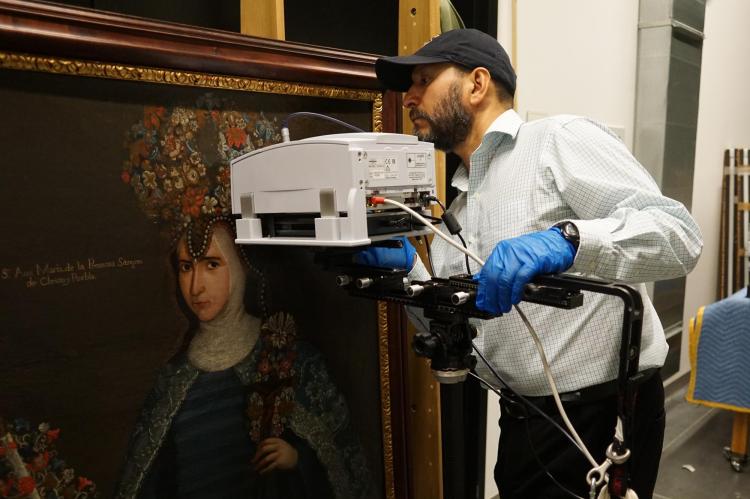 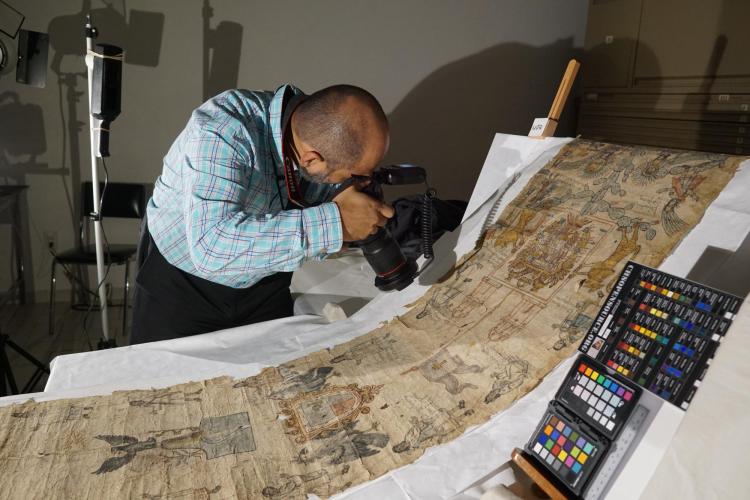 Top: Gerardo Gutiérrez uses a device called an X-ray fluorescence (XRF) spectrometer to scan a mural painted on a rock shelter called Cauadzidziqui in the Mexican state of Guerrero; Middle: Gutiérrez studies a portrait of a novice nun painted in the 1700s in Mexico; Bottom: Gutiérrez photographs a scroll called the Codex García Granados, which was painted much later than the Grolier Codex. (Credits: Gerardo Gutiérrez)

He pulls out one scientific tool, a device called an X-ray fluorescence (XRF) spectrometer, that looks like a sci-fi ray gun.

“Do you remember in Star Trek when they would have to identify the components of objects on different planets?” he said. “This does the same thing.”

It also helps Gutiérrez to pursue his obsession with color and, in particular, pigments.

The archaeologist has brought his mobile lab with him to collections from all over the world in American and Mexican museums through an effort he calls the Colors of History Project. Gutiérrez uses these tools to examine the chemistry underlying everything from ancient cave paintings to Renaissance-era portraits.

His favorite pigment is called Maya Blue. Made by mixing the indigo plant with a type of clay, this molecule looks more turquoise than a deep blue. The color appears in a lot of artwork from buildings in pre-colonial Mesoamerica to Spanish colonial churches, in part because of its staying power.

“It’s really an immortal pigment,” Gutiérrez said. “You can put anything on it—strong acids and bases. You can expose it to weathering and, more importantly, time. It won’t degrade. The only thing Maya Blue can’t resist is direct fire.”

It was Gutiérrez’s experience with this immortal pigment that brought him face-to-face with the manuscript that Saénz purchased all those decades ago.

The case of the codex

What happened in the years after Saénz bought the booklet off of the grave robbers in 1965 is murky. In 1972, however, it turned up in New York where its pages were displayed on black velvet in the Grolier Club, a haunt for the city’s blue bloods.

Known as the Grolier Codex, the book soon became caught up in the rivalry between two competing schools of Maya scholars. One claimed that the book was authentic, while the other contended that the manuscript was merely a clever forgery.

The debate lingered for decades. In 2016, a U.S.-based team claimed that it solved the mystery, but some experts considered the researchers too biased and downplayed their results.

One year later, Mexico’s National Institute of Anthropology and History decided to put the question to rest for good. It assembled a dream team of scientists from several different universities in Mexico—plus Gutiérrez and his CU mobile lab.

The researcher still remembers seeing the book for the first time. By that point, it was stored in the basement of the National Museum of Anthropology in Mexico City in a vault Gutiérrez compares to Fort Knox. He was blown away by the sheer detail of the paintings. One illustration depicted a being who scholars call the Death God wearing a jaguar headdress. Another showed a second god with the legs of an eagle. 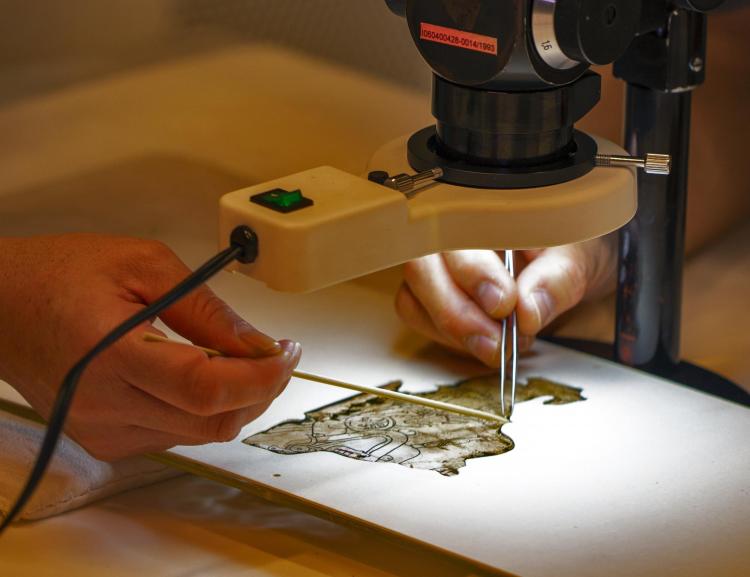 Members of Gutierrez's team (carefully) remove a tiny sample for analysis from a section of the Grolier Codex. (Credit: Gerardo Gutiérrez)

“It was just amazing seeing it,” he said. “But as a scientist, I had to hold my feelings in.”

Gutiérrez and his colleagues probed the document using his XRF machine, microscopes and more. But the silver bullet came down to Maya Blue. Using X-ray fluorescence spectrometry and other tools, the team found the pigment hiding in an illustration of water.

That was significant, Gutiérrez said, because at the time when Saénz met with his grave robbers, not a single person knew how to recreate the pigment.

“I knew we had it,” Gutiérrez said. “But it wasn’t until one of the other teams sent me a photograph by email of a scanning electron microscope image that clearly showed Maya Blue when I said, ‘Yes, that’s it.’”

The book, in other words, was undeniably a fourth Maya codex. Other analyses suggested that the manuscript dated back to the 11th or 12th centuries, a timeline that made it the oldest known American book. It also remains the only codex that resides in Mexico.

With the mystery solved, Gutiérrez is planning his next high-profile case. He’s examining whether there might be two different recipes for making Maya Blue—one pioneered by Maya around 300 AD, and another by the Mixtecs and Aztecs much later in 1300 AD.

For now, Gutiérrez is satisfied that the fourth Maya codex, still in its vault, will finally get some peace.

“It’s time to stop using it as a lab rat where every year another team comes and takes pieces of it,” he said. “We have to begin to treat this document with the respect it deserves.”

A collaborative study, including CU Boulder associate professor Andrew McAdam, investigates how the risks and rewards of red squirrel reproduction are a microcosm of evolutionary patterns. END_OF_DOCUMENT_TOKEN_TO_BE_REPLACED

What happens when an expert on natural language processing asks a chatbot to write a children's book in the style of Dr. Seuss? Professor Kai Larsen put the question to the test. END_OF_DOCUMENT_TOKEN_TO_BE_REPLACED

A model of your very own kidney made entirely from soft and pliable polymers? Researchers at two CU campuses are on the cusp of 3D printing realistic replicas of human anatomy. END_OF_DOCUMENT_TOKEN_TO_BE_REPLACED
Return to the top of the page