For more than 40 years, visitors have flocked to the CU Museum of Natural History to catch a glimpse of one big dinosaur specimen: the fossil skull of an ancient Triceratops that’s nearly the size of a Mini Cooper.

Now, that same three-horned animal, housed in the museum’s Paleontology Hall on the CU Boulder campus, is ready for its close-up.

The museum recently released an interactive 3D scan of its Triceratops skull, giving dinosaur buffs of all ages the chance to explore the fossil’s bumps and divots from their laptops.

For some in Boulder, the scan will provide a fresh look at an old friend. But it also highlights how the museum is using new technology to better preserve Colorado’s past, said Jaelyn Eberle, curator of fossil vertebrates.

“When you go to a family day, you’re going to see kids crowding around our Triceratops,” said Eberle, also a professor in the Department of Geological Studies. “I think it’s important, both from an education perspective and for its research potential.”

The scan itself is the handiwork of a team of students—participants in a first-ever course offered by CU Boulder’s Museum and Field Studies graduate program that focuses on new and emerging technologies in the museum world.

Carlton Shield Chief Gover, a PhD student in the Department of Anthropology, helped to take those snapshots.

To collect the scan, he and his fellow students in the technology class used a device that looked a bit like a police radar gun on steroids. The museum bought the device from the Broomfield-based 3D Printing Colorado. In all, the team needed just a few minutes to record every inch of the skull, creating a detailed, high-resolution scan stretching from the Triceratops’s horns to its fan-shaped frill. 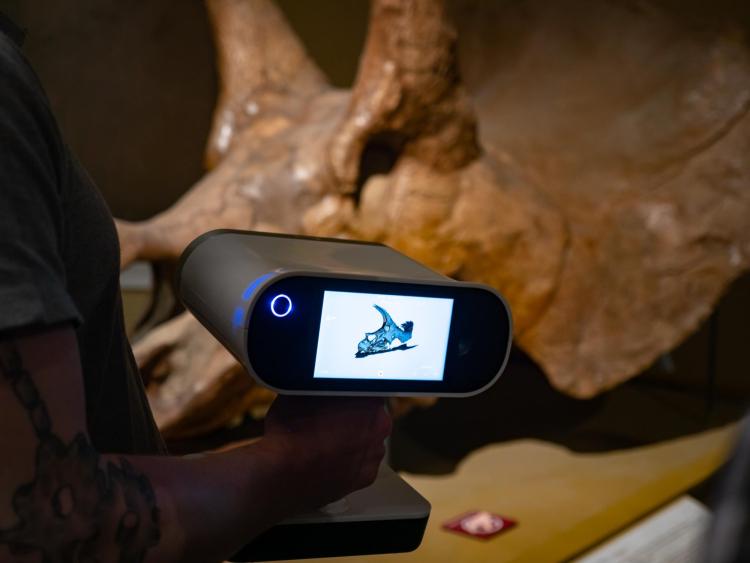 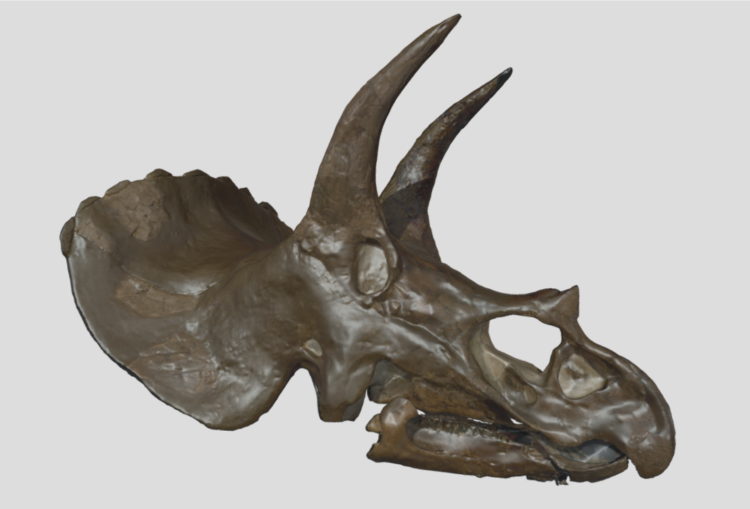 “These new technologies can help us to better share information and data between researchers, but also develop materials for educating the public,” said Shield Chief Gover, who also works in the museum’s new Archaeozoology Lab.

William Taylor, who leads that lab, added that the university has begun a major push to digitize its archaeozoological collections—capturing a record of animals from the Cretaceous Period through the modern era, all in ones and zeros.

Many of the museum’s specimens, including collections of unfossilized bone from animals younger than the Triceratops, can be surprisingly fragile, Taylor said.

“It’s become an ethical obligation to fully digitize these specimens and share them with the world,” said Taylor, also an assistant professor of anthropology. “In our museum, we’re taking care of a huge amount of Colorado’s past.”

The project also provides a chance for Coloradans to better get to know their local dinosaur, which belongs to the species Triceratops horridus.

Famed fossil hunter John Bell Hatcher discovered the skull, plus a partial skeleton from the same animal, on a wintry day in 1891 near the town of Lance Creek, Wyoming.

“Who hunts for fossils in December in Wyoming is beyond me,” said Eberle, a graduate of the University of Wyoming.

Hatcher’s find held a place of honor at the Smithsonian Institution in Washington, D.C., for years. In the late 1970s, the Smithsonian loaned it to CU Boulder. The skull arrived in the middle of a January blizzard and was assembled on the spot in the Paleontology Hall.

“I think that the Triceratops belongs in our museum because this would have been its home territory, too,” said Eberle.

These herbivores were once a common fixture of what is today the American West, much like elk are today, she explained.

At the time, near the tail end of the age of the dinosaurs roughly 68 to 66 million years ago, Colorado would have been a balmier place to live. The museum’s Triceratops, for example, may have once rubbed shoulders with alligators and even rested in the shade of palm trees.

Paleontologists from across the country still travel to Colorado to inspect the skull in person, too, Eberle said—in part because it is still a remarkably intact representative of this long-extinct species.

“When I think about my time at CU, the Triceratops has certainly been one of the main draws for me at the museum,” she said.

Stay tuned for more digital creations from the CU Museum of Natural History on Twitter at @cumuseumofnh, and follow the Archaeozoology Lab on Instagram at @cuarchaeozoology.

A collaborative study, including CU Boulder associate professor Andrew McAdam, investigates how the risks and rewards of red squirrel reproduction are a microcosm of evolutionary patterns. END_OF_DOCUMENT_TOKEN_TO_BE_REPLACED

What happens when an expert on natural language processing asks a chatbot to write a children's book in the style of Dr. Seuss? Professor Kai Larsen put the question to the test. END_OF_DOCUMENT_TOKEN_TO_BE_REPLACED

A model of your very own kidney made entirely from soft and pliable polymers? Researchers at two CU campuses are on the cusp of 3D printing realistic replicas of human anatomy. END_OF_DOCUMENT_TOKEN_TO_BE_REPLACED
Return to the top of the page