A physicist who knows what matters: A good punchline 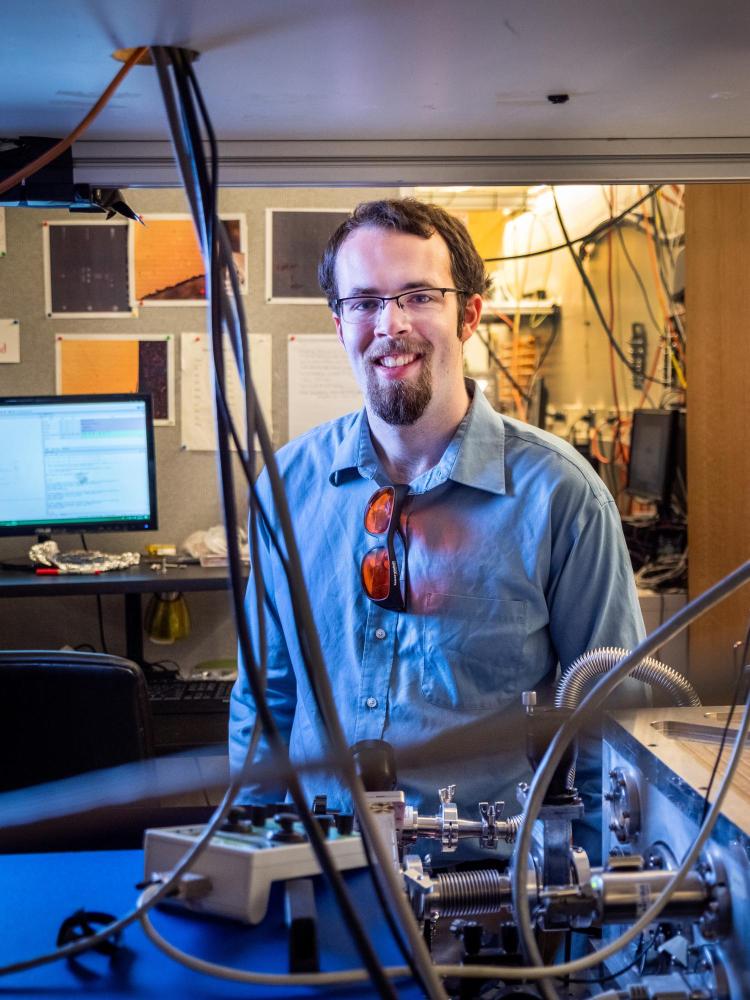 Have you heard the one about the physicist who got pulled over for speeding? It was Werner Heisenberg, who articulated the uncertainty principle, in which the position and the velocity of an object cannot both be measured exactly, at the same time. He was driving fast on a highway late one night and got stopped by the highway patrol. When the officer asked him, ‘Do you know how fast you were going?’ Heisenberg replied, ‘No, I don’t. I may not know how fast I was going, but I do know where I am.’”

And have you heard the one about the physicist at CU Boulder who is a comedian and regales audiences with jokes like these during his improv routines?

Robert Karl earned his PhD in physics in December. Since 2014, he has been working on nanoimaging in the CU Boulder lab of professors Margaret Murnane and Henry Kapteyn. When not in the lab, he works on jokes and performs in weekly comedy shows on campus.

“There’s a stereotype about scientists as being nerdy, aloof and boring,” Karl said. “I like to think I defy that narrative. This laser stuff is a huge part of who I am. But my other side, my comedy side, is very different.”

Karl performed in many theater productions while growing up in Redding, Connecticut, and has turned those experiences into a passion for improv comedy.

“That’s what I do when I’m not in the lab tuning lasers,” he said.

On the physics side of things, Karl builds microscopes that use extreme ultraviolet light to study nanoscale dynamics. Using ultrafast lasers to generate acoustic waves in materials, he has captured videos of those acoustic waves propagating, which allows him to measure physical properties of new materials.

To get the microscopes to work, Karl uses lensless imaging techniques, since there are no lenses for extreme ultraviolet light. The lensless imaging techniques use data derived from light scattering from the sample, which in that case was a nickel nano-antenna, and computationally reconstructs an image of what the sample had to have been to scatter the light in that way. 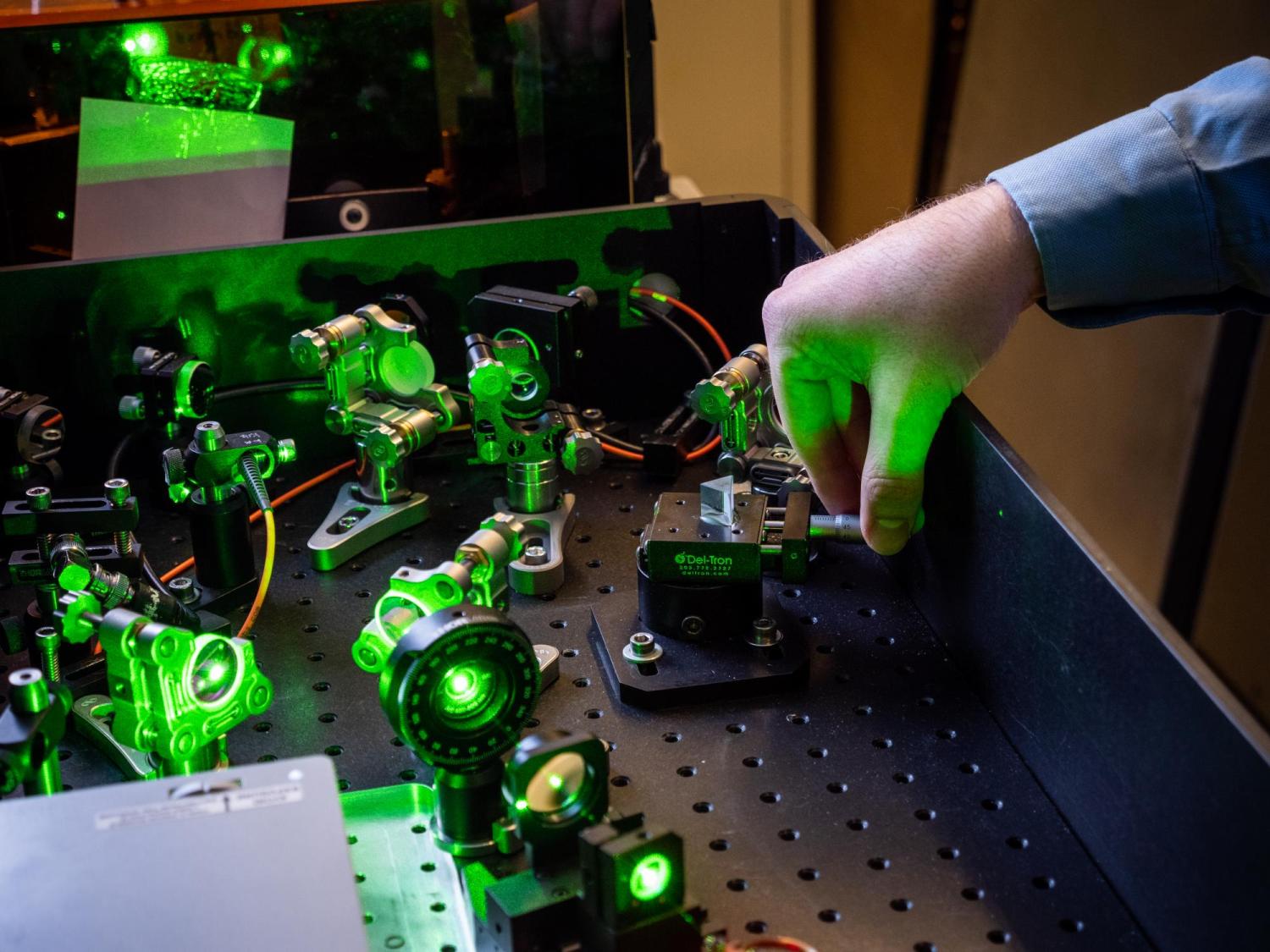 “The main thing we’re looking to discover is new physics,” said Karl, who is quick to joke about his research. “What I do on a day-to-day basis is go down to our laser lab, turn tiny knobs to make the high-power laser point in the right direction and use very short pulses.”

Of course, there’s more to it than that.

“What we’re able to look at with these light sources are things on the nanometer scale, tens of nanometers, a second or less of time. The biggest application happening is with imaging microscopy. Being able to image things of that size is key to understanding how they work.”

Science for its own sake, Karl maintains, opens new avenues to greater science.

“We don’t necessarily know where it all will lead when we start,” he said. “In some sense it’s only by pursuing what is interesting that we can learn something truly new. If we understand how matter behaves in a high-energy plasma state, we have a better understanding of how other plasmas behave in the stars or in the early universe. There are connections.”

“When I was a kid, my parents told me that I was too smart for my own good,” Karl said. “My dad has a story he loves to tell. When I was really little, we were getting ready for bedtime and he was getting a book to read me a story. And I came out with, ‘Actually mom and dad, do you mind if I go up to my room and read by myself? You guys read too slow.’ My dad’s response to that was, ‘Buddy, you can read?’”

Karl is moving to Santa Barbara, California, in January for a position with Lockheed Martin, where he will conduct research on infrared sensors.

“It will be a bit of a step outside the knowledge and tools I’ve developed over the years,” he said. “But I’m viewing it as a cool opportunity to learn a lot about infrared sensors that I don’t already know.”

Karl is grateful for the many hands-on opportunities he has had at CU Boulder to participate in a variety of laboratory experiments.

“I was the person who kept the laser beam working,” he said. “Which is good, because I was the guy who used the laser beam. And I got to learn all about lasers and X-rays.”

And he enjoys experimenting in the comedy realm as well.

Three physicists, Pascal, Newton and Joule walk into a bar… 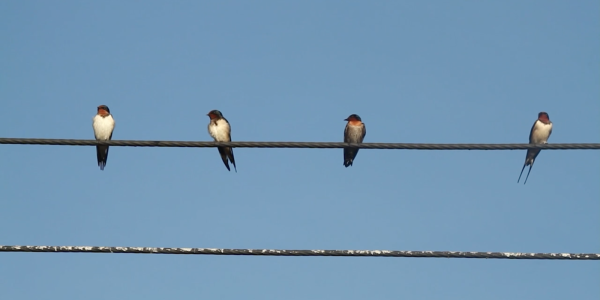 The honors project of Avani Fachon, a CU undergraduate in ecology and evolutionary biology, shines light on the interaction between humans and barn swallows. END_OF_DOCUMENT_TOKEN_TO_BE_REPLACED 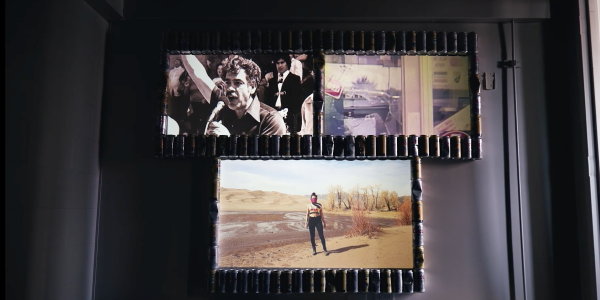 Andrea Fautheree Márquez’s project, “Chicana Light,” which explores the Chicano civil rights movement in Colorado, is also “a love letter” to her parents, who were activists in the movement. END_OF_DOCUMENT_TOKEN_TO_BE_REPLACED 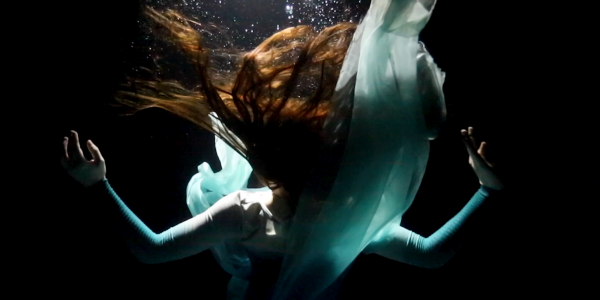 Students go to great lengths to create their honor’s theses. Combining her passions for environmental sustainability, self-expression and the element of water, Rae Lewark tells the story of water's lifecycle through free diving and dance. END_OF_DOCUMENT_TOKEN_TO_BE_REPLACED
Return to the top of the page