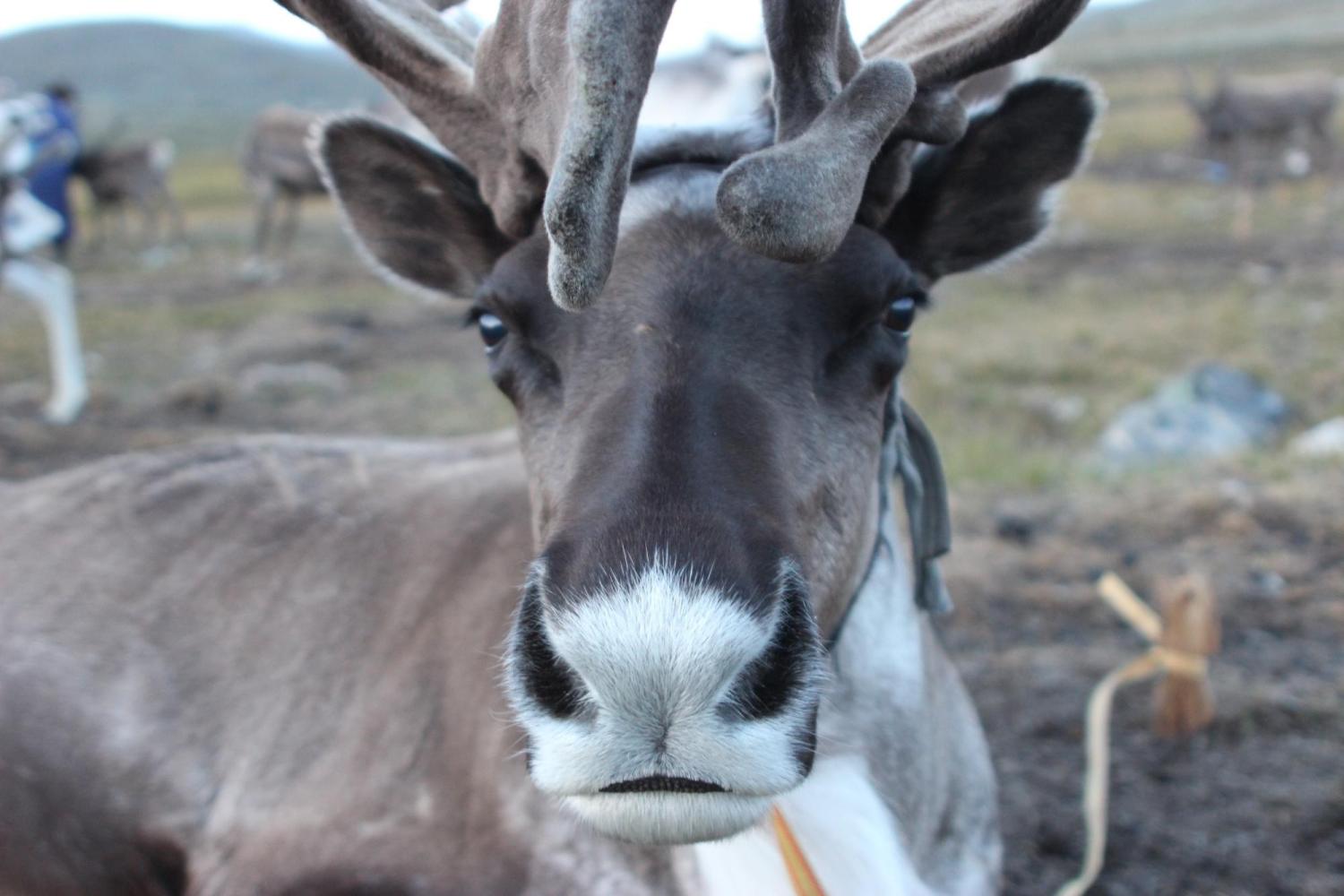 Deep in the Sayan Mountains of northern Mongolia, patches of ice rest year-round in the crooks between hills.

Locals in this high tundra call the perennial snowbanks munkh mus, or eternal ice. They’re central to lives of the region’s traditional reindeer herders, who depend on the snowy patches for clean drinking water and to cool down their hoofed charges in summer months. 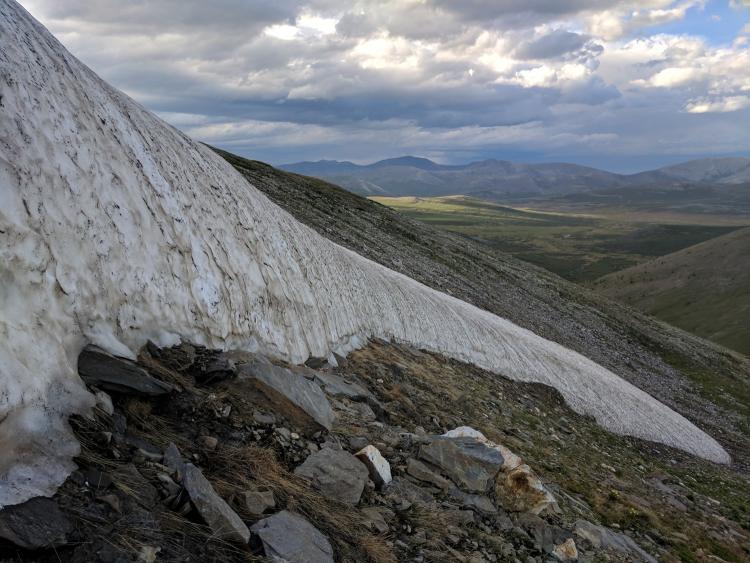 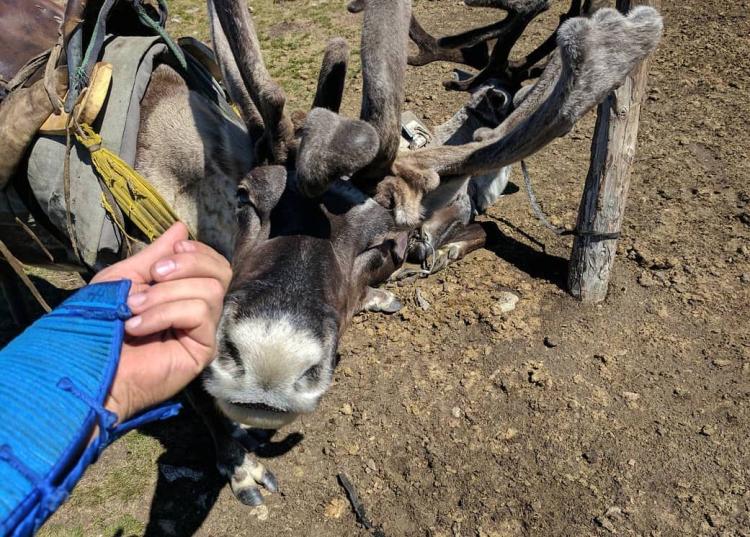 Top: A patch of "eternal ice" in the Sayan Mountains; Bottom: A domesticated reindeer comes in for a nuzzle. (Credits: William Taylor)

Now, a new study led by archaeologist William Taylor suggests that this eternal ice, and the people and animals it supports, may be at risk because of soaring global temperatures.

“What’s unique about reindeer herding is how closely it’s tied to this very fragile thing—the ice,” said Taylor, formerly of the Max Planck Institute for the Science of Human History and now an assistant professor in the Department of Anthropology at CU Boulder.

For research published Nov. 20 in the journal PLOS ONE, he and his colleagues conducted a survey of reindeer herders to learn more about their relationship with that fragile ice. And, the team discovered, the once-reliable munkh mus seems to be melting faster than at any time in recent history.

These patches of ice also contain some of this region’s only archaeological evidence of the deeper history of reindeer herding and pastoralism, Taylor said. The potential loss of that evidence highlights the threats climate change poses to the world’s cultural heritage.

“If we lose these unique cultural systems and ways of life, we’re losing the diversity of approaches and knowledge that we have as a species to deal with the future,” said Taylor, also a curator in the CU Museum of Natural History.

The archaeologist first discovered munkh mus for himself in the fall of 2017. That year, he traveled to the cold and windy Sayan Mountains to look for evidence of humanity’s ancient domestication of horses and other animals.

But Taylor, who grew up in Montana with a family history of ranching, felt a sense of kinship with the valley’s modern reindeer herders, the Tsaatan. These people, who today comprise just 30 families, cultivate large stocks of reindeer, which they milk to make cheese and other foods.

“I’m in this place where animals are part of everyone’s day-to-day life, and I feel this connection with my own family history,” Taylor said.

He also recognized how tenuous that livelihood was. In the last two decades, temperatures in Mongolia have risen more than 2.5 degrees Fahrenheit above the 20th Century average. That rapid warming could spell trouble for the region’s munkh mus.

Reindeer are cold-loving animals and can overheat when the weather gets too warm, Taylor explained. To compensate, the Tsaatan bring their herds to the ice to give them a break from the heat and the tundra’s abundant insects. 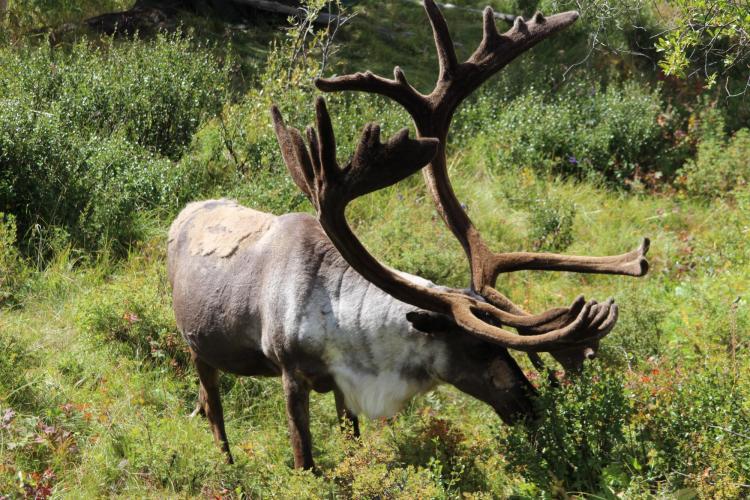 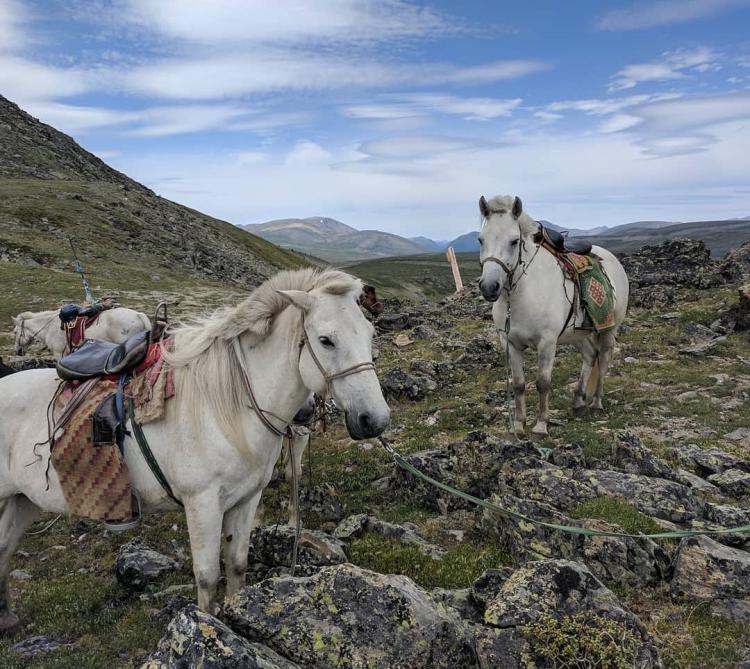 Top: A reindeer shows off its antlers; Bottom: Taylor and his colleagues conducted their ice survey on horseback. (Credits: O. Batchuluun; William Taylor)

The archaeologist and his colleagues wanted to better understand how climate change might threaten that existence.

In 2018, the team hopped onto horses and traveled across the Mongolian tundra to interview Tsaatan herders from eight different families. They all shared the same message: Many of these ice patches weren’t just melting but completely disappearing at the height of summer—the first time that had happened in as long as anyone could remember. Veterinarians on the research team reported that this melt could soon pose serious health risks to the herds of reindeer.

“The Tsaatan are literally at the front lines of climate change,” Taylor said. “These are folks that contributed nothing to the problem that we find ourselves in globally, but they’re the ones paying the first price.”

He’s quick to point out that it’s not just Mongolia’s modern history that’s at risk. The researchers also conducted an archaeological survey of 11 melting ice patches.

In the process, they unearthed several artifacts, including two carved branches that may have once been part of a fishing pole. Similar discoveries, the team reported, could vanish forever in the melting ice.

“Archaeology is non-renewable”, said Julia Clark, an archaeologist at Flinders University in Australia who led the project alongside Taylor. “Once the ice has melted and these artifacts are gone, we can never get them back.”

While the ultimate fate of the Tsaatan is still unclear, Taylor said that similar threats likely face other mountain communities around the world who depend on snowpack for water—something he has been keenly aware of since moving to Colorado.

“We’re sitting here in the Front Range of the Rocky Mountains,” he said, “and yet many of us probably haven’t thought all that much about how much global warming impacts mountain hydrology.”

Craig Lee, a research scientist at the Institute of Arctic and Alpine Research (INSTAAR) at CU Boulder also contributed to the new study. Other coauthors included researchers from the Humboldt University of Berlin; University of Arizona; National Museum of Mongolia; Clearview Animal Hospital; Mongolia’s State Central Veterinary Laboratory; and the University of New Mexico.

Through the Niwot Ridge Long Term Ecological Research Project, housed at CU Boulder's Mountain Research Station, scientists will continue to examine the impacts of a warming world on the university's highest campus. END_OF_DOCUMENT_TOKEN_TO_BE_REPLACED

Birds that can live at 14,000 feet and also breed at sea level might have evolved more quickly than previously thought. END_OF_DOCUMENT_TOKEN_TO_BE_REPLACED

Despite the Inflation Reduction Act, U.S. progress on climate change remains stuck in a climate conundrum, CU Boulder experts say, hampered by politics, complexity and the scope of the problem. END_OF_DOCUMENT_TOKEN_TO_BE_REPLACED
Return to the top of the page