Artificial gravity has long been the stuff of science fiction. Picture the wheel-shaped ships from films like 2001: A Space Odyssey and The Martian, imaginary craft that generate their own gravity by spinning around in space.

Now, a team from CU Boulder is working to make those out-there technologies a reality.

The researchers, led by aerospace engineer Torin Clark, can’t mimic those Hollywood creations—yet. But they are imagining new ways to design revolving systems that might fit within a room of future space stations and even moon bases. Astronauts could crawl into these rooms for just a few hours a day to get their daily doses of gravity. Think spa treatments, but for the effects of weightlessness.

The group hopes that its work will one day help keep astronauts healthy as they venture into space, allowing humans to travel farther from Earth than ever before and stay away longer.

But first, Clark’s team will need to solve a problem that has plagued proponents of artificial gravity for years: motion sickness.

“Astronauts experience bone loss, muscle loss, cardiovascular deconditioning and more in space. Today, there are a series of piecemeal countermeasures to overcome these issues,” said Clark, an assistant professor in the Ann and H.J. Smead Department of Aerospace Engineering Sciences. “But artificial gravity is great because it can overcome all of them at once.”

Clark tests it out himself in a room on campus not much bigger than an ordinary office.

The engineer lies down on a metal platform that looks like a hospital gurney, part of a machine that engineers call a short-radius centrifuge. After a quick countdown, the platform begins to rotate around the room, first slowly and then faster and faster.

Nicholas Dembiczak, an undergraduate student studying aerospace engineering and research assistant in the lab, watches Clark’s progress from a computer monitor in the room next door. 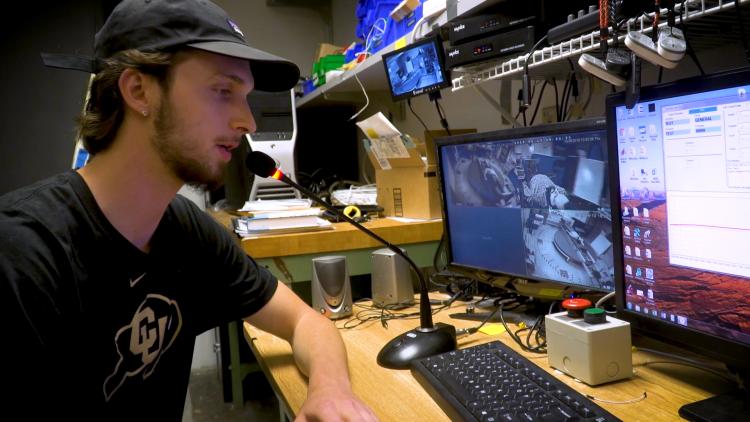 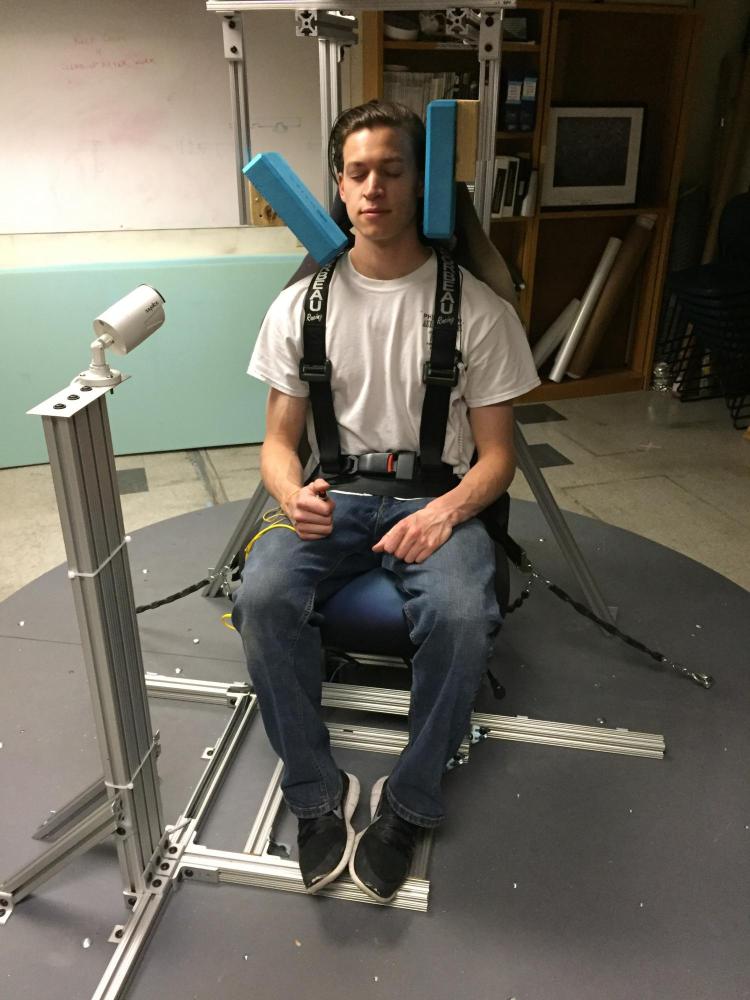 Top: Undergraduate Nicholas Dembiczak monitors Torin Clark's progress; bottom: In their experiments, Clark and his colleagues spun test subjects in a seated position, then asked them to tilt their head to the side to see if they experienced the cross-coupled illusion. (Credits: CU Boulder; Torin Clark)

“You’re coming on 15 rotations per minute now,” he announces over a microphone.

It’s also the closest that scientists on Earth can get to how artificial gravity in space might work.

Clark explained that the angular velocity generated by the centrifuge pushes his feet toward the base of the platform—almost as if he was standing under his own weight.

But there’s a problem with this kind of gravity, one that’s familiar to anyone who has visited an amusement park. If Clark turned his head to either side while spinning, he would experience a sensation known as the “cross-coupled illusion”—a disruption of the inner ear that makes you feel like you’re tumbling.

So strange that, for decades, engineers considered that kind of motion sickness a deal-breaker for artificial gravity.

Clark and Bretl, however, had other ideas.

In a series of recent studies, the pair and their colleagues set out to investigate whether queasiness is really the price of admission for artificial gravity. In other words, could astronauts train their bodies to tolerate the strain that comes from being spun around in circles like hamsters in a wheel?

The team began by recruiting a group of volunteers and tested them on the centrifuge across 10 sessions.

But unlike most earlier studies, the CU Boulder researchers took things slow. They first spun their subjects at just one rotation per minute, and only increased the speed once each recruit was no longer experiencing the cross-coupled illusion.

“I present at a conference and everyone says, ‘she’s the one who spins people and makes them sick,’” Bretl said. “But we try to avoid instances of motion sickness because the whole point of our research is to make it tolerable.”

The personalized approach worked. By the end of 10th session, the study subjects were all spinning comfortably, without feeling any illusion, at an average speed of about 17 rotations per minute. That’s much faster than any previous research had been able to achieve. The group reported its results in June in the Journal of Vestibular Research.

Clark says that the study makes a strong case that artificial gravity could be a realistic option for the future of space travel.

“As far as we can tell, essentially anyone can adapt to this stimulus,” he said.

In ongoing research, the researchers also bumped up the number of training sessions to 50, finding that people could spin even faster with more time.

But they also have a lot more questions to answer before you might see an artificial gravity room perched on top of the International Space Station: How long do the effects of training last, for example, and how much gravity would an astronaut need to offset the loss of muscle and bone?

Bretl, however, hopes that the research will begin to convince scientists that artificial gravity isn’t just for summer blockbusters.

“The point of our work is to try to get more people to think that maybe artificial gravity isn’t so crazy,” she said. “Maybe it has a place outside of science fiction."

A first-of-its-kind sensor, developed by a team at the Laboratory for Atmospheric and Space Physics, will measure sunlight reflecting from Earth with more accuracy than any instrument in space or on the ground. END_OF_DOCUMENT_TOKEN_TO_BE_REPLACED

Ahead of the historic space mission, crew members joined CU Boulder researchers Allie Anderson and Torin Clark to talk about how the eye changes in space, experiencing "space motion sickness" and more. END_OF_DOCUMENT_TOKEN_TO_BE_REPLACED

NASA’s Orion spacecraft blasted off this morning from Florida in the first stage of its 25-day journey to circle the moon and return to Earth. Two CU Boulder scientists talk about what lies in store for the space agency’s ambitious Artemis Program. END_OF_DOCUMENT_TOKEN_TO_BE_REPLACED
Return to the top of the page