An infrared close up of the moon

A first-of-its-kind camera developed in partnership between CU Boulder and Ball Aerospace will soon be landing on the moon.

The camera will ride along with one of three robotic landers that will touch down on the lunar surface in the next several years—a key step in NASA’s goal of sending people back to the moon by 2024. Planetary scientist Paul Hayne, who is leading the development of the instrument, said that the goal is to collect better maps of the lunar surface to understand how it formed and its geologic history. L-CIRiS will use infrared technology to map the temperatures of the shadows and boulders that dot the lunar surface in greater detail than any images to date.

And, Hayne added, the team believes that similar cameras could hitch a ride on many more future moon missions.

“In L-CIRiS, we have designed a cutting-edge instrument in a very small package,” said Hayne, an assistant professor at CU Boulder’s Laboratory for Atmospheric and Space Physics (LASP). “We can envision including an infrared camera based on L-CIRiS on nearly every lunar mission going forward, for both science and reconnaissance.” 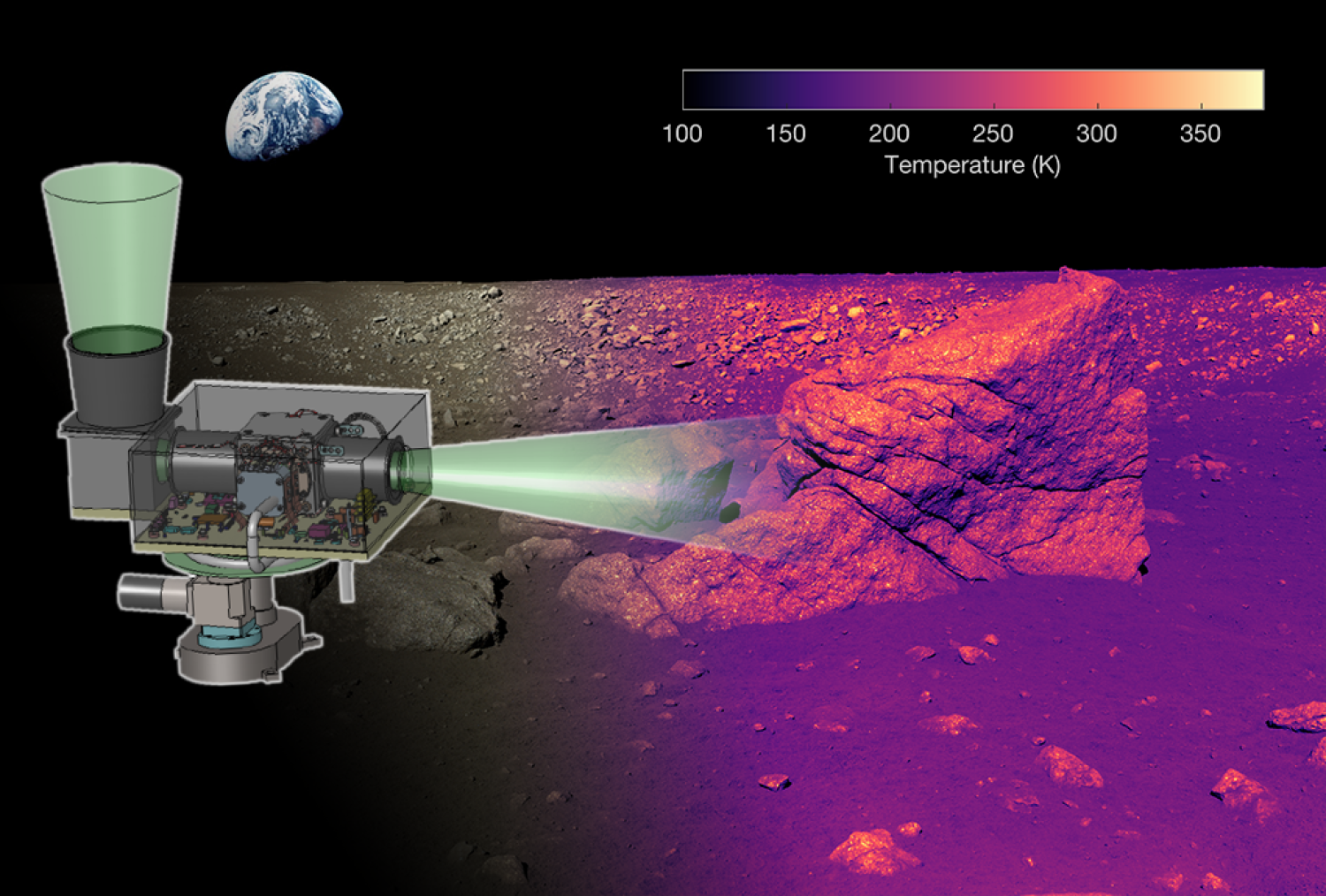 A simulation of the level of detail that L-CIRiS's infrared camera will reveal of the moon's surface. (Credit: Ball Aerospace)

“Collecting better data on the surface of the moon will be crucial step in understanding not just how this body evolved but also in paving the way for the return of American astronauts,” said Daniel Baker, director of LASP. “This project highlights how scientists at LASP are partnering with top engineers and industry partners to lead the way for the next generation of human space exploration.”

CU Boulder's Jack Burns, of the Department of Astrophysical and Planetary Sciences (APS), is also taking part in a second mission that NASA similarly picked to land on the moon: The Lunar Surface Electromagnetics Experiment (LuSEE), led by the University of California, Berkeley.

The commercial lander program is a critical component of that next wave of lunar voyages. In May, NASA picked three companies—Astrobotic, Intuitive Machines and Orbit Beyond—to send robotic spacecraft to the moon as early as 2020.

Those missions will, in part, test out possible landing sites for human missions in the following years, from craters on the near side of the moon to possible ice deposits near the lunar poles.

Hayne isn’t sure where on the moon L-CIRiS will be heading to yet. But the instrument will pack a big punch once it arrives.

That’s because the infrared camera will sit directly on top of one of the commercial landers and will scan the area around where it comes down, beginning a few feet away from the lander and extending to the horizon. The images will enable scientists to determine what the materials at the landing site are made of and how dense they are.

Such detailed images can also help to keep astronauts safe as they land their own spacecraft at similar sites.

“Data from L-CIRiS will help plan future lander, rover and astronaut missions by identifying hazardous rocks and determining the density of the lunar soil,” said Hayne, also of APS.

And it could map out what is, perhaps, the moon’s most valuable resource: water.

Scientists know that ice exists on the moon’s surface, usually in the shadows cast by craters near the poles. But they’re not sure what conditions are most conducive to forming this lunar ice. L-CIRiS’s data may help researchers to develop a more complete picture of how and where water collects on the moon.

Hayne says that he’s also thrilled to see his work become a small piece of what he hopes will be a renewed national excitement for exploring space.

“I think going back to the moon and building a permanent presence there will inspire people,” Hayne said. “I think it will lead to a lot of little girls and boys pursuing careers in science.”

CU's Laboratory for Atmospheric and Space Physics will contribute scientific data systems and mission operations expertise to a NASA robotic mission to study the lunar surface prior to renewed human exploration. END_OF_DOCUMENT_TOKEN_TO_BE_REPLACED

Disks made up of rocks and dust swirl around stars across the galaxy. These features are the "fossil record of planet formation," said astrophysicist Meredith MacGregor. END_OF_DOCUMENT_TOKEN_TO_BE_REPLACED

New research adds another piece of evidence to the scientist philosophy known as the mediocrity principle: Galaxies are, on average, at rest with respect to the early universe. Jeremy Darling, a CU Boulder astrophysics professor, recently published this new finding in the journal Astrophysical Journal Letters. END_OF_DOCUMENT_TOKEN_TO_BE_REPLACED
Return to the top of the page