Three different images of Ultimate Thule, which is reddish in color, as captured by the New Horizons spacecraft on Jan. 1 from about 85,000 miles away. (Credit: NASA/Johns Hopkins University Applied Physics Laboratory/Southwest Research Institute)

Researchers at CU Boulder spent the first hours of 2019 in a Maryland operations center watching NASA’s New Horizons spacecraft shoot past a minor planet more than 4 billion miles from Earth—the farthest object that any spacecraft has ever explored.

That icy object, an elongated body about 19 miles tall, is called 2014 MU69 or Ultima Thule, a Latin phrase that means “beyond the known world.”

CU Boulder scientists are playing an important role in this brush with the unknown, which took place on Jan. 1. As New Horizons zips through the outermost regions of our solar system, it will collect and analyze specks of dust using an instrument designed by students at the university.

That’s important because even distant phenomena can tell scientists a lot about how the inner solar system formed, said Fran Bagenal, a co-investigator on the New Horizons mission. 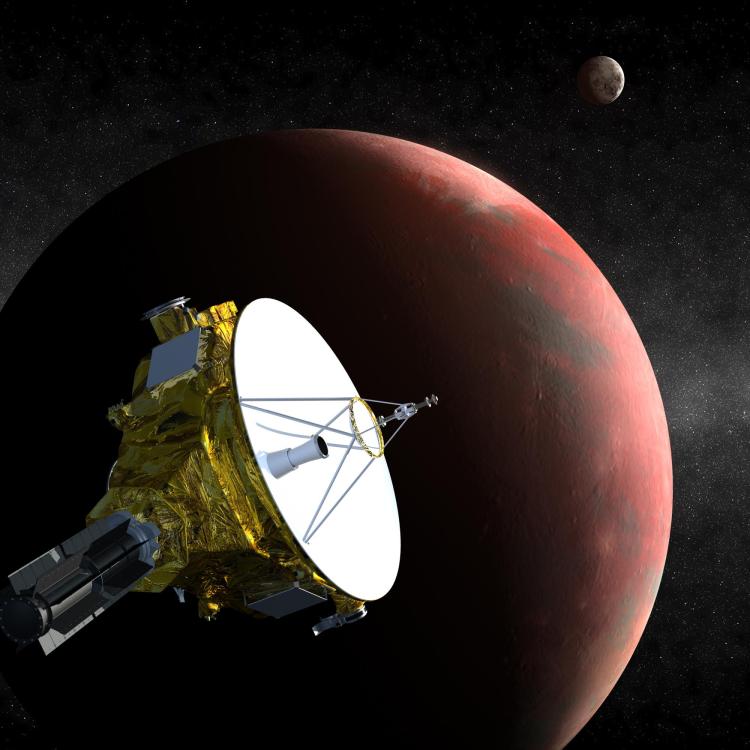 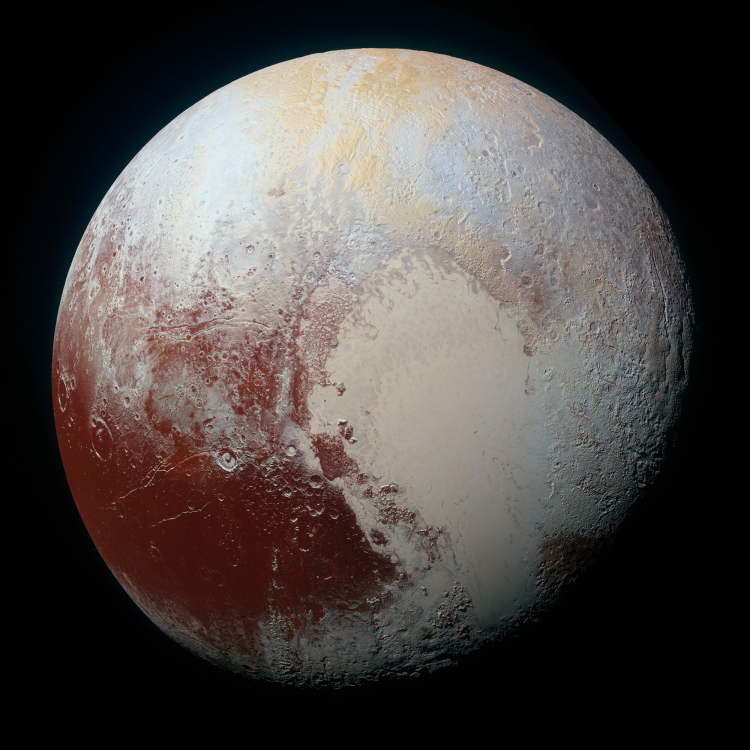 Top: An artist's depiction of New Horizons flying past Pluto and its moon Charon. Bottom: An image of Pluto assembled from New Horizons data and showing the heart-shaped feature on the surface of the dwarf planet. (Credits: NASA/Johns Hopkins University Applied Physics Laboratory/Southwest Research Institute)

“A lot of the water that we’re made of could come from Uranus and Neptune moving out during the late stages in the formation of our solar system and kicking objects in toward Earth,” said Bagenal, a professor in CU Boulder’s Laboratory for Atmospheric and Space Physics (LASP). “We have a terrestrial interest in thinking about what these icy bodies mean for us.”

The flyby is the latest in a series of firsts for New Horizons, which gained fame in 2015 for swooping past the dwarf planet Pluto.

As the spacecraft charged past Ultima Thule at about 32,000 miles per hour, one of the biggest questions facing the mission team was also among the simplest: What is it shaped like? Geometric information, Bagenal explained, might carry a lot of clues about how Ultima Thule originally formed.

“What kind of vegetable does it look like?” said Bagenal, who leads the mission’s plasma and particle science teams. “We want to know how this object has evolved and changed over time. Did it form where it is now, or did it form farther out and come inward?”

The answer, according to the first high-definition images of Ultima Thule sent back to Earth, doesn’t seem to be a vegetable at all. The icy body looks more like a peanut or a snowman and was formed by two separate spheres that became stuck together sometime in the past.

Bagenal and other CU Boulder researchers are just as excited about what lies past that snowman, too. As New Horizons reaches the edges of the Kuiper Belt, a region of space that is rich in icy bodies, it will collect critical data about how Earth’s solar system interacts with the galaxy outside.

One way it will do that is through dust, said Mihály Horányi of LASP who leads scientific research using the spacecraft’s Student Dust Counter.

The instrument gets its name because it was designed and built by undergraduate and graduate students at CU Boulder in the early 2000s as part of a NASA educational program. The device, which is about the size of a cake pan, detects the small particles that stream past New Horizons, recording their masses.

The instrument has detected thousands of such particles in its voyage to Pluto and beyond. And Horányi is curious to see how far those streams of dust extend.

Horányi added that the success of the University of Colorado’s Student Dust Counter has paved the way for CU Boulder to build more complex dust-detecting instruments on upcoming space missions. They include Europa Clipper and the Interstellar Mapping and Acceleration Probe (IMAP).

“We know that dust carries so much information—as they are the little building blocks of our solar system,” said Horányi, also a professor in the Department of Physics. “It’s one of the highlights of my entire career that we put something on this spacecraft that is performing so well and makes great scientific contributions.”

For her part, Bagenal was just excited to be in the room as the first images come streaming in from Ultima Thule. “This flyby is going to be more about enjoying the exploration and curiosity for its own sake,” she said.

A first-of-its-kind sensor, developed by a team at the Laboratory for Atmospheric and Space Physics, will measure sunlight reflecting from Earth with more accuracy than any instrument in space or on the ground. END_OF_DOCUMENT_TOKEN_TO_BE_REPLACED

Ahead of the historic space mission, crew members joined CU Boulder researchers Allie Anderson and Torin Clark to talk about how the eye changes in space, experiencing "space motion sickness" and more. END_OF_DOCUMENT_TOKEN_TO_BE_REPLACED

NASA’s Orion spacecraft blasted off this morning from Florida in the first stage of its 25-day journey to circle the moon and return to Earth. Two CU Boulder scientists talk about what lies in store for the space agency’s ambitious Artemis Program. END_OF_DOCUMENT_TOKEN_TO_BE_REPLACED
Return to the top of the page