The heliosphere (in gray) acts as a protective shield that blocks galactic "winds" from entering our solar system. (Credit: NASA/Goddard/Walt Feimer)

Researchers at CU Boulder will soon set their sights on the heliosphere, a massive bubble in space that surrounds our solar system and shields it from incoming radiation.

NASA’s recently announced Interstellar Mapping and Acceleration Probe (IMAP) mission, which is slated to launch in 2024, will hover close to one million miles from Earth where it will observe the outermost edges of the solar system—the limits of our sun’s influence on space.

CU Boulder’s Laboratory for Atmospheric and Space Physics (LASP) will play a major role in the nearly $500 million mission by leading IMAP’s scientific operations and designing an instrument that will fly on the spacecraft, detecting tiny particles of dust that flow through space.

Daniel Baker, director of LASP, said that the mission will provide new perspective on “our home in space.”

“This is a wonderful demonstration of how LASP brings together solar science, planetary science, astrophysics and research on space weather,” he said. 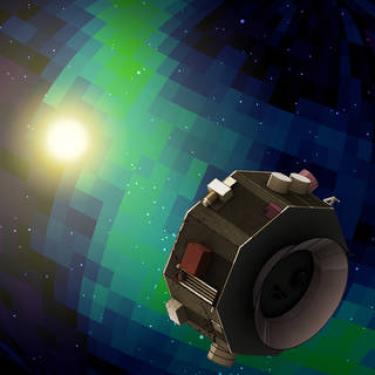 It’s a diverse approach to a dynamic neighborhood. Baker explained that the sun continuously blasts out gusts of charged particles, known as solar winds. Like blowing a bubble gum bubble, these bursts expand through the solar system until they crash into similar winds moving in the other direction—in this case, from interstellar space. That crashing point marks the border of the heliosphere.

“We on Earth are awash between two gigantic forces,” Baker said. “One is the constant flow of energy from the sun. The other is the bombardment from the galaxy beyond. We’re caught in the crossfire.”

IMAP will explore this crossfire and, in particular, the charged particles and debris that manage to slip past that border in space. But the mission will look inward as well as outward, Baker said. As IMAP monitors the heliosphere, the satellite will also point a telescope back at Earth to record how solar winds smash into the planet’s magnetic field, potentially disrupting satellites and ground-based electronics.

“IMAP will be in an ideal position to send real-time data to Earth to continue monitoring the energetic particles coming from the sun that can hit the Earth and cause significant space weather issues,” Baker said.

To support the mission, LASP will operate IMAP’s suite of 10 instruments, collecting the data they send back to Earth and disseminating that information to researchers worldwide. The institute has overseen similar operations for a number of NASA missions, including the Magnetospheric Multiscale (MMS) and Mars Atmosphere and Volatile Evolution (MAVEN) missions. Johns Hopkins University will manage the overall IMAP mission.

This satellite will also give scientists at CU Boulder the chance to peer at some of the galaxy’s smallest interstellar travelers: space dust particles. Mihály Horányi, a professor in the Depatment of Physics, explained that researchers can learn a lot by studying the tiny particles that wash into our solar system from the Milky Way Galaxy. Similar specks of dust, for example, helped to seed all of the planets that now orbit the sun.

“Everything that your body is made up of, and everything in the solar system, came from gas and dust,” said Horányi, who is also a research associate at LASP. “We’re interested in how that dust was processed and how it continues to enter the solar system. The interstellar dust particles also play a critical role in shaping the composition of the atoms and ions of the inflowing interstellar gas.”

To probe these questions, his team will install a dust detector a little bigger than a basketball hoop on IMAP. Called the Interstellar Dust Experiment (IDEX), the instrument will catch bits of matter that stream by the satellite, analyzing the atoms that make them up. And, Horányi said, the instrument can also record how fast those particles are moving and in what direction.

That data will allow the researchers to distinguish between dust that originated in our solar system—such as from comets or from two asteroids smashing together—and dust that came from farther away.

In other words, dust can provide the IMAP team with another window into how our solar system interacts and swaps material with the galaxy at large.

“Dust provides a different way to look at the universe,” Horányi said. “You can look with telescopes, or detect electrons, ions or neutral atoms, but you can also use bigger chunks of solid matter to learn about our galactic neighborhood.”

A new NASA report shows that the University of Colorado Boulder is the top university recipient of NASA astrophysics technology grants. END_OF_DOCUMENT_TOKEN_TO_BE_REPLACED

CU Boulder has been selected as a member of the United States Space Command Academic Engagement Enterprise, a new national program designed to expand collaboration and academic exchanges between universities and Space Command. END_OF_DOCUMENT_TOKEN_TO_BE_REPLACED

Since July 2022, a miniature satellite about the size of a shoebox has been orbiting Earth and monitoring how much solar energy reaches the atmosphere, one of the "most important" Earth science measurements. Now, scientists are finalizing their analysis of the first five months of the testing. END_OF_DOCUMENT_TOKEN_TO_BE_REPLACED
Return to the top of the page