The scene could be torn straight from the latest Ocean’s heist film: Inside CU Boulder’s ATLAS Institute, three undergraduate students clamp the metal frame of their robot onto a home safe. The robot, which looks a bit like an old Erector Set, whirs to life, using a spinning wheel to turn the dial on the lockbox. It whirls through a series of possible combinations.

If seniors Andrea DeVore, Kendle McDowell and Kenzy O’Neill have done their work right, the safe should pop open in a matter of minutes. Now, all they have to do is wait.

It may seem strange that university students are working to bust into a safe—and for academic credit, no less. But DeVore, McDowell and O’Neill are taking part in a new course, called Safecracking, that teaches budding engineers how to do just that.

The class isn’t encouraging thievery, explained instructors Alicia Gibb and Nathan Seidle. Instead, they’re challenging their students to stretch their engineering and design skills to solve a real-world problem in an environment that lets them feel like secret agents for the semester.

“It’s really piquing their intrinsic motivation to learn,” said Gibb, who founded and directs ATLAS’ appropriately-named Blow Things Up Lab. “That way, we can teach them all about power management, motor controls and mechanical features, all in one class.”

The approach has captured the imagination of Joe Ryan, a senior in the Technology, Arts and Media (TAM) Program. “It felt like an accumulation of everything we’ve learned in the program so far with a really cool point of view, because cracking safes is cool,” he said.

It’s also not easy. Seidle is a CU Boulder alum who founded SparkFun Electronics, a Colorado-based company that produces open source electronic components and other tools. He was inspired to design his own safecracking robot last year when Gibb, his wife and co-instructor, bought him a used lockbox off of Craigslist for $20.

“I got a safe with no combination for Christmas,” Seidle said. “I love puzzles.”

To solve that particular puzzle, he took advantage of a few quirks in the way that many combination dial safes are manufactured. By exploiting those design flaws, he was able to narrow down the list of possible combinations that might unlock his safe—developing a robot that could churn through the three-number codes in 45 minutes or less. 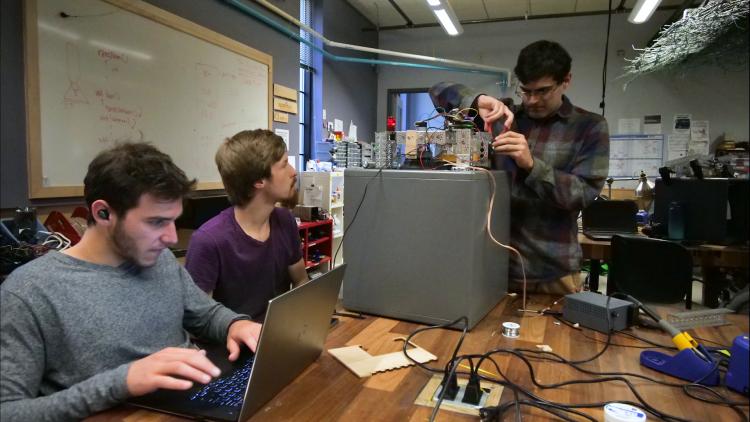 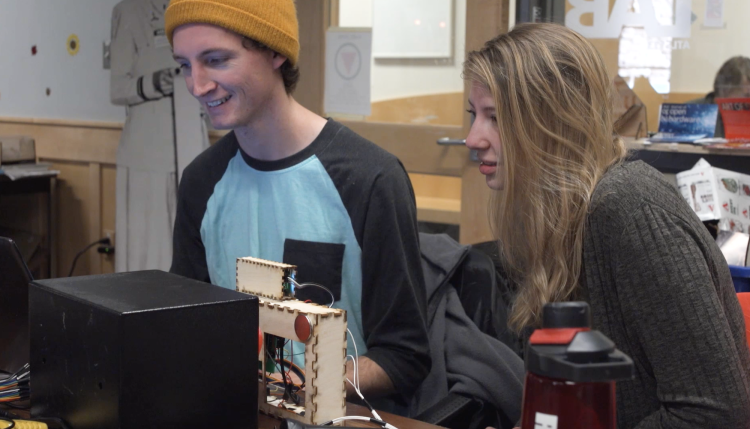 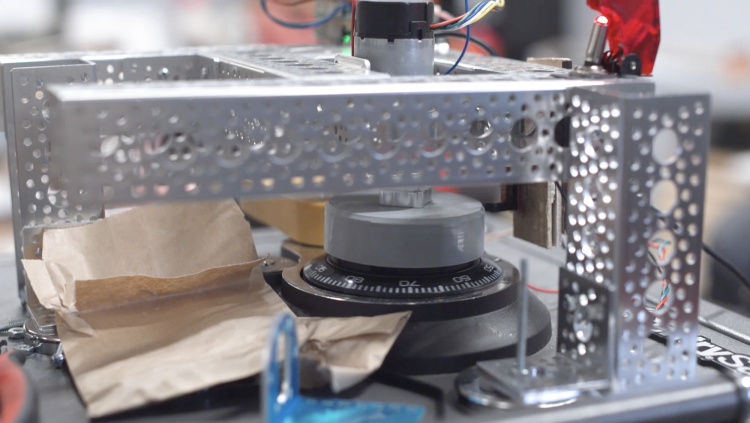 Top: From left to right, Joss Gitlin, Andrew Shepherd and Julian Torres troubleshoot their safecracking robot; middle: Joe Ryan and Laney Winkler work to open up a safe that unlocks using a numerical keypad instead of a dial; bottom: a robot spins the dial on a combination lock safe. (Credits: Mason Marino/CU Boulder)

Seidle’s students are taking a similar approach to their safes, but they’ve also made the project their own, he said.

One team, for example, modified a vintage suitcase to house their robot, turning a relatively ugly contraption into a retro spy tool. Another team opted to crack open a safe that unlocks using a numerical keypad instead of a rotary dial, a more difficult feat of engineering.

“There’s been a couple instances in this class that I really enjoyed when the student says, ‘oh, that’s what they were talking about,’” Seidle said. “It’s that moment where they learned something in another class, and they didn’t know why. And, suddenly, it applies or clicks.”

“I had no idea how a standard combination lock worked,” said Laney Winkler, also a senior in the TAM Program. “There are so many things we take for granted, and we don’t know how they work. But when you actually hack into them you can see how things move.”

Gibb wants her students to learn more than just how machines move. She also hopes that they will leave the class with a grounding in the ethics of “white hat” hacking. That’s the term for when computer programmers and engineers take apart secure systems not to steal anything, but to design products that work better.

To that end, the group has discussed the cases of famous hackers like Edward Snowden and Aaron Swartz. And they’ve brushed up on Colorado’s legal statutes for owning lockpicks.

When it comes to hacking, “a lot of times that word gets hijacked to say that it’s only for evil,” Gibb said. “We’re trying to take the term back.”

It’s a goal that DeVore, McDowell and O’Neill are closing in on now. They cracked their safe using their robot for the first time a few days ago. “I think we spent 10 minutes just walking around the room” and celebrating, McDowell said.

Since then, Gibb and Seidle have changed the safe’s combination, making this next attempt a bit trickier. After a suspenseful wait, the safe clicks, and the students toss open the door. Inside, they find a custom-made circuit board and three laminated one-dollar bills—the reward from their teachers for pulling off the perfect score.

The Living Materials Laboratory is scaling up the manufacture of carbon-neutral cement as well as cement products, which can slowly pull carbon dioxide out of the atmosphere and store it. END_OF_DOCUMENT_TOKEN_TO_BE_REPLACED

Qubits, the basic building blocks of quantum computers, are as fragile as snowflakes. Now, researchers have come up with a new way of reading out the information from certain kinds of qubits with a light touch, potentially paving the way for a quantum internet. END_OF_DOCUMENT_TOKEN_TO_BE_REPLACED

New results from real-world tests of a downwind turbine could inform and improve the wind energy industry in a world with intensifying hurricanes and a greater demand for renewable energy. END_OF_DOCUMENT_TOKEN_TO_BE_REPLACED
Return to the top of the page