Harrison "Jack" Schmitt, a former NASA astronaut, points to a photograph of reddish-orange lunar soil that he took during his trip to the moon in 1972. (Credit: Casey Cass/CU Boulder) 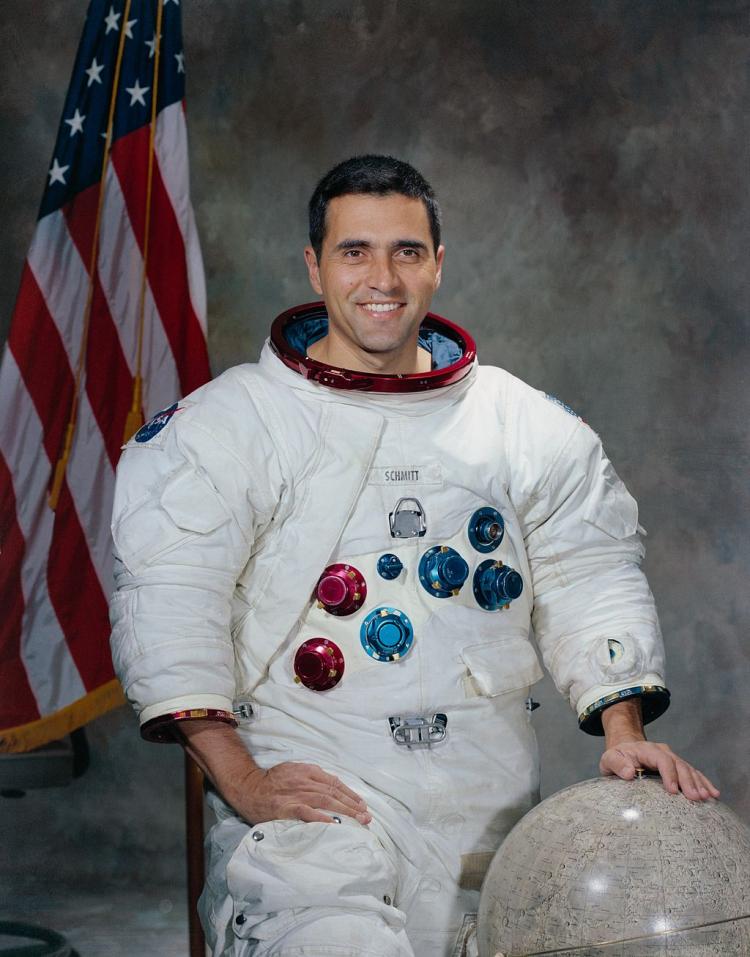 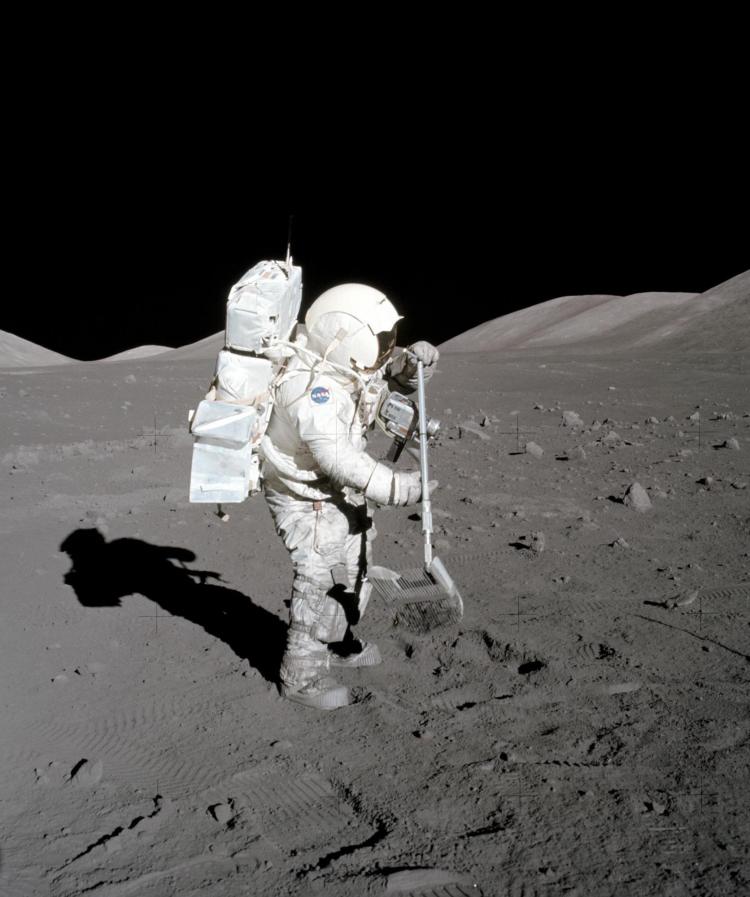 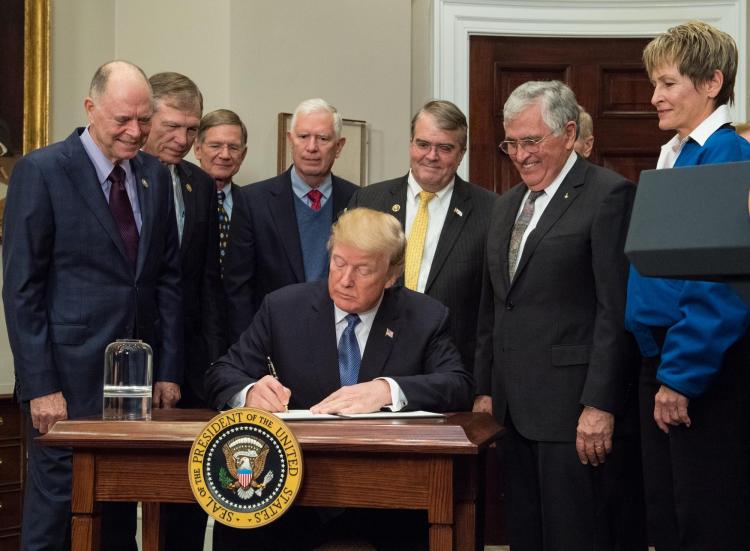 Harrison “Jack” Schmitt, an Apollo-era astronaut and the last person to set foot on the moon, recently gave a group of CU Boulder students the chance to see something rare: color on the lunar surface.

Schmitt, who flew on Apollo 17 in 1972, visited the university Monday. He spoke to an undergraduate class focusing on space science and policy and later delivered a public talk at the Fiske Planetarium. You can watch the live stream of Schmitt's talk online.

The glimpse of color came from a photograph that had been recreated from negatives that Schmitt snapped during his 3-day trek on the lunar surface. It showed a reddish-orange streak of lunar soil that Schmitt, a Harvard-trained geologist, explained was made up of tiny glass beads created during a 3.5 billion-year-old volcanic eruption.

“I just thought you’d like to see color on the moon,” Schmitt told the roughly two-dozen students in the class.

The former astronaut, now 83, used the opportunity to encourage CU Boulder students to take part in the future of NASA—and in the agency’s renewed drive to explore Earth’s only satellite.

“What do people like you bring?” Schmitt said. “You bring imagination. You bring stamina, and you haven’t learned how to fail yet.”

The students jumped at the chance to hear from an Apollo astronaut. Amanda Alexander studies astronomy and geology and works in a lab at CU Boulder that examines Martian regolith, the loose material that sits on the surface of parts of Earth and other planets. She asked Schmitt what the moon’s dusty ground felt like under his boots. His answer: “It’s like damp beach sand.”

“It’s just invaluable insight [from] somebody who’s been on another world,” Alexander said. “To actually ask about that experience, especially the regolith which I asked about, was amazing.”

The future of space travel

Schmitt was invited to CU Boulder by Jack Burns, a professor in the Department of Astrophysical and Planetary Sciences who teaches the space science course.

The astronaut, Burns said, offered a unique perspective on the future of space travel in the United States. Schmitt, who earned a Ph.D. in geology in 1964, is the only scientist to visit the moon. He also served as a U.S. senator for New Mexico from 1976-1982 and is still active in advising space policy today. He was present in 2017 when President Trump signed a directive instructing NASA to return to the moon.

“Dr. Schmitt brought a unique perspective on space exploration and space science to our students as the last man to have stepped on the moon 46 years ago,” said Burns, also the Vice President Emeritus for Academic Affairs and Research for the CU System. “As we look forward to new missions to the lunar surface, as NASA has been directed to do by the president, Dr. Schmitt brought us lessons learned from Apollo and also how today’s advanced technologies will make the moon more accessible.”

Schmitt spoke to Burns’ class about the importance of securing stable funding for NASA and said that the agency needs to recruit talented people who aren’t afraid to take risks.

“The agency has to get young again,” Schmitt said.

CU Boulder has played a critical role in ongoing efforts to conduct research on and around the moon. Scientists at the Laboratory for Atmospheric and Space Physics (LASP), for example, led research using a NASA satellite that discovered that the moon is surrounded by an ever-present cloud of dust.

NASA also recently gave funding to Burns and his colleagues to design a small satellite that would circle the moon to peer at an age of the universe before the first stars formed.

Later in the day, Schmitt spoke to a packed house at the Fiske Planetarium, where he shared stories about the life of an Apollo astronaut. That included duct tape—“we had a nice big roll of it on the spacecraft,” Schmitt said—and the food that astronauts wouldn’t touch, like salmon salad.

Near the end of his talk, Schmitt showed the audience a photo, taken using a remote camera, of Apollo 17’s lander blasting off from the moon. Schmitt said that the mission’s commander, Eugene Cernan, had joked with him, asking why he hadn’t gotten out to take a better photo of the liftoff.

“Someday, some of you maybe in this room are going to be up there,” Schmitt told the audience at Fiske. “And you really will get a really good picture of liftoff.” 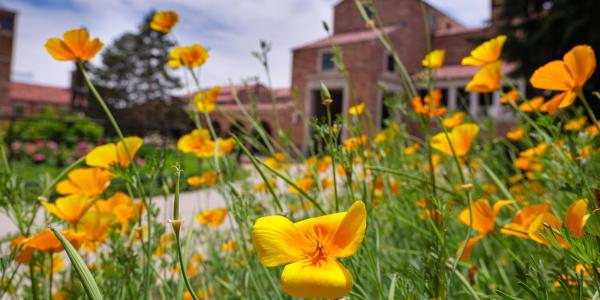 To reflect the university’s holistic approach to campus needs, CU Boulder’s Health and Wellness Services unit is moving from Student Affairs to Strategic Resources and Support. Also, the Faculty and Staff Assistance program, currently in Human Resources, will become part of HWS. END_OF_DOCUMENT_TOKEN_TO_BE_REPLACED

With the goal of enhancing operations within core and shared instrumentation facilities on campus, the Core Facility Assistance Grant Program has awarded 10 new awards. Additionally, the Core Facility Voucher Program has doled out awards to assist faculty in gathering new or additional data for grant applications. END_OF_DOCUMENT_TOKEN_TO_BE_REPLACED

Six life science scholars will embark on their PhD studies and contribute their unique cultural experiences to the CU Boulder campus this fall through a nearly $1.9 million gift to the university from the Shurl and Kay Curci Foundation. END_OF_DOCUMENT_TOKEN_TO_BE_REPLACED
Return to the top of the page