Artist's depiction of the Cassini spacecraft passing through plumes from Enceladus. (Credit: NASA/JPL-Caltech)

Very little was known about Enceladus prior to 2005—the year when Cassini first flew by. Since then, it has become a continuous source of surprises, with secrets still being revealed even now, after the mission end. 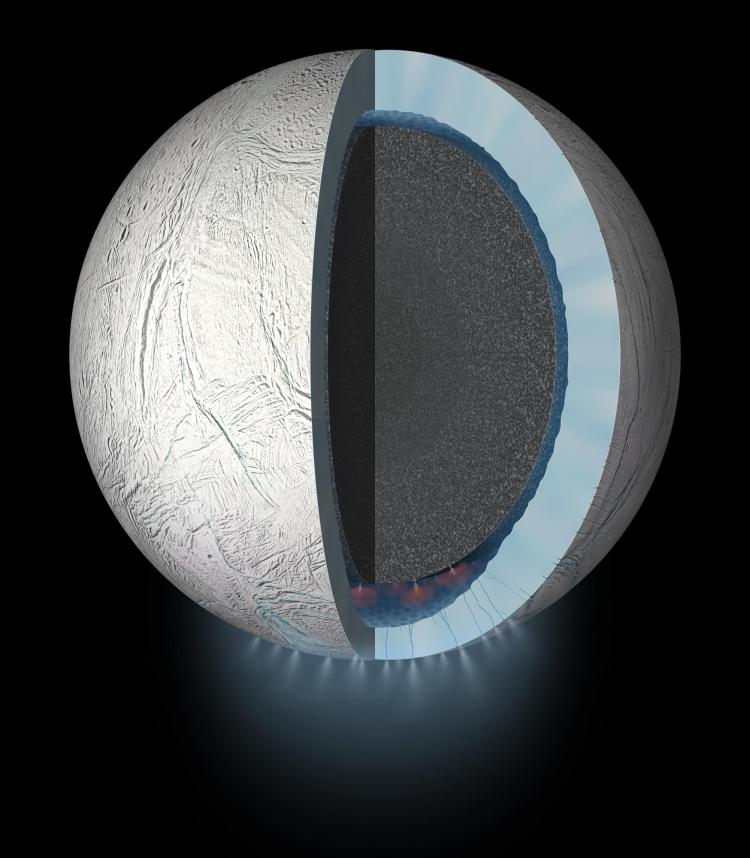 During the mission’s incredible career, scientists discovered that 500 kilometer-wide Enceladus has a massive sub-surface ocean hidden underneath a thick icy crust, with evidence pointing to powerful hydrothermal vents on the seabed that mix up material from the moon’s water-filled, porous core with the ocean water.

They detected mighty geysers releasing a mixture of water vapour and ice grains from the oceans into space through cracks—nicknamed "tiger stripes"—in the moon’s icy shell, providing material for one of Saturn’s rings.

Now, a team led by Frank Postberg and Nozair Khawaja of the University of Heidelberg, Germany, has identified fragments of large organic molecules in these ejected ice grains. The results are published today in Nature.

“It is the first ever detection of complex organics coming from an extraterrestrial water-world,” says Frank.

“We found large molecular fragments that show structures typical for very complex organic molecules,” adds Nozair. “The fragments, of up to 200 units of molecular mass, are created as the ice grains hit the scientific instruments on Cassini at speeds of about 30,000 kilometres per hour, but we believe that, prior to the collision, the grains contain the original, even larger molecules, which could have molecular weights of thousands of atomic mass units.”

Scientists calculate molecular mass, or weight, as the sum of weights of individual atoms contained in the molecule. Previously, Cassini had only detected lightweight organic molecules at Enceladus much smaller than the most recently found fragments.

Such large molecules can only be created by complex chemical processes—including those related to life. Alternatively, they could come from primordial material as found in some meteorites or, more likely, be generated by hydrothermal activity.

“In my opinion the fragments we found are of hydrothermal origin, having been processed inside the hydrothermally active core of Enceladus: in the high pressures and warm temperatures we expect there, it is possible that complex organic molecules can arise,” says Frank.

The observations in this study were made using the Cosmic Dust Analyzer on the Cassini spacecraft. LASP researchers have a long history of probing dust in space—students at the university designed a dust detector on the New Horizons spacecraft, which made a close pass of Pluto in 2015. Scientists at LASP are also developing an instrument called the SUrface Dust Mass Analyzer (SUDA) that will analyze dust around Jupiter’s moon Europa as part of NASA’s Europa Clipper mission.

“The detection of the tiniest amounts of large organic molecules in ice particles demonstrates the power of dust detectors such as SUDA, which is much more capable than the Cosmic Dust Analyzer," says Kempf.

Read the full story from the European Space Agency.

A first-of-its-kind sensor, developed by a team at the Laboratory for Atmospheric and Space Physics, will measure sunlight reflecting from Earth with more accuracy than any instrument in space or on the ground. END_OF_DOCUMENT_TOKEN_TO_BE_REPLACED

Ahead of the historic space mission, crew members joined CU Boulder researchers Allie Anderson and Torin Clark to talk about how the eye changes in space, experiencing "space motion sickness" and more. END_OF_DOCUMENT_TOKEN_TO_BE_REPLACED

NASA’s Orion spacecraft blasted off this morning from Florida in the first stage of its 25-day journey to circle the moon and return to Earth. Two CU Boulder scientists talk about what lies in store for the space agency’s ambitious Artemis Program. END_OF_DOCUMENT_TOKEN_TO_BE_REPLACED
Return to the top of the page