A University of Colorado at Boulder space dust counter designed, tested and operated by students that is flying aboard NASA's New Horizons mission to Pluto now holds the record for the most distant working dust detector ever to travel through space.

The instrument on the New Horizons mission -- officially named the Venetia Burney Student Dust Counter, or SDC, after an 11-year-old English girl who named Pluto more than 75 years ago -- reached a distance of 1.67 billion miles from Earth on Oct. 10. Designed by a student team from CU-Boulder's Laboratory for Atmospheric and Space Physics, SDC was launched in 2006 aboard the New Horizons spacecraft, which is now approaching the orbit of Uranus.

Dust grains in the solar system are of high interest to researchers because they are the building blocks of the solar system's planets. Scientists are particularly interested in dust that New Horizons is expected to encounter in the Kuiper Belt, a vast region beyond Neptune's orbit that contains thousands of icy objects that are thought to contain samples of ancient material formed in the solar system billions of years ago.

The only other dust-detecting instruments to measure space dust beyond the orbit of Jupiter -- which is inside the orbit of Uranus -- flew aboard NASA's Pioneer 10 and Pioneer 11 spacecraft in the 1970s.

"The New Horizons mission is going to break a lot of records, but this early one is one of the sweetest," said New Horizons Principal Investigator Alan Stern of the Southwest Research Institute in Boulder. "We're very proud to be collecting solar system dust data farther out than any mission ever has, and we're even prouder to be carrying the first student-built and student-operated science instrument ever sent on a planetary space mission," said Stern, a former faculty member at CU-Boulder.

"It's a once-in-a-lifetime experience to be part of the group of students who made this happen," said Andrew Poppe, a CU graduate student in physics who helps operate LASP's SDC and analyze the data. "We built a record-breaking, successful instrument that is taking scientific measurements to advance our understanding of the role of dust in our solar system."

Poppe said the data collected by SDC were in agreement with earlier dust measurements made by NASA's Galileo and Ulysses missions to Jupiter.

Poppe is one of five students on the current SDC team and one of 32 who have worked on the instrument since the CU-Boulder project began in 2002. The original team ofroughly 20 undergraduate and graduate students has evolved over time, with new students brought into the fold as the New Horizons mission has proceeded from concept development through launch and into its ongoing flight phase during the past two decades.

The SDC is a thin plastic film resting on a honeycombed aluminum structure the size of a cake pan mounted on the outside of the spacecraft. A small electronic box inside the spacecraft functions as the instrument's "brain" to assess each individual dust particle that strikes the detector. The microscopic-sized dust grains hitting the SDC create unique electrical signals, allowing the students to infer the mass of each particle.

"The SDC was built and tested to the same NASA engineering standards as professionally built flight instruments, under the supervision of professionals," said SDCinstrument principal investigator and LASP researcher Mihaly Horanyi. "Students participating in the SDC project have come from a variety of disciplines ranging from science and engineering to journalism and business, and many have graduated and gone on to careers in the space industry," he said.

"In addition to its significant contribution to science, SDC has proven to be an excellent investment in the scientists and engineers of tomorrow," said Horanyi, also a professor in CU-Boulder's physics department.

SDC will continue to return information to Earth on the dust that strikes its detectors during the spacecraft's approach to Pluto and beyond. "The improved observations that SDC will make available will advance our understanding of the origin and evolution of our own solar system, as well as help scientists studying planet formation in dust disks around other stars," said Horanyi.

Other major projects involving LASP students have included the Solar Mesosphere Explorer, or SME, satellite that was designed and built by students, faculty and staff. The student-controlled satellite, which flew from 1981 to 1989 and studied the processes that create and destroy ozone, was widely known as The Classroom in Space.

A second LASP satellite, the Student Nitric Oxide Experiment, or SNOE, was designed by students and faculty and staff to study variations of nitric oxide that affect Earth's ozone layer. It was launched in 1998 and flew until 2003. More than 100 CU-Boulder students helped with the instrument design, construction, maintenance, programming and operations. SME and SNOE were the first two NASA satellites ever operated by students. 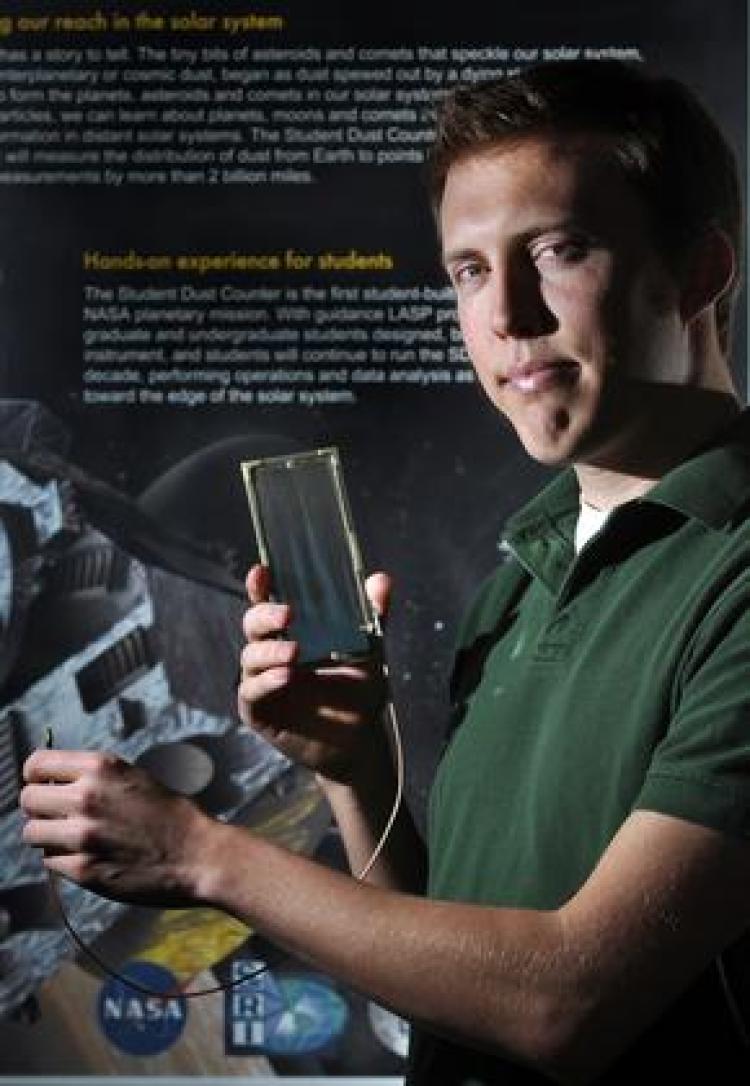 CU-Boulder graduate student Andrew Poppe of the physics department is part of a student team at the Laboratory for Atmospheric and Space Physics that designed and built the Student Dust Counter instrument now flying on NASA’s New Horizons spacecraft that is headed for Pluto. (Photo by Glenn Asakawa/ University of Colorado)

Awake too early when you should be asleep? Might want to try and switch things up. A new study by the University of Colorado shows that the longer people are awake during the time their biological clock is telling them to sleep the worse their sensitivity to insulin, which is a precursor to diabetes. END_OF_DOCUMENT_TOKEN_TO_BE_REPLACED

On Thursday, Oct. 29, at 4 p.m. in UMC 235, Institute of Arctic and Alpine Research Fellow and Professor of civil, environmental and architectural engineering Diane McKnight will present, “The McMurdo Dry Valleys, Antarctica: Ecosystems waiting for water” as part of the 2015 Distinguished Research Lecturer series. END_OF_DOCUMENT_TOKEN_TO_BE_REPLACED

SuviCa Inc. of Boulder, a University of Colorado Boulder biotech start-up company, has been awarded roughly $1.5 million in federal funding to develop novel treatments for head and neck cancer. END_OF_DOCUMENT_TOKEN_TO_BE_REPLACED
Return to the top of the page