At 6:51 p.m. on April 18, a rocket carrying NASA’s latest space satellite, called the Transiting Exoplanet Survey Satellite (TESS), blasted off from the Cape Canaveral Air Force Station in Florida. CU Boulder Assistant Professor Zach Berta-Thompson was on the ground for the launch. He called the experience “terrifying but incredible.”

Berta-Thompson of the Center for Astrophysics and Space Astronomy (CASA) is one of several researchers from CU Boulder who are contributing to the TESS mission. And he’s excited: Now in orbit around Earth, TESS will soon lead the search for planets outside of our solar system.

Scientists predict that TESS could locate thousands of these exoplanets by taking an almost 360-degree movie of the sky. But the value of the mission goes beyond just putting pins in a map, Berta-Thompson said. As TESS discovers new planets, astronomers will be able answer a range of questions about far-flung worlds: What makes up their atmospheres, and are they rocky like Earth or icy like Neptune?

“TESS will provide a catalogue that astronomers will be able to flip through for decades or centuries to come to study the properties of exoplanets,” Berta-Thompson said.

The mission is a successor to NASA’s Kepler spacecraft, which is operated by CU Boulder’s Laboratory for Atmospheric and Space Physics (LASP). During nearly 10 years in space, Kepler spotted more than 2,300 confirmed exoplanets but is now running low on fuel.

TESS, however, isn’t just a replacement for that older mission. The satellite is designed to find planets that are much closer to Earth than those that Kepler was able to see—100 light years or less from Earth’s sun, right next door in astronomical terms. And closer planets are easier for astronomers to observe, Berta-Thompson said: “TESS will find them, and then we’ll point every other big telescope we have at them.”

Berta-Thompson began working on TESS in 2013 when he was a postdoctoral researcher at the Massachusetts Institute of Technology (MIT), the institution leading the mission.

He has carried his work over to CU Boulder and is eager to learn more about exoplanet atmospheres. Are they rich in carbon dioxide like Venus or cloaked in hydrogen and helium like Uranus? In particular, he’s fascinated by a class of planets that scientists call “mini-Neptunes” or “super Earths.” As their names suggest, these planets are about 1.5 to three times the size of Earth and not represented in our own solar system. (Kepler located about 1,200 mini-Neptunes during its tenure, but most were too far away for scientists to explore in any detail.) 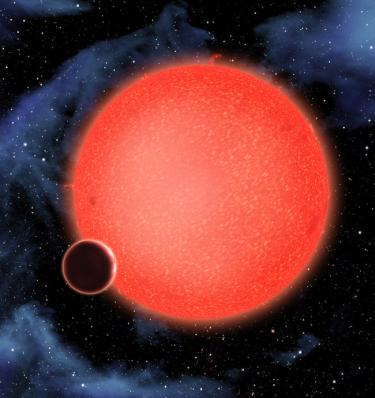 An artist's conception of a "mini-Neptune" first identified by the Kepler mission called GJ 1214b. This planet orbits a red dwarf star just 40 light years from Earth, but is so covered in clouds that scientists haven't been able to gather much information about its atmosphere. (Credit: NASA, ESA, D. Aguilar)

Berta-Thompson hopes that TESS will change that, unveiling hundreds more mini-Neptunes that will be close enough for him to really dig into. “Some of those are systems I know I’m going to spend the rest of my career studying,” he said.

Other CU Boulder scientists will contribute to the mission, too. Timothy Brown, a research associate at CASA and a co-investigator on the mission, is working to determine which signals from TESS are real planets and which are other astrophysical objects. Sebastian Pineda, a postdoctoral researcher at LASP, is one of the few scientists who will be using the satellite not to search for planets but study stars.

Pineda explained that TESS searches for exoplanets by monitoring the brightness of stars. When a planet circles in front of its sun, the light from that sun dims. Pineda will use TESS’s sensitivity to brightness to explore the behavior of small stars, including how often they flare and the dynamics of their atmospheres, including starspots.

“That’s one of the neat things about a mission like TESS,” he said. “While it has a primary mission, its data can be used for a variety of things.”

Berta-Thompson said that on top of all of the great science that TESS will make possible, he still got caught up in the excitement of going to Cape Canaveral.

“It’s really fun to see everybody in Florida excited about the launch,” he said before Wednesday’s lift off. “I think there are a lot of curious scientists and engineers who want to see what TESS is going to see. We’ve been waiting a long time for this.”

A first-of-its-kind sensor, developed by a team at the Laboratory for Atmospheric and Space Physics, will measure sunlight reflecting from Earth with more accuracy than any instrument in space or on the ground. END_OF_DOCUMENT_TOKEN_TO_BE_REPLACED

Ahead of the historic space mission, crew members joined CU Boulder researchers Allie Anderson and Torin Clark to talk about how the eye changes in space, experiencing "space motion sickness" and more. END_OF_DOCUMENT_TOKEN_TO_BE_REPLACED

NASA’s Orion spacecraft blasted off this morning from Florida in the first stage of its 25-day journey to circle the moon and return to Earth. Two CU Boulder scientists talk about what lies in store for the space agency’s ambitious Artemis Program. END_OF_DOCUMENT_TOKEN_TO_BE_REPLACED
Return to the top of the page