University of Colorado Boulder students will have another four years at the controls of NASA’s Kepler mission, launched in 2009 to hunt down Earth-like rocky planets in other solar systems and which has succeeded in spectacular fashion.

NASA announced today the Kepler mission has been approved for extension through fiscal year 2016 based on a recommendation from NASA’s Senior Review panel.  Since 2009, the Kepler spacecraft has been used to identify more than 2,300 planet candidates by pointing at Milky Way stars and looking for faint, periodic dips in starlight signaling the transits of orbiting planets passing across the faces of star surfaces.

The mission extension will allow planetary scientists to continue to look for Earth-size planets in the habitable zone -­ the region in a planetary system where liquid water could exist on the surface of an orbiting planet -­ around sun-like stars in our galaxy.

A team of 20 students and 16 professionals from CU-Boulder's Laboratory for Atmospheric and Space Physics has been operating the spacecraft from the LASP Space Technology Building in the CU Research Park following Kepler’s launch in March 2009. The spacecraft was built by Ball Aerospace Technologies Corp. of Boulder.

“We are very excited to have the Kepler mission extended,” said LASP Mission Operations and Data Systems Director Bill Possel. “Kepler is one of the most exciting missions ever operated by LASP, and the scientific findings are truly remarkable.”

Possel said LASP hires students to support spacecraft operations each year, including a new group of students that will begin training at the end of May. “When our students graduate from CU-Boulder with their LASP experience, they have extensive knowledge of spacecraft systems and operations. This makes them highly sought after by NASA centers and aerospace companies.”

Tyler Fox, a junior majoring in computer science from Eads, Colo., said the experience is invaluable. “When I came to CU, I had no idea there were opportunities like this for undergraduates, and I didn’t know the university had such a great space program,” he said. “It has been an awesome experience to be involved in a mission like Kepler, and having two or three years of experience controlling satellites as undergraduates definitely gives students here a head start in the job market.”

Kepler mission discoveries beyond our solar system include the first rocky planet; the first multiple-transiting planet system; the first small planet in the habitable zone; the first Earth-size planets; the smallest Mars-size planets; and the confirmation of a new class of double-star planetary systems.

“Kepler has revolutionized our understanding of exo-planets and the study of stellar seismology and variability,” said Roger Hunter, Kepler project manager at NASA's Ames Research Center, Moffett Field, Calif. “There is currently no other mission in development that can replace or surpass the precision of Kepler. This extended mission will afford Kepler a unique opportunity to rewrite our understanding of the galaxy and our place in it.”

The CU-Boulder mission operations team works closely with Ball, which built the primary instrument for Kepler -- a one-meter telescope with a host of light-sensitive microchips -- and is the main mission contractor for the spacecraft. Ball also developed the Kepler spacecraft flight system and is supporting mission operations.

Since Kepler moved into its planet-hunting phase in June 2009, the LASP control team has been contacting the spacecraft twice a week to monitor onboard systems, including sensors, batteries, positioning control, voltages and temperatures, and to upload commands. The spacecraft is directed to point toward Earth once a month and to “dump” its science data to NASA's Deep Space Network, a collection of antennas around the globe that support planetary and astronomical missions. The data is then transmitted to LASP during individual sessions lasting from 24 to 36 hours, Possel said.

LASP sends the data on to the Space Telescope Science Institute in Baltimore, said Possel. Science data analysis will be carried out by NASA’s Ames Research Center. “It’s exciting to know our controllers are the first people to see the data from Kepler, even if we are not involved in the analysis,” said Possel.

LASP currently controls three other NASA spacecraft, including the Aeronomy of Ice in the Mesosphere, or AIM, the Solar Radiation and Climate Experiment, or SORCE, and the Quick Scatterometer, or QuikSCAT.

LASP hires 10 to 15 undergraduates annually for training as satellite operators at the conclusion of their sophomore years, said Possel. The students go through an intensive 10-week summer training program followed by practical and written tests leading to certification as satellite controllers by LASP. Starting in the fall, the students work 20 hours per week, including nights, holidays and CU-Boulder's winter and spring breaks.

“It is demanding on these students to juggle their missions operations work with their daily classes,” said Possel. Most LASP student controllers are majoring in space science, engineering or computer science, although nothing precludes participation by nonscience majors, he said.

NASA’s Ames Research Center manages the Kepler mission. The principal investigator of the mission is William Borucki of NASA Ames. 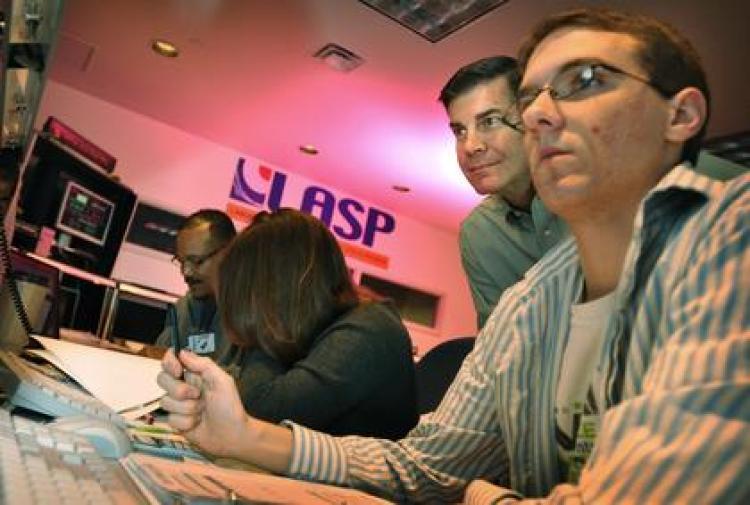 Bill Possel, director of Mission Operations and Data Systems for the Laboratory for Atmospheric and Space Physics at the University of Colorado Boulder, second from right, works with Matt Lenda, a former aerospace engineering undergraduate student, as he goes through a mock flight test in the command center for the NASA planet-finding mission called Kepler in 2010. (Photo by Glenn J. Asakawa/University of Colorado)

“We are very excited to have the Kepler mission extended,” said LASP Mission Operations and Data Systems Director Bill Possel. “Kepler is one of the most exciting missions ever operated by LASP, and the scientific findings are truly remarkable.”
Categories:

When he was in high school, Daniel Pette was fascinated by stars. When his earth science teacher told him that massive stars die out faster than smaller ones, Pette diagrammed a theory to figure out why this was. When he discovered that his findings were correct, Pette became determined to pursue a career in astrophysics. END_OF_DOCUMENT_TOKEN_TO_BE_REPLACED

CU-Boulder's Penina Axelrad , professor and chair of the Department of Aerospace Sciences, received the 2015 Aerospace Educator Award from the Women in Aerospace association. END_OF_DOCUMENT_TOKEN_TO_BE_REPLACED

It’s August and that means the hottest show in the night sky -- the Perseid meteor shower -- will make its annual appearance, peaking in the pre-dawn hours of Aug. 11 to 14. END_OF_DOCUMENT_TOKEN_TO_BE_REPLACED
Return to the top of the page