Students in Focus: Autonomous companion dog for people with dementia 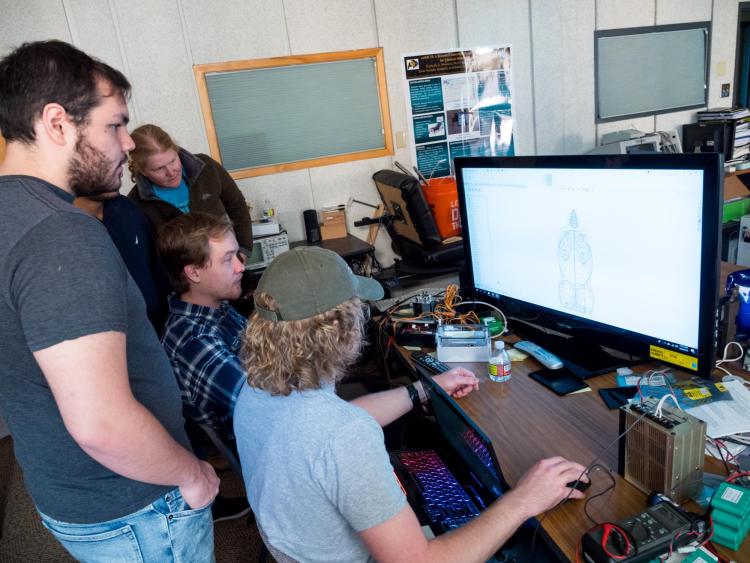 Aging adults with dementia or elderly people who live alone often face a diminishing quality of life. An undergraduate capstone team of CU Boulder engineering students hopes to relieve the confusion, fear and isolation these people feel by designing a robotic animal that will provide a companionable presence.

Meet Rover, a robotic companion animal that wants to be your new best friend.

The goal is to create a robotic companion dog that can improve the quality of life for elderly people with cognitive impairment. Rover will be able to move around the house independently and distinguish “its” person from other people through facial recognition. The team is developing software that will enable Rover to identify specific features on the human face and body.

With close relatives affected by dementia, Mohammad Alnoaimi, a senior in electrical engineering, feels a personal attachment to this senior capstone project.

“It’s hard to watch family members suffering from dementia,” Alnoaimi said. “The Rover project has the potential to break into a niche market. We wanted a project that’s an eye-opener. This is a field with a lot of potential to grow. It’s untouched ground so far.”

We want it to seamlessly fit into a person’s life. It should feel familiar and nonthreatening. We want it to function like a real pet, but you don’t have to feed it.” –Christopher Maesaka

Rover’s tactile sensors will allow it to respond to touch and sound, and to a variety of verbal commands, such as “Come here,” “Follow me,” and “Sit.” It will also be able to express emotions such as happiness and contentment. The robot will be able to track the person and stay nearby to keep them company.

The team sees a pressing need for Rover. The world’s older populations are growing at an unprecedented rate, according to the National Institutes of Health. Adults 65 and older represent 8.5 percent of people worldwide. By 2050, that number is projected to rise to nearly 17 percent. About half of people turning 65 will require long-term care at some point, according to the U.S. Department of Health and Human Services.

Rover’s positive effects will be similar to those of a real therapy animal. Only a few robotic companion animals are on the market, such as a Japanese-made seal, but none does what Rover will once the project is complete.

“We want it to seamlessly fit into a person’s life,” said Christopher Maesaka, a senior in electrical engineering. “It should feel familiar and nonthreatening. We want it to function like a real pet, but you don’t have to feed it.”

The Rover project is an example of the hands-on focus of the College of Engineering and Applied Science’s comprehensive curriculum. Students are drawing on their education in such disciplines as radio frequency, embedded systems, robotics, biomedical engineering, power electronics, renewable energy systems and chassis design.

Kimberly Newman, assistant professor in electrical, computer and energy engineering, who serves as the team’s mentor, estimates it will take three engineering teams to launch a fully functional Rover.

“I have aging relatives, some with dementia,” Newman said. “There’s a lot of concern about aging in place and aging with dignity. What we’re working on here is an innovation. We should be bold, go out there, get it on the market, and show people what we’re doing at CU.”

To help support the engineering students design and develop the Rover robotic companion animal, go to the Rover crowdfunding page.

Sarah Luettgen is building a future as an aerospace professional, studying the space domain of satellite orbits in the extreme upper reaches of Earth’s atmosphere. END_OF_DOCUMENT_TOKEN_TO_BE_REPLACED

Buffs soccer captain Hannah Sharts talks about playing every minute, scoring as a defender and how she’s using her name, image and likeness to help promote female student-athletes. END_OF_DOCUMENT_TOKEN_TO_BE_REPLACED
Return to the top of the page