A team led by CU Boulder has been selected to build a tiny orbiting satellite to study the evaporating atmospheres of gigantic “hot Jupiters”—distant gaseous planets orbiting scorchingly close to their parent stars.

To date, more than 100 gas giants have been discovered orbiting very close to their parent stars, said CU Boulder Assistant Professor Kevin France of the Laboratory for Atmospheric and Space Physics (LASP), lead scientist on the four-year, $3.3 million effort funded by NASA. France and his colleagues believe the new study of hot Jupiters—some of which are so close to parent stars they orbit them in a matter of days—will help planetary scientists better understand the evolution of our own solar system.

“Hot Jupiters are a natural lab for us to look at atmospheric processes that may have been important in our solar system’s evolution,” France said. 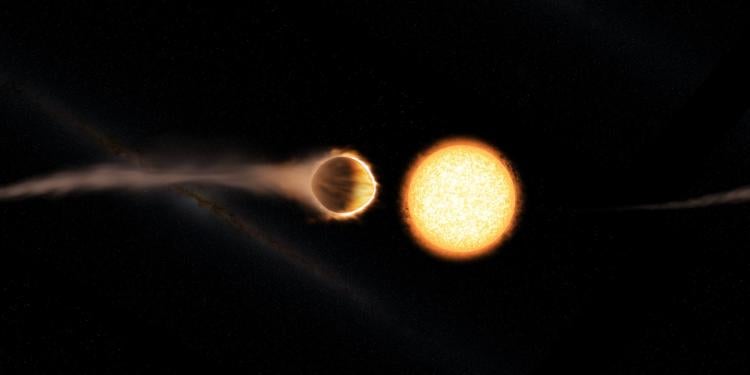 The team is building a CubeSat satellite called Colorado Ultraviolet Transit Experiment (CUTE), which is about the size of a shoebox and which will carry an ultraviolet telescope. The UV region of the spectrum was chosen for study because it is a “sweet spot” both for star brightness and for finding heavy elements, France said.

The researchers plan to measure the rates and compositions of escaping gases from hot Jupiter atmospheres as the planets transit across the face of their bright parent stars and will look for evidence of magnetic fields on the gas giants.

Some hot Jupiters are losing mass so fast they have tails similar to comets that face away from their parent stars, in large part because stellar winds can blow off stars at more than a million miles per hour. “The atmospheres are pulled along by the stellar wind, which blows them backward and gives them a comet-like appearance,” he said.

In the planetary atmospheres of our solar system, the heaviest elements sink, said France. On Earth, elements like iron and silicon have sunk into the rock mantle, while lighter elements like nitrogen and oxygen remain in the planet’s atmosphere.

“What we expect to find on these hot Jupiters is that the mass loss is happening so fast that heavy elements are being pulled from inside the planets and spit into the escaping atmosphere,” said France, a faculty member in the Department of Astrophysical and Planetary Sciences (APS). “We anticipate seeing the signatures of heavy elements like magnesium and iron getting tossed out of the planets as they evaporate.”

France says the team hopes to study between 12 and 20 hot Jupiters during the primary mission, expected to launch in early 2020 and last eight months to a year. Hot Jupiters orbit their parent stars up to 10 times closer than Mercury, Earth’s innermost planet, which takes 88 days to orbit the sun.

The CUTE team also includes instrument design leader and APS Research Professor Brian Fleming, CUTE Project Manager Rick Kohnert of LASP, a team of LASP engineers and several graduate students. In addition, The CUTE team includes researchers from the University of Arizona; the Space Research Institute of the American Academy of Science in Graz, Austria; Trinity College in Dublin, Ireland; the University of Toulouse, France; and the University of Amsterdam in the Netherlands.

France’s team also is collaborating with Blue Canyon Technologies of Boulder, which is building the platform that will house the CUTE payload. The platform will provide the mission’s power, command, data handling, attitude control and communications.

“This is a really great opportunity to have students get involved in all phases of a NASA mission as they move into their careers,” said France. “CU Boulder has a long history of training NASA’s future leaders in the space sciences, and the CUTE program will extend that heritage to a new generation of scientists with access to small satellite opportunities.”

Ahead of the historic space mission, crew members joined CU Boulder researchers Allie Anderson and Torin Clark to talk about how the eye changes in space, experiencing "space motion sickness" and more. END_OF_DOCUMENT_TOKEN_TO_BE_REPLACED

NASA’s Orion spacecraft blasted off this morning from Florida in the first stage of its 25-day journey to circle the moon and return to Earth. Two CU Boulder scientists talk about what lies in store for the space agency’s ambitious Artemis Program. END_OF_DOCUMENT_TOKEN_TO_BE_REPLACED

CU Boulder geologist Lisa Mayhew serves on the science team for NASA’s Perseverance rover, an intrepid machine that has crossed over nearly 8 miles of the surface of Mars—and is helping to recreate the forces that shaped this planet into what it looks like today. END_OF_DOCUMENT_TOKEN_TO_BE_REPLACED
Return to the top of the page