The following content is co-posted from the Harvard-Smithsonian Center for Astrophysics. Zach Berta-Thompson, an assistant professor in CU Boulder's Department of Astrophysical and Planetary Sciences, is a co-author of the new research. 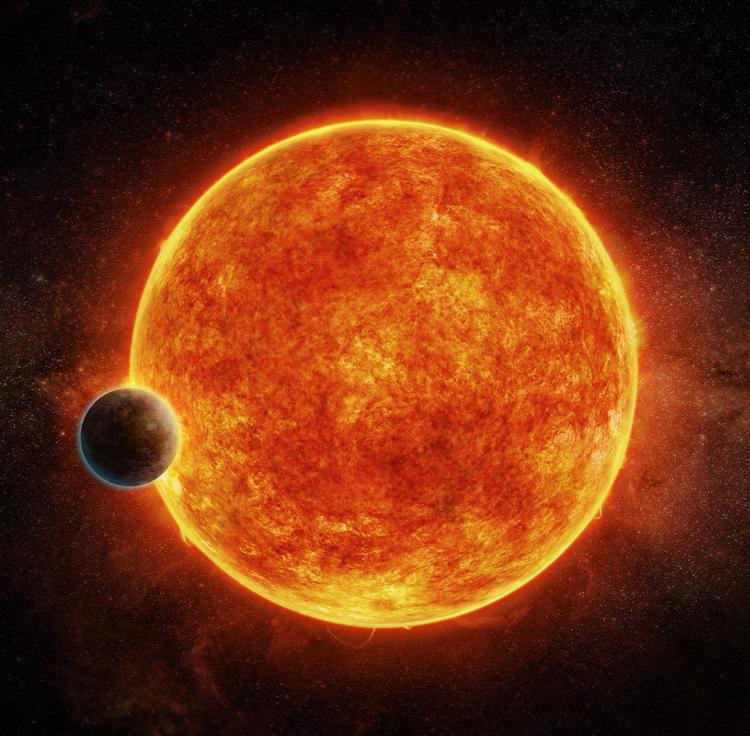 An artist’s impression of the newly-discovered rocky exoplanet, LHS 1140b. This planet is located in the liquid water habitable zone surrounding its host star, a small, faint red star named LHS 1140. The planet weighs about 6.6 times the mass of Earth and is shown passing in front of LHS 1140. Depicted in blue is the atmosphere the planet may have retained. Credit: M. Weiss/CfA

The study of alien worlds is entering its next phase as astronomers amass the best planets outside our Solar System to look for signs of life. A newly discovered “super-Earth” orbiting in the habitable zone of a nearby small star, has catapulted itself to the top of that list.

“This is the most exciting exoplanet I’ve seen in the past decade,” said lead author Jason Dittmann of the Harvard-Smithsonian Center for Astrophysics (CfA). “We could hardly hope for a better target to perform one of the biggest quests in science − searching for evidence of life beyond Earth.”

The newfound planet is described in a paper appearing in the April 20th issue of the journal Nature.

Located just 40 light-years away, the planet was found using the transit method, in which a star dims as a planet crosses in front of it as seen from Earth. By measuring how much light this planet blocks, the team determined that it is about 11,000 miles in diameter, or about 40 percent larger than Earth.

The researchers have also weighed the planet to be 6.6 times the mass of Earth, showing that it is dense and likely has a rocky composition. Small, potentially habitable planets have been found in the TRAPPIST-1 system, located a similar distance for Earth, but only one of those worlds has had its density measured accurately, showing that it isn't rocky. Therefore, some or all of the others also might not be rocky.

Since this planet transits its star, unlike the closest world Proxima b, it can be examined for the presence of air. As the planet moves in front of the star, the star’s light will be filtered through any atmosphere and leave an imprint.  Large, next-generation telescopes will be needed to tease out these subtle signals.

“This planet will be an excellent target for the James Webb Space Telescope when it launches in 2018, and I'm especially excited about studying it with the ground-based Giant Magellan Telescope, which is under construction,” said co-author David Charbonneau of the CfA.

The planet orbits a tiny, faint star known as LHS 1140, which is only one-fifth the size of the Sun. Since the star is so dim and cool, its habitable zone (the distance at which a planet might be warm enough to hold liquid water) is very close. This planet, designated LHS 1140 b, orbits its star every 25 days. At that distance, it receives about half as much sunlight from its star as Earth.

Although the planet is potentially habitable now, it might have faced a hellish past. When the star was young, it would have bathed the planet in a harsh ultraviolet glare that could have stripped any water from the atmosphere, leading to a runaway greenhouse effect like we see on Venus.

However, since the planet is larger than Earth, it might have possessed a magma ocean on its surface for millions of years. Powered by heat from naturally radioactive elements, that churning ocean of lava may have fed steam into the atmosphere long after the star calmed to its current, steady glow. This process could have replenished the planet with water, making it suitable for life as we know it.

“Right now we’re just making educated guesses about the content of this planet’s atmosphere”, said Dittmann. “Future observations might enable us to detect the atmosphere of a potentially habitable planet for the first time. We plan to search for water, and ultimately molecular oxygen.”

In contrast with the TRAPPIST-1 star, LHS 1140 spins slowly and does not emit much high-energy radiation, which also may help the likelihood of life on its planet.

In follow-up work the team was able to detect LHS 1140 wobbling as the planet orbits it, using the High Accuracy Radial velocity Planet Searcher (HARPS) installed on the European Southern Observatory’s 3.6m telescope at La Silla Observatory in Chile. This information was combined with data from the transit method, allowing the team to make good measurements of the planet’s size, mass and density.

The MEarth Project is supported by the National Science Foundation, the David and Lucile Packard Foundation, and the John Templeton Foundation.

Headquartered in Cambridge, Mass., the Harvard-Smithsonian Center for Astrophysics (CfA) is a joint collaboration between the Smithsonian Astrophysical Observatory and the Harvard College Observatory. CfA scientists, organized into six research divisions, study the origin, evolution and ultimate fate of the universe.

CU Boulder has been selected as a member of the United States Space Command Academic Engagement Enterprise, a new national program designed to expand collaboration and academic exchanges between universities and Space Command. END_OF_DOCUMENT_TOKEN_TO_BE_REPLACED

Since July 2022, a miniature satellite about the size of a shoebox has been orbiting Earth and monitoring how much solar energy reaches the atmosphere, one of the "most important" Earth science measurements. Now, scientists are finalizing their analysis of the first five months of the testing. END_OF_DOCUMENT_TOKEN_TO_BE_REPLACED

The historic spacecraft soon hit Earth's atmosphere flying at speeds of almost 25,000 mph. CU Boulder aerospace engineer Iain Boyd breaks down what will happen to the capsule, and how NASA will keep it safe on reentry. END_OF_DOCUMENT_TOKEN_TO_BE_REPLACED
Return to the top of the page