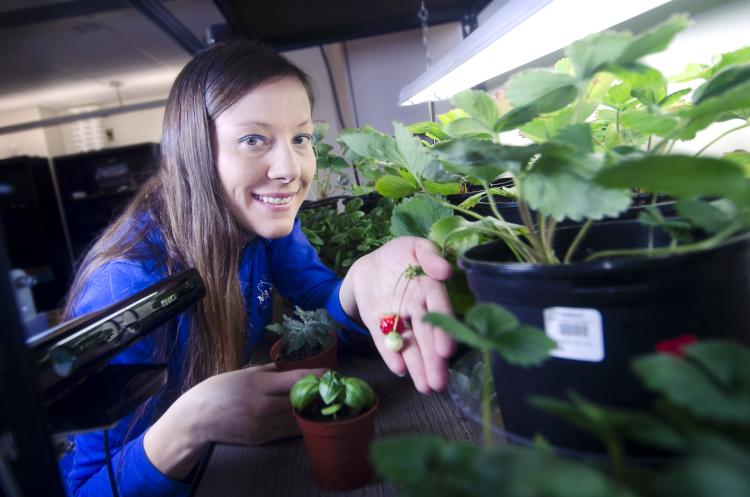 Graduate student Heather Hava’s gardening skills are out of this world.

Hava, who is in aerospace engineering sciences, has dedicated much of her CU Boulder academic life to developing advanced fruit and vegetable gardening systems that may someday be used by spacefarers living in outposts on Mars or the moon. Think movie astronaut Mark Watney, who actor Matt Damon played in The Martian.

In October, Hava was a speaker at a panel discussion on long-term space exploration at Pittsburg’s Carnegie Mellon University as part of the inaugural White House Frontiers Conference focused on advancing U.S. science, technology and innovation.

“The natural evolution of a society is to go out and explore,” says Hava. “And at some point we will move off the Earth and out into the solar system. Space gardening is one of the first steps to getting there.”

In September, Hava and former CU Boulder student Daniel Zukowski were one of six graduate student team finalists in the 2016 national Collegiate Inventors Competition. The pair was nominated for developing a plant growth chamber and accompanying software that could be used by astronauts for space gardening.

Hava is a pioneer in her field. She has designed and built a device called SmartPot (SPOT), which is a compact hydroponic chamber for growing plants in space. Nutrient-rich water circulates through the chamber, which is autonomously controlled for temperature, humidity, light and ventilation and can be operated by either astronauts in space or remotely by NASA’s mission control on Earth.

Hava and her team also developed an accompanying software package, called AgQ, to process SPOT data using a variety of sensors placed inside the chamber.

In addition, she led the development of the Remotely Operated Gardening Rover (ROGR), which has the ability to buzz around in a space habitat, perhaps on Mars, to check on and even harvest space gardens. ROGR was part of NASA’s X-Hab Innovation Challenge, which annually awards monetary prizes to student research teams at a handful of universities to advance technology for deep-space missions.

So it is really no surprise to those in the know that Hava won the $15,000 “Eat it!” Lemelson-MIT graduate student prize last spring, making her the top graduate student inventor for technology-based advances that can improve food and agriculture.

“Eating is the one of most fundamental, basic things we do as humans,” she explains. “So part of what I do is develop robots that can garden in space.”

Gardening is a morale booster for astronauts living in a “machine environment,” she explains. Using plants to improve astronaut psychological health and cognitive performance is a major aspect of her research.

Her advisor Assistant Professor Nikolaus Correll of computer science said Hava is a driven person who has racked up a number research awards in recent years. “I know she would like to be selected to be an astronaut someday,” Correll says. “Frankly, I’m not surprised at anything Heather does once she puts her mind to it.”

But Hava still has an “Earth” side to her. She invented and patented a geodesic dome structure that could be used for horticulture, sustainable housing and disaster relief around the globe. Hava also completed Master Gardener training in “permaculture,” a system of agricultural and social design principles that uses patterns and features observed in natural ecosystems.

Hava is working on commercializing her inventions through her two Colorado-based startup companies: Autoponics, of Longmont, to develop food production for space habitats and Stellar Synergetics LLC, of Golden, specializing in geodesic dome structures and design.

“These technologies not only can solve long-term human space exploration challenges,” she explains. “In the near-term they also have the ability to help our planet meet the growing challenges of feeding 9 billion people.”

Hava’s academic emphasis is bioastronautics, which encompasses biological, behavioral and medical aspects of humans and other living organisms in a spaceflight environment. The program includes the design of payloads, spacecraft habitats and life-support systems.

In order to keep her research moving forward, Hava said she is continually seeking funding for both her research and companies.

A recipient of a four-year NASA Space Technology Research Fellowship in 2012, Hava has serious aspirations to become a NASA or commercial astronaut.

“I could potentially see myself as one of the first space gardeners on Mars,” she says. “How can it get any better than floating in space and eating a fresh strawberry?”

Researchers from the Laboratory for Atmospheric and Space Physics (LASP) worked side-by-side with teams from the United Arab Emirates to help them make this history-making mission a reality. END_OF_DOCUMENT_TOKEN_TO_BE_REPLACED

Two new studies by researchers at CU Boulder may help to solve one of space’s biggest mysteries: why the solar system’s “detached objects” don’t circle the sun the way they should. END_OF_DOCUMENT_TOKEN_TO_BE_REPLACED

Aging satellites and space debris crowd low-Earth orbit, and launching new satellites adds to collision risks. The most effective way to solve the space junk problem involves an international agreement to charge operators orbital-use fees. END_OF_DOCUMENT_TOKEN_TO_BE_REPLACED
Return to the top of the page