The Colorado economy continues to outperform the U.S. economy and grow at a magnitude that slightly exceeds previous expectations, according to the midyear economic outlook released today by the University of Colorado Boulder’s Leeds School of Business.

The midyear outlook projects growth in all of the state’s sectors except for information, which includes publishing and telecommunications.

“The growth for Colorado that we are forecasting for 2014 would make it the fourth fastest growing state in the country,” said economist Richard Wobbekind, executive director of the Business Research Division, which conducts the midyear outlook. “Colorado is growing at roughly twice the pace of the national economy in terms of job growth. It continues to be a shining star in the grand scheme of things, as it was in 2013.”

Wobbekind, who is also the senior associate dean for academic programs at the Leeds School, presents the Colorado Business Economic Outlook each December -- an outlook that’s updated each summer. He recently met with steering committee members who represent the state’s major economic sectors for the 2014 midyear update.

--Agriculture: Winter wheat production is forecast at 84.2 million bushels in 2014, dramatically up from 2013’s drought-ridden output of 44.3 million bushels. Topsoil and subsoil moisture levels are adequate on about 50 percent of Colorado farm acres, an improvement from below 20 percent adequacy in 2013. Cattle and calves inventory as of May 1 is estimated at 960,000.

However, dry conditions particularly in the southeast corner of the state continue to cause concerns that have made ranchers hesitant to increase herd sizes.

--Construction: Construction employment has grown in the state by 8 percent since May of 2013 and totals 135,500 jobs. However, this is 20.3 percent below the peak levels in 2007. Demand currently is high for homes for sale and inventory is low.

--Manufacturing: Manufacturing has grown faster than expected in the first half of 2014, exceeding committee expectations particularly for durable goods. This marks the third straight year of employment gains in the sector following 10 straight years of losses. Employment in the sector currently is at 136,100 jobs -- a 2.8 percent increase from a year ago. Though nondurable goods are growing more slowly than expected, demand for craft beer and spirits has buoyed this part of the sector.

--Trade, transportation and utilities: Colorado’s trade, transportation and utilities sector increased just 1.2 percent from May 2013 to May 2014. This growth can be attributed to slight increases in employment in the wholesale and retail trade segments. A decrease of about 1,500 jobs occurred year-over-year in the transportation and warehousing segment of the sector. Regarding utilities, the Environmental Protection Agency has set a 35 percent reduction in carbon emissions by 2030, but Colorado’s energy providers appear to be far ahead in reaching the goal, according to the committee.

--Financial activities: While overall employment in the financial activities sector was nearly flat year-over-year, the subcategory of real estate, rental and leasing grew by 1.4 percent. Home prices in Colorado are up 7.6 percent with a median sale price of $251,750 -- growth that’s expected to slow in 2015 to an estimated 1.5 percent.

--Professional and business services: Within the professional and business services sector, which added 17,500 jobs year-over-year, the professional, scientific and technical services subsector accounts for half of the sector’s employment. Colorado remains a hub of activity in industries that require highly skilled labor and are high-paying, such as aerospace and clean energy, as well as consulting and legal services, according to Wobbekind.

--Education and health services: Health care and social assistance, which makes up a majority of the education and health services sector, added 4,900 jobs year-to-date and grew 4.5 percent year-over-year. The long-term economic impacts of the Affordable Care Act remain to be seen, but the health care exchange and pent-up demand for health care is credited for a 10 percent jump in national health care spending that added $43.3 billion in national consumer spending, according to the report.

The Denver International Airport is the fifth-busiest airport in the nation with increasing service from low-cost carriers and new flight destinations such as the recently added United Airlines flight to Panama City. Colorado’s ski industry experienced a record-breaking year in 2013-14 with the help of an early start to the season and a late finish. Colorado will again be on the world stage when the fourth annual USA Pro Cycling Challenge takes place in August. 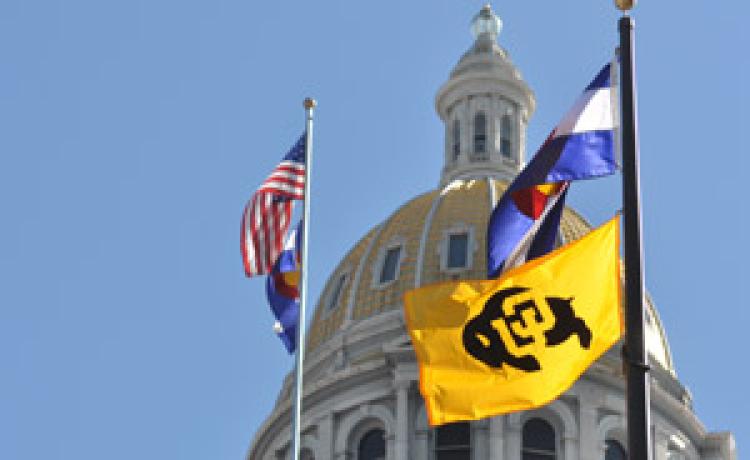 The CU flag flies outside of the Colorado State Capitol building. (Photo by Casey A. Cass/University of Colorado)

How entrepreneurs and executives use traditional financial market tools to serve social needs will be the focus of a free CU-Boulder conference from 10 a.m. to 4:30 p.m. Wednesday at the Folsom Field Stadium Club. END_OF_DOCUMENT_TOKEN_TO_BE_REPLACED 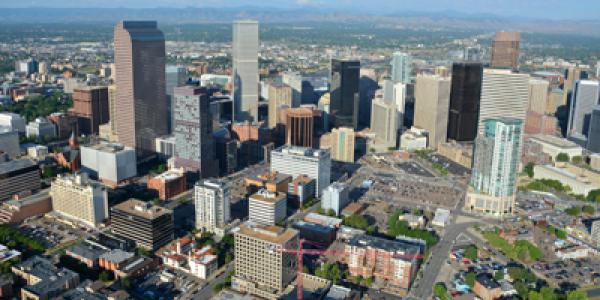 Despite a dip in business filings in Colorado during the third quarter of 2015 with 25,164 new entities recorded, employment in the state is projected to expand over the next two quarters, according to a University of Colorado Boulder report released Oct. 27 by Colorado Secretary of State Wayne Williams. END_OF_DOCUMENT_TOKEN_TO_BE_REPLACED

The confidence of Colorado business leaders again dipped slightly going into the fourth quarter of 2015, but remains in positive territory, according to the Leeds Business Confidence Index released today by the University of Colorado Boulder’s Leeds School of Business. END_OF_DOCUMENT_TOKEN_TO_BE_REPLACED
Return to the top of the page