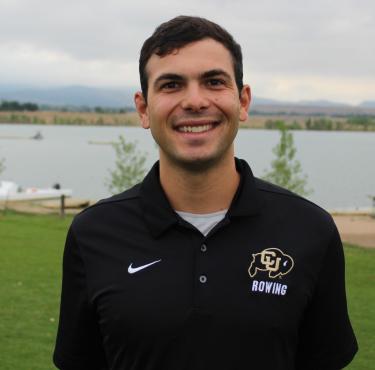 Roman began his rowing career at Oakland Stroke his Junior year of high school. He joined the Colorado Crew when a few friends in his dorm convinced him to get back on the water again. He completed 4 years rowing at CU, including one spring while studying at the University of Waikato in Hamilton, New Zealand and graduated with a BA in Mathematics. Roman still rows his single and often rows with Boulder Community Rowing.

Roman began his coaching career with Colorado Junior Crew during his senior year of college and began his first stint at CU as Novice Coach from 2016-2018. He volunteered with the Boston University Men during the 2018-2019 season under legendary coaches Tom Bohrer and John Lindberg, and First Assistant Alex Perkins. He assisted with the third and fourth Varsity 8’s for Eastern Sprints and coached the 4+ to a Petite Finals win at IRA. While in Boston, he attended the Institute for Rowing leadership earning an Advanced Certificate in Rowing Leadership.

Roman's coaching philosophy is centered around effectiveness. While some athletes are born with fast philology, anyone can become an effective oarsman with the proper discipline and training. He is incredibly passionate about the sport of rowing and strives to spark the same passion within his athletes. While his primary duty is to teach rowing, he also encourages his athletes to be better people and relates the lessons learned in rowing with the real world. While many collegiate rowers choose to “weigh enough” after graduation, the values and skills they learn in the boat stick the rest of their lives. Roman has worked as a computer support technician since 2011 and uses this background to integrate technology and data with his coaching.