Repeat Observations by Gliders in the Equatorial Region (ROGER) 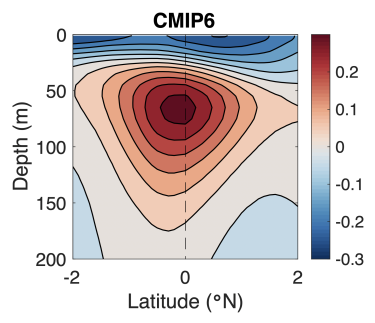 As described in the paper, all CMIP3, CMIP5 and CMIP6 global climate model outputs were initially acquired from the Earth System Grid Federation (ESGF). Monthly means from the 1990s were extracted from each model’s historical experiment (labeled “Climate of the Twentieth Century” [20C3M] in CMIP3, and simply “historical” in CMIP5 and CMIP6). A much-reduced and harmonized version of the entire CMIPx ocean zonal velocity (and potential temperature and salinity for CMIP6) output data set was then produced by retaining the time-means of 3D output within the domain 160°E–80°W, 3°S–3°N, 0–400 m and linearly regridding to a common grid (0.25° in longitude, 0.1° in latitude and 1 m in depth). Sections along 93°W were also saved. The resulting analysis sets are provided freely here. Each link below leads to a folder containing one .mat file for each model, which can be downloaded individually or en masse. This table is necessary to match model numbers with the official CMIPx model identifiers (e.g., C5_M11.mat = CMIP5 / GFDL CM3).