Seasonal predictions of the number of named storms issued by NOAA, CSU, and by the OLR-based algorithm developed in Karnauskas and Li (2016) are shown below. Finalized OLR-based predictions will be posted on or around June 2 (pre-season), July 2 (one month in), and August 2 (two months in) of each year, as there is a ~2 day lag in the retrieval and processing of satellite OLR measurements. The OLR-based predictions are calculated using two different techniques: linear regression (LR) and random forest (RF; a machine learning technique). Predictions made via both techniques are provided.

A note about uncertainties: NOAA issues ranges only, and CSU issues a single number only. The uncertainties on the OLR-based predictions published here will match those of NOAA each year. In other words, if NOAA's prediction is N ± 3, then the number of storms predicted by the OLR-based algorithm ± 3 will be displayed here. If the NOAA range (maximum minus minimum) is an odd number, the extra storm in the range will go into the direction from which the OLR-based prediction was rounded to the nearest whole number. 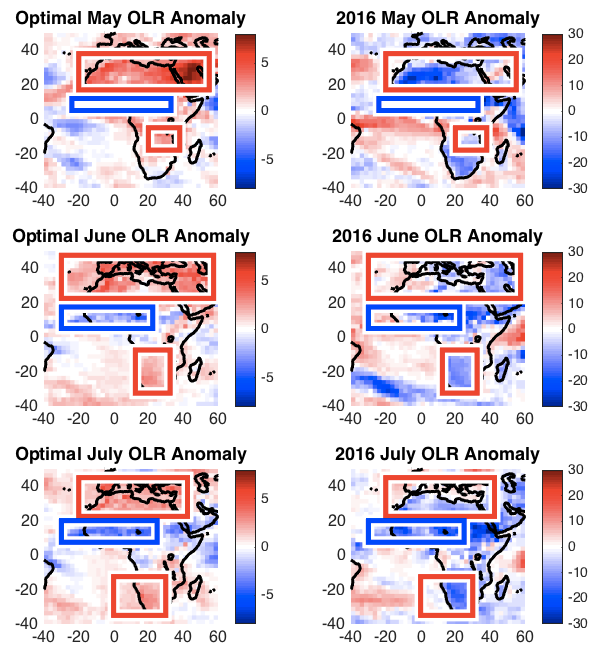 The maps below show the 2-day and 5-day tropical weather outlooks issued by the NOAA National Hurricane Center (NHC). Click on the images for the NHC page with more information.