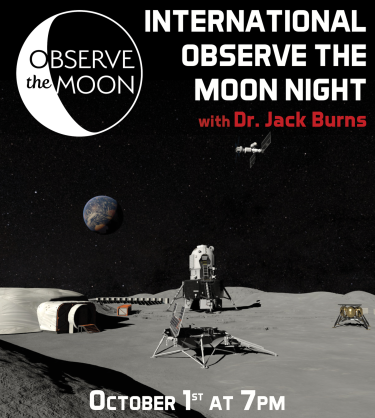 International Observe the Moon Night on October 1 at 7pm

Celebrate NASA's International Observe the Moon Night at Fiske Planetarium in Boulder, Colorado with our new fulldome film Forward! To the Moon, supported by NASA and Lockheed Martin. Kari Byron from MythBusters narrates the film and launches us on a journey beyond the Earth towards a sustainable future in space. NASA’s 21st century Artemis program, named after the Greek moon Goddess and twin of Apollo, is the next step in our mission to explore the universe. Dr. Jack Burns from NASA's NESS program will join us and talk about making the film and answer your questions about space exploration to the Moon, Mars and beyond.

After the film and talk, stay and enjoy CAPCOM GO! The Apollo Story and Laser Floyd Dark Side of the Moon. Plus, observe the moon through the telescopes at Sommers-Bausch Observatory from 8-10 p.m.

Bio: Jack Burns, Ph.D. is a Professor in the Department of Astrophysical and Planetary Sciences and a Professor in the Department of Physics, both at the University of Colorado (CU) Boulder, and is Vice President Emeritus for Academic Affairs and Research for the CU System.  Jack is also the Director and Principal Investigator of the NASA-funded Network for Exploration and Space Science. In addition, he has longstanding ties with NASA and served on the NASA Advisory Council from 2008-2010, Chair of the Council’s Science Committee from 2009-2010, and as a member of the 2016-2017 Presidential NASA transition team. Additionally, Jack served as the Senior Vice President of the American Astronomical Society from 2014-2017.

Forward! To the Moon Premiere Events

Forward! To the Moon, a 25-minute fulldome film featuring the NASA Artemis program, engages audiences in the pursuit to land the first woman and person of color on the surface of the Moon this decade.

The film features current and aspiring astronauts along with robotic explorers that will help further our understanding of the origin and evolution of the Moon, Solar System, and cosmos.

Dr. Jack Burns gave a virtual presentation on February 16, 2022 for the New Hampshire Astronomical Society about the future of human and robotic exploration of the Moon and beyond, inspired by the approach taken by Silicon Valley computer and commercial space companies.

NASA’s Orion and Space Launch Systems along with rockets and landers by SpaceX and Blue Origin will be described. Show how such Moon and Mars can be explored via governmental programs, international partnerships, and even public-private-academic partnership. The tools for exploration include telerobotics where astronauts aboard NASA’s Lunar Gateway in orbit of the Moon will operate rovers and deploy telescopes on the lunar surface in a new synergy between robots and humans. Watch the video. 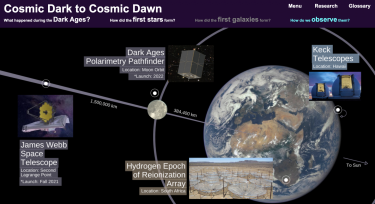 Our NESS collaborators at UCLA have released a public outreach website describing the science of the Cosmic Dawn, with a particular focus on potential contributions to studying this era by lunar radio telescopes.