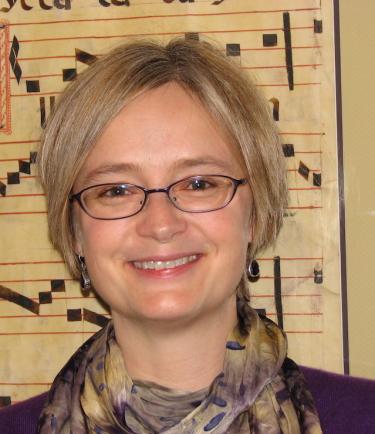 Rebecca Maloy specializes in early medieval music. Her primary interests are liturgical chant, liturgy and ritual, and the theory and analysis of early music. She is the author of Inside the Offertory: Aspects of Chronology and Transmission (Oxford 2010), the co-author, with Emma Hornby, of Music and Meaning in Old Hispanic Lenten Chants (Boydell and Brewer 2013) and the co-editor, with Daniel J. DiCenso, of Chant, Liturgy, and the Inheritance of Rome (Boydell and Brewer). Her work is published in Music & Letters, Early Music, Journal of the American Musicological Society, Early Music History, Plainsong and Medieval Music, Journal of Musicology, Studia Musicologica, and in interdisciplinary collections such as El canto mozarábe y so entorno: Estudios sobre la música de la liturgia viejo hispánica and The Sequences of Nidaros: A Nordic Repertory in Its European Context.

Maloy’s current work examines the Old Hispanic chant of the Iberian Peninsula from historical, liturgical, theological and musicological perspectives. She is exploring how the Old Hispanic chant was integrated with other liturgical elements, how it relates to the traditions of biblical exegesis practiced on the Iberian Peninsula and how it is connected to other Western chant traditions. Her work incorporates paleographic study of its notation, the relationship between words and music, and the intersection of the liturgy with patristic theology. Her book Songs of Sacrifice: Chant, Identity, and Christian Formation in Early Medieval Iberia (Oxford University Press) situates the chant as part Visigothic Iberia’s intellectual and cultural renewal in the seventh century.

As an avid interdisciplinary collaborator, Maloy was a member of the EU-funded Old Hispanic Office Project at Bristol University (2013-2018). With Emma Hornby, Kati Ihnat and Raquel Rojo-Carillo, she is a co-author of An Introduction to the Old Hispanic Office: Texts, Melody and Theology. She currently collaborates with an international group of historians and musicologists on the project Doctrine, Devotion and Cultural Expression in the Cults of Medieval Iberian Saints. Other projects include work on the Old Roman chants for the Mass of the Dead, in collaboration with Luisa Nardini. Her current and recent work has been supported by funding from the European Research Council, the Arts and Humanities Research Council in the United Kingdom, the American Council of Learned Societies and the Institute for Advanced Study in Princeton, where she spent the 2016-2017 academic year.

Maloy is a Distinguished Professor, only the third to bear that title in the College of Music. She currently serves as director of the CU Boulder Center for Medieval and Early Modern Studies in the College of Arts and Sciences.