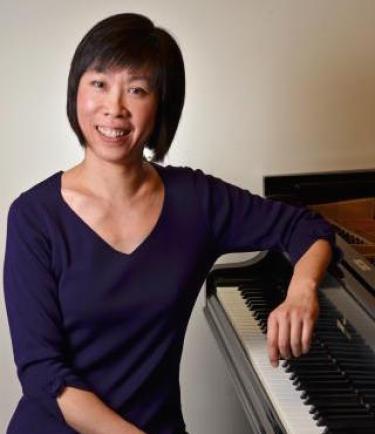 Daphne Leong is Professor of Music Theory. Her research interests include rhythm, analysis and performance, the music of 20th- and 21st-century composers, and theories of cross-disciplinary collaboration. Her book, Performing Knowledge: Twentieth-Century Music in Analysis and Performance (Oxford Studies in Music Theory, 2019), was supported by a Kayden Research Grant, CU LEAP and GCAH grants, and a subvention from the Society for Music Theory. Her articles appear in Journal of Music Theory, Perspectives of New Music, Music Theory Online, Theory and Practice, Intégral, Gamut, and Acta Musicologica, as well as in edited collections on Bartók and Ravel and in the Norton Guide to Teaching Music Theory. Representative chapters and articles are “Performed Rhythm at the Center of Bartók’s Fifth String Quartet” (with the Takács Quartet), in Performing Knowledge (2019); “Time’s ‘Suchness’ in Robert Morris’s Clear Sounds,” Perspectives of New Music (2014); “Generalizing Syncopation,” Theory and Practice (2011); and “Humperdinck and Wagner: Metric Spaces, States, and Symmetries,” Journal of Music Theory (2007).

In 2023 she serves as Distinguished Visiting Professor and Dean’s Chair in Music at McGill University in Montréal, Canada. In fall 2022 she led a week-long series of workshops at the Sibelius Academy, Finland. She has presented on the plenary session of the Society for Music Theory, given a keynote for Indiana University’s Special Symposium on Performance and Analysis, and presented invited papers and lecture-recitals at the Hong Kong Academy for the Performing Arts, Brăiloiu Institute of Ethnography and Folklore in Bucharest, the Eastman School of Music, University of Kansas, Texas Tech University, and other national and international venues.

Leong has twice been a Fellow at the Mannes Institute for Advanced Studies in Music Theory (in “Rhythm and Temporality” and “Transformational Theory”), and has undertaken source studies at the Sacher Institute in Basel, Switzerland, the Bartók Archives in Budapest, the Hungarian Ethnographic Museum in Budapest, and the Brăiloiu Institute of Ethnography and Folklore in Bucharest.

She is also an active pianist and chamber musician, performing in recent years in the United States, Canada, the Netherlands, England, Romania, and Hong Kong. Her repertoire ranges from Bach to premieres of current music; three recent concert programs are May Treacherous Marbles (written for her), Ravel Ma Mère l’Oye, Messiaen Visions de l’Amen (2008); Mozart Quintet for Piano and Winds in Eb, Schoenberg Sechs kleine Klavierstücke Op.19, Mozart Quartet for Piano and Strings in Eb (2006); and the complete Chopin Études Op.25 (2014). In fall 2013 she premiered Morris’s Clear Sounds among Hills and Waters (dedicated to her) on a program that included Andriessen’s Hout and Shende’s Throw Down or Shut Up! She is a founding member of the quartet Throw Down or Shut Up! which presents new music in traditional and non-traditional formats (concert halls, jazz clubs, interactive concerts for children), and which has just issued its premiere recording. Leong's principal teachers were David Burge, Douglas Humpherys, and Robin Harrison.

In 2018–19 Leong directed Linking Music Theory and Practice, a year-long collaboration between the CU music theory department and five performance studios, culminating in the presentation of five undergraduate research projects. She received the 2013 Excellence in Teaching Award of the University of Colorado Boulder Faculty Assembly. Courses she has created range from graduate seminars on “performance and analysis,” “rhythm and meter,” “analysis of recordings,” and “analysis of music since 1945;” to courses on “theory and analysis of post-tonal music,” “new-music styles and practices,” and core theory and aural skills. In fall 2019, she led a Graduate Student Workshop for the Society for Music Theory on “twentieth-century music in analysis and performance.”

In 2019, Leong organized Rhythm in Music since 1900, a multi-disciplinary international conference with a keynote lecture-recital by pianist Pierre-Laurent Aimard. She has served as (elected) Vice-President of the national Society for Music Theory, as well as on the SMT’s Executive Board, Publication Awards Committee, Program Committee, Nominations Committee, and International Relations Committee; she chaired the SMT Interest Groups Task Force. She was founding chair of the “Performance and Analysis” Interest Group of the SMT, and curates its online Pedagogy Resource. Leong has organized three special sessions on performance and analysis for SMT national conferences. She has also served on the Kraehenbuehl Prize Selection Committee for the Journal of Music Theory, and acted as Program Chair of the Nancarrow Centennial Online Symposium. She serves on the Editorial Board of Intégral.