How do you give the impression that, as a young musician, your first Carnegie Hall performance is just another day on the job?

“We not only rehearsed—we had previous performances under our belts. So we weren’t plagued by anxiety.”

For Jonathan Morris and Claire Gunsbury, it all starts in your head.

“It helps to visualize the performance. Taking time outside the practice room to sit down, think through how it’ll feel, hear your footsteps as you walk across stage,” says Gunsbury. 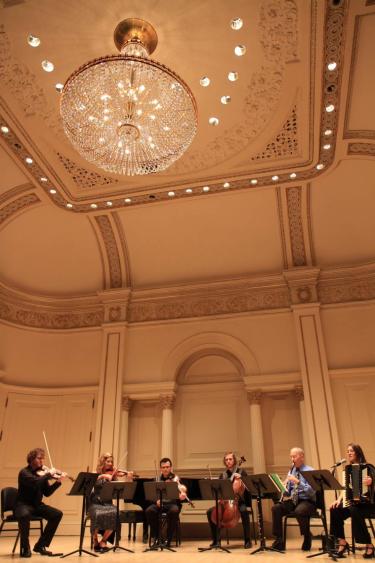 Adds Morris, “I like to visualize. I tried to imagine all the different scenarios so it wasn’t such a shock to be there.”

Baker, Gunsbury, Morris and nine other College of Music performers made their Carnegie Hall debuts last November at the college’s second CU at Carnegie showcase concert. The group of Colorado music ambassadors put on a dazzling performance of chamber works in the elegant and intimate Weill Recital Hall, giving an audience of family, colleagues and New York-based alumni a concert fit for the hallowed venue.

No matter the preparation technique, they all made it look easy. But that level of confidence didn’t happen overnight.

For Alicia Baker, the Ajax Quartet (Renée Hemsing-Patten, Tom Yaron, Mario Rivera and Eric Haugen) and Professor of Clarinet Daniel Silver, the journey to Carnegie began more than a year before they arrived in Midtown Manhattan. The group closed the concert with College of Music alumnus Conor Brown’s (MM ’18) "Ladun hiihin lau lajille," just one in a series of high-profile performances of the piece.

Baker put both her accordion and her voice to use for the challenging piece. “This was the first time I had a challenge of that size that was so perfectly geared toward me,” she says.

"Ladun hiihin lau lajille," which is sung in Finnish, was originally premiered in October 2017 at the College of Music’s celebration of the centennial of Finland’s independence. Since then, Baker and the rest of the ensemble have traveled to Denver, Washington, D.C., and even Helsinki to perform the piece for music lovers and dignitaries alike. They had arrived back stateside from Finland just days before the Carnegie Hall appearance.

“I really wasn't even that nervous because we were all so excited to present the piece again,” Baker says. “It spoke to all of us. We all loved playing it, and every time we did we got more and more connected.”

Playing off a connection

Sophomore flutist Claire Gunsbury and her Carnegie duo partner, senior guitarist Max Mondzac, began preparing their pieces with their professors Christina Jennings and Nicolò Spera back in August 2018. Before they even learned that they would be the tone-setting opening act at CU at Carnegie, the pressure was on.

“It’s Carnegie Hall,” Gunsbury says. “Huge names have played here, and you have to fill those shoes.”

Gunsbury and Mondzac picked a variety of works that they were either already familiar with or passionate about learning—Mario Castelnuovo-Tedesco’s Sonatina for Flute and Guitar and Robert Beaser’s “Cindy” from "Mountain Songs"—and spent the months between the summer and November getting every bit of their performance down pat, from the technical to the visual.

“We were always very aware of how we were looking. Professor Jennings encouraged us to be very communicative with each other, and I think that came out,” Gunsbury explains. “The interplay with Max was very comfortable by that point because we had time to form that relationship.” 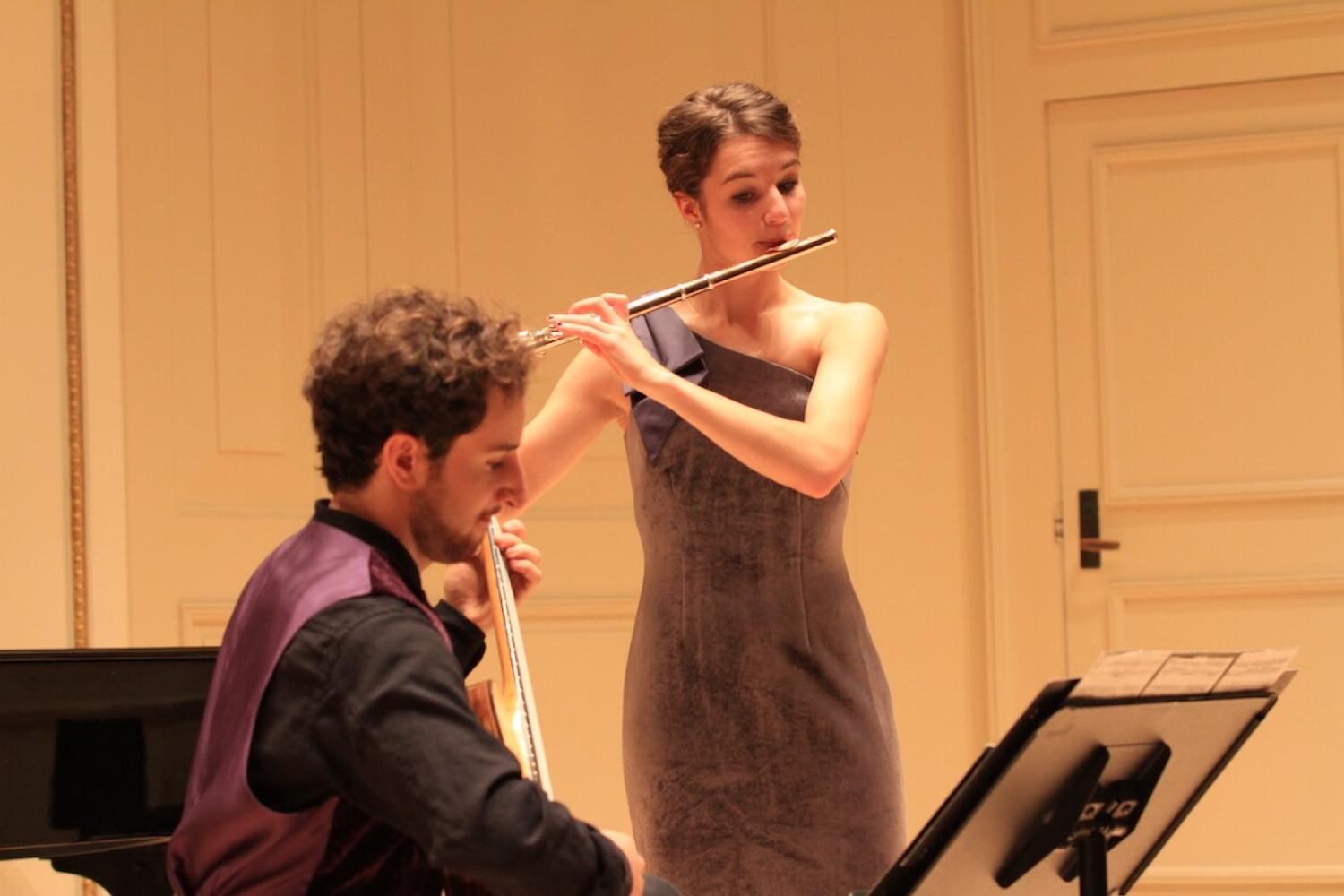 Closing out in style

Unlike Gunsbury and Baker, Jonathan Morris took the stage as a solo act for CU at Carnegie, leaving the audience speechless as he brought Ravel’s “Ondine” from "Gaspard de la nuit" and the Chopin “Winter Wind” étude to life on the Weill Hall Steinway.

“The ‘Ondine’ is beautiful and lyrical, and the étude is a bit more virtuosic, which I thought worked well for Carnegie Hall,” Morris says.

Morris grew up in Ireland and came to the U.S. three years ago to get his doctorate from CU Boulder. He graduated this May, and says he never imagined the apex of his studies would land him in the most famous concert venue in the world.

“I definitely never thought I’d ever perform at Carnegie Hall, of course I always hoped I would. I feel very lucky that I got to do it while I was here!” 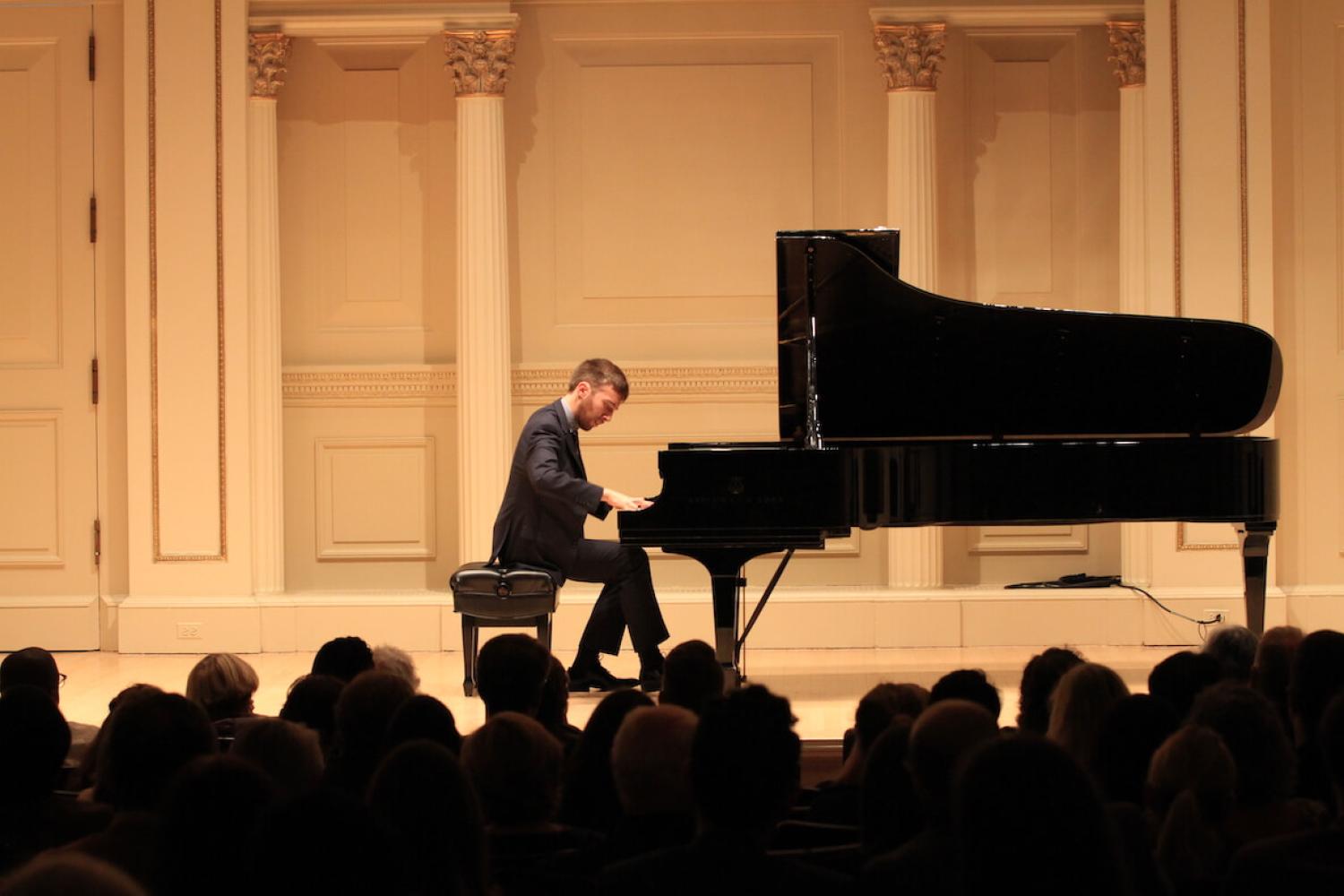 At the end of a magical night, Morris, Baker, Gunsbury and the other performers—Max Mondzac, the Ajax, Daniel Silver, Kristin Weber, Barbara Noyes, Andrew Brown and composer Conor Brown—all made the most of an opportunity that few at this stage of their careers are afforded. Looking back, the performers say the concert means something special—yet different—to each of them.

For Baker—an international accordion performer since age 6—the evening was a culmination of hard work and a love of music. “It’s a result of the steps I was already taking to become a good musician. It wasn’t the end goal, but that almost makes it feel more special to me.”

Morris, who studied music at Guildhall School of Music in London, hopes Carnegie Hall is just the beginning. “It’s a big confidence boost. It gives me the encouragement to believe that I can play at the Barbican or Royal Albert Hall, which are on my bucket list.”

And Gunsbury—who nearly stopped playing the flute in middle school—sees nothing but open doors ahead for her and her fellow CU at Carnegie musicians. “Carnegie Hall was always one of my loftiest dreams—it was never something I thought would actually come true.

“After the concert, [Senior Instructor of Oboe] Peter Cooper told Max and me, ‘You’ve played in Carnegie Hall, now you can play anywhere.’ And that’s kind of how I feel. I’m so grateful to have had the opportunity.”

See more from CU at Carnegie 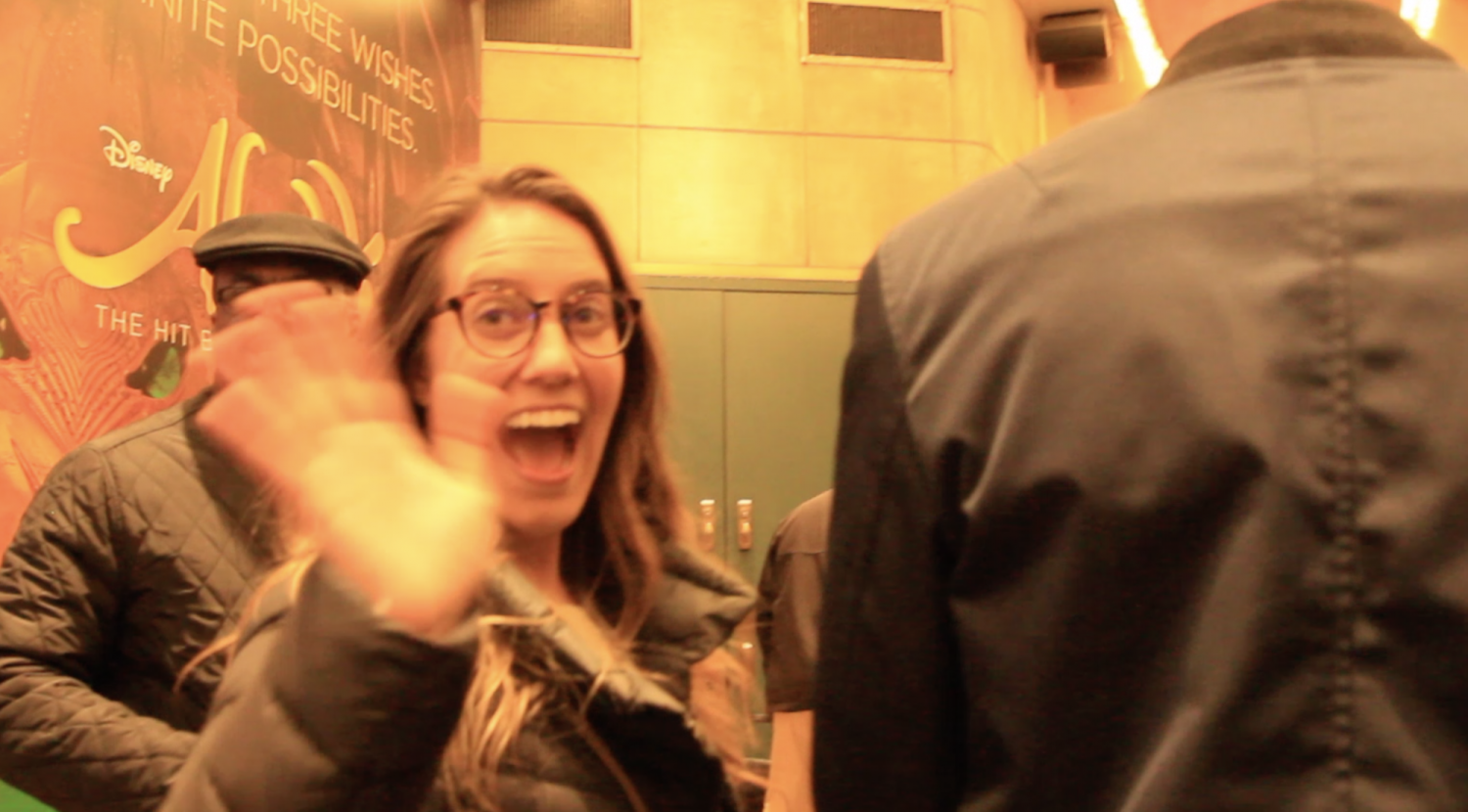 Video: CU at Carnegie in a New York minute

It was a whirlwind couple of days for nine College of Music students, three alumni and one faculty member as Colorado took over Carnegie Hall's Weill Recital Hall on Nov. 5, 2018. The second CU at Carnegie showcase concert was the culmination of months of work and about 36 hours of Big Apple-sized excitement, as flutist Claire Gunsbury, vocalist and accordionist Alicia Baker and pianist Jonathan Morris show us in this behind-the-scenes look at their trip. 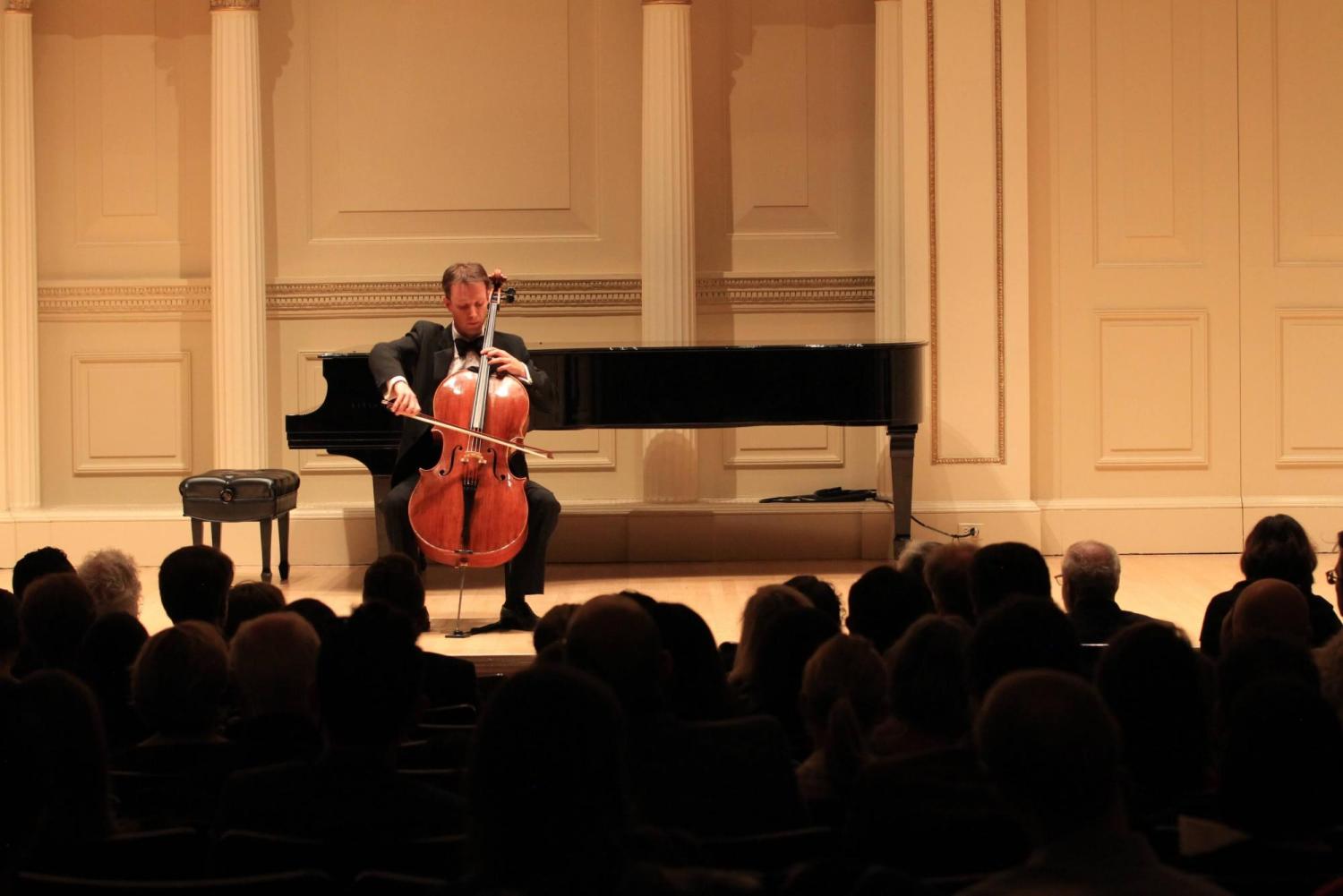 Relive the magical moments of CU at Carnegie with photos from dress rehearsal and the performance in Weill Recital Hall. 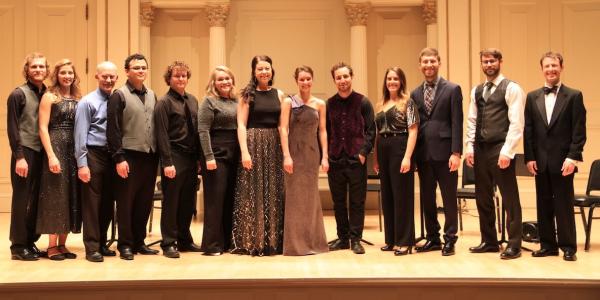 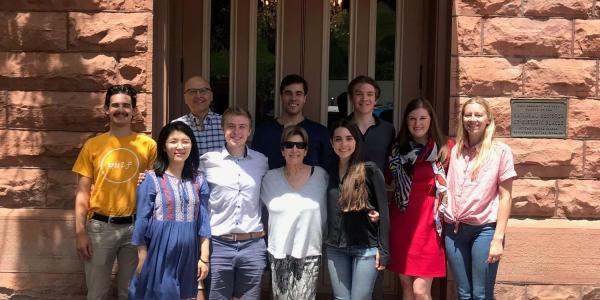 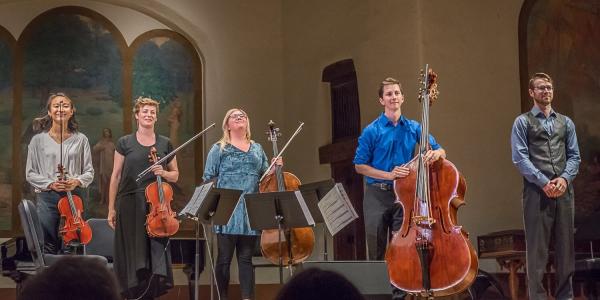 College represented at Creative Dialogue hosted by Sibelius Academy. END_OF_DOCUMENT_TOKEN_TO_BE_REPLACED
Back to Colorado Music Magazine: Students
Return to the top of the page