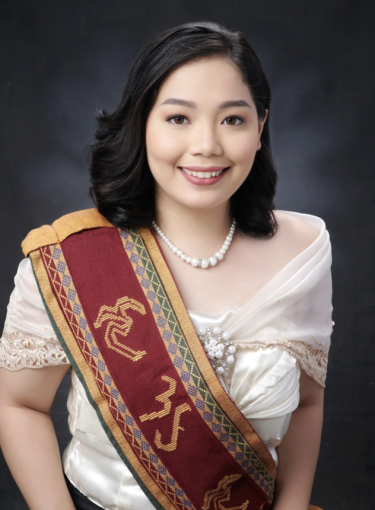 In this photo, the sash worn by Torres is a handwoven Sablay, which is used instead of a traditional cap and toga. The design and pattern come from various indigenous groups from the Philippines, and the text is written in Baybayin, a pre-colonial script. Learn more.

Samantha Torres is a first-year international graduate student pursuing a master’s in music education at the College of Music. She recently shared with us how her culture influenced her to pursue a career in music education, the challenges she’s overcoming, and why our Boulder College of Music is the best institution to support her in achieving her goal of becoming a music educator, and her mission to serve as an advocate for diversity, equity and inclusion in the classroom … and beyond.

Why did you choose to attend CU Boulder and the College of Music?
Torres: CU Boulder is a well-known institution and has an amazing faculty. When I researched the music education program, I discovered that it offered a flexibility that would be difficult to find elsewhere. I loved the idea of having freedom to build your specialization based on your interests. It was important to me to have that room to customize my own curriculum to fit my needs.

And once I received the details of a generous offer of support, the College of Music was an obvious choice. The beautiful campus was another bonus!

What inspired your academic and real-world career, thus far, in music education?
​Torres: My discovery for my love for music and teaching can’t be traced back to one single moment. Rather than one defining moment, my desire to be an effective teacher for all students was built through multiple experiences and encounters I’ve had over the years. Much like many Filipinos, I grew up surrounded by music. It’s embedded deeply in our culture. I’ve been singing and playing instruments for as long as I can remember. However, part of that culture was also believing in the idea that music was only a hobby. It never occurred to me that pursuing it professionally was even an option until I applied for college.

When I decided that I wanted to study music education, it was because of that exposure to music at an early age, as well as my various teaching experiences up to that point. Unfortunately, my parents were firmly against it. They believed that teaching was not a practical choice, let alone teaching music. Despite that, I was determined to follow through with my decision, so they eventually allowed me to, but it came with a cost.

Throughout my years of undergraduate studies, I was constantly being told that I was making the wrong choice. The elation I felt upon being accepted into the University of the Philippines Diliman was short-lived. This eventually took its toll, and I began to doubt my decision. I still attended my classes, performed gigs for events and on TV, taught applied lessons and participated in various musical activities … and yet, I felt lost.

It was when I began taking my major courses specific to music education majors that I reached a turning point. Once I started peer teaching and student teaching, I realized I made the perfect choice for me all along. Being in the classroom in front of kids was one of the most enjoyable and fulfilling things I’ve ever experienced. Receiving positive feedback from my professors also helped reaffirm my decision to pursue teaching.

In my junior year, I joined a student organization that advocated for children with special needs. We would organize countless events such as sports days, art exhibitions and musical performances for children with all kinds of exceptionalities. This inspired me to organize my own workshop for children with autism spectrum disorder (ASD) for my capstone project. Along the way, I discovered the need to advocate for diversity, equity and inclusion in the classroom. For me, this means accepting students and working with their differences. I learned that one of the most important parts of being a teacher is making sure students feel valued and respected. Once I began teaching full-time, my experiences in and out of the classroom continued to inspire me to continue to be an advocate, and to pursue honor and excellence.

What has your experience been at the College of Music, so far?
​Torres: It’s been surreal, but not without difficulties. I’m enjoying the challenging classes I’ve been taking so far. All my esteemed professors have continuously been inspiring me to push myself as much as I can. And that’s only in the classroom.

Outside the classroom, the number of resources that the university offers are unbelievable. The most helpful resources for me so far have been the Graduate School’s Peer Mentoring Program, CUServes and Counseling + Psychiatric Services (CAPS). As an international student, it’s understandable that I would be encountering some difficulties. The culture shock, the financial struggles, feeling isolated due to feeling different and actually seeing just how different I am wherever I go. It’s my first time being this far away from home. While I was anticipating the culture shock, I did not expect that I would constantly carry with me the weight of loneliness from just being in a foreign place, and not meeting even a single person who’s also from my home country.

However, the resources I mentioned have made this burden lighter, little by little, every single day. The Graduate School paired me with a mentor who is also from Asia. While she is not from the same country, just having someone who has been through a similar experience, guiding me through the little things I wasn’t prepared for, has been helpful.

CUServes’ Buff Pantry, which provides basic needs like food resources, and the various mental health resources that CAPS provides, allows me to make sure that I am still taking care of myself.

Of course, the relationships I’m building with my peers in the music education department, my fellow Teaching Assistants and my colleagues at the Advancement Team of the College of Music, all contribute to the improvement of my overall well-being while I’m here, as well.

What’s your advice for aspiring music educators?
Torres: Always pursue growth. Allow yourself to make mistakes, own up to them, learn from them. No matter where you are in your career, there will always be opportunities for growth. Whether you’re a prospective or current student or already handling your own classroom, each day is a valuable part of your journey … make the most of it.

As for me—while it is true that I have grown due to the relationships I’ve had with my peers, colleagues, mentors and professors—at the end of the day, I know with conviction that with every step and even misstep, I continue to learn. All the decisions I’ve made thus far have molded me into the person I am today, a music educator. And in the future, hopefully a great one.

Related: International college enrollment ticks back up after pandemic (The Washington Post)

Assistant Professor of Composition Annika Socolofsky blends the realms of art and science through the Instrument Design Lab (IDL). The course offers a science-based context to instrumentation, sound and musical creation, giving College of Music students a foundation in the science of music. END_OF_DOCUMENT_TOKEN_TO_BE_REPLACED

It was a busy fall for the American Music Research Center (AMRC)! One of the... END_OF_DOCUMENT_TOKEN_TO_BE_REPLACED

Friends, My heart is heavy. Associate Professor of Violin Charles (Chas) Wetherbee passed away on... END_OF_DOCUMENT_TOKEN_TO_BE_REPLACED
Return to the top of the page