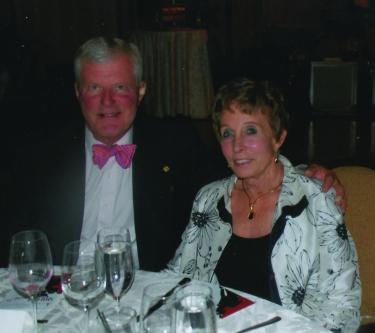 Doree Hickman and her late husband Jerry started attending classical music concerts in Boulder because of a love of music and for the social connections.

Before they knew it, they had gained a whole new family.

“It’s been the relationships. They’ve been amazing.”

Hickman, a longtime member of the College of Music advisory board, says it was that sense of community that led her to join the call for capital gifts to the music+ campaign in 2018. In her husband’s memory, she named the Hickman Piano Faculty Studio.

“I’d been on the advisory board for a while, and for the past 10 years, facilities have always come up as needing improvement. So this seemed like the perfect way to help a good cause.”

CU Boulder graduate Hickman has nurtured a love of music all her life, but though she grew up playing piano and saxophone, it wasn’t music that brought her to the university after she graduated from high school in Mount Morris, Illinois.

When Doree and Jerry got married, they moved to the East Coast for a few years, first to Philadelphia, where she worked in a hospital lab and he had a hospital internship, and later to Rhode Island while Jerry served in the Navy. Their son, Grant, was born in 1967 in Newport; a couple of years later, the family returned to Colorado, where Jerry eventually settled in as a practitioner at Table Mesa Family Medicine for 43 years.

Starting in the 1980s, the Hickmans began frequenting the Colorado Music Festival and other local music gatherings, eventually meeting the friends who would encourage them to attend Takács Quartet concerts and participate in the College of Music’s Adopt-a-Student Program. They also kicked off a passion project that led Hickman to a whole new career.

“We built our house from the ground up in Boulder, working on it every day,” she says. “We laid 11,000 pavers and did everything right down to the painting. We got the house we wanted, and I ended up going into kitchen design, which I did for more than 30 years.”

Hickman says Boulder has changed a lot since the family bought their land and built their home for a combined $150,000, but one thing has remained a constant for her.

“It goes back to the relationships. After we started going to CMF, Jerry served on the board for a few years, and then I joined in the ‘90s. We loved the social aspect of attending concerts and pre-concert picnics with those folks.”

Hickman’s son Grant still lives in the Boulder area with his family. But thanks to her musical connections, she says she’s gained two more children, so to speak.

“[Pianist] Orion Weiss came and stayed with us when he was a guest artist at the Conference on World Affairs years ago. He’s come back a couple of times and we developed a close relationship. Now he calls me his Colorado mom,” she laughs.

“The other was [singer-songwriter] Gooding,” Hickman continues. “We housed him as a guest artist and got close with him, too. In fact, I just got an email from him this morning.”

And nearly 30 years after joining the College of Music’s extended family, Hickman says her friends here were a lifeline for her when Jerry passed away in 2018.

“Everyone was so amazing and supportive,” she recalls. “They knew it was hard for me to come back and go to concerts, but they were right there, sitting with me. So I stayed involved because of them.

“The College of Music did a memorial celebration concert in Grusin. It was all music and stories about Jerry. I couldn’t have asked for better.”

So it’s only fitting, she says, to return that kindness while she can.

“After Jerry passed away, I didn’t want to put any money in the stock market or real estate, and we had already left money to the college and CU in our estate planning. So when this opportunity came around to raise the money for a new building, I thought there was no better place for that money to go.

“Music is good for the soul. It lifts you and makes you feel good. It’s an important part of life. The same goes for the arts in general. We’ve always enjoyed it. And it was an enjoyment we shared with each other and with so many other people in our lives.”

Curiosity drives Lydia Wagenknecht, a PhD candidate in ethnomusicology and recent recipient of a Fulbright Research Award. “I care that my research will help us understand something in a more broad-based way that we didn’t understand before,” she says. END_OF_DOCUMENT_TOKEN_TO_BE_REPLACED

We’re so excited to welcome alumnus Damani Phillips back to campus this week and to present him the College of Music’s 2022 Distinguished Alumnus Award at our commencement ceremony on May 5! “The versatile training provided by CU has been the cornerstone of my success to date, and has enabled me to do and be many things well beyond typical expectations,” he says. Meet Phillips and discover his powerful advice to graduating Music Buffs. END_OF_DOCUMENT_TOKEN_TO_BE_REPLACED

On May 5, we look forward to welcoming back Judith Glyde, formerly professor of cello and chamber music at the College of Music and chair of our string faculty. Since retiring in 2014 to live in New York City, the professor emerita she has been active with the college’s alumni community there, offering tremendous support to Forever Buffs who are now living and working in the city. END_OF_DOCUMENT_TOKEN_TO_BE_REPLACED
Return to the top of the page