Wind Symphony to premiere piece about pandemic and social justice

Later this semester, the culmination of several months of work by several different people to put music to two of 2020’s biggest headlines will be coming to a streaming device near you.

It’s a long-distance journey in artistic creation that started back in June, and one whose magnitude and potential have not been lost on the players involved.

Music for the moment

In the spring, as Director of Bands Donald McKinney planned and programmed for a most unusual fall semester of music making, he knew there were events happening in the world that he and his colleagues could not ignore.

“Our original discussion centered around creating a piece of solace that would allow our students to deal with the isolation of COVID. After the murder of George Floyd, I felt like there needed to be a larger goal than just COVID,” McKinney recalls.

The only trouble was, the existing repertoire that spoke to this moment in time—one shaped by the COVID-19 pandemic and the movement for racial justice—didn’t really exist. McKinney saw an opportunity. So did longtime College of Music advisory board member Jan Burton.

“Jan contacted me in early spring and wanted to commission a piece of music for the Wind Symphony,” McKinney explains. “I told her that our immediate need would be for music that could be performed with a smaller instrumentation. Jan suggested Conor Brown’s name.

“I knew about Conor’s work as a composition student. He is a wind player and I knew that he was familiar with our ensemble and would create an amazing piece of art.”

“I am a mission-based donor,” Burton says. “I give money when I see a purpose that I relate to. When the pandemic came about, I was worried about musicians and how they would perform with others. But I also wanted to support a composer, so to be able to commission a piece from a Colorado composer was a positive as well.”

Brown, pictured above at left, who received a master’s degree from the College of Music in 2018 and was part of the college’s CU at Carnegie concert in 2018, was up for the challenge. But as a White composer, he knew that in order to do this important piece justice, he needed a different perspective.

“Frankly, as a White person, for me to address systemic racism through music without input from anyone that racism actually targets would mean I am just part of the problem rather than the solution,” Brown says. “Working with a collaborator who understands racism in a way I simply can’t felt like the right way to engage with this issue.

“Importantly, I absolutely love Derrick’s music: When I first heard his compositions years ago, it was immediately obvious to me that we are musical ‘kindred spirits.’”

Derrick Spiva (above right) is an American composer with Ghanaian, Nigerian, British, Irish and Native American ancestry. He often incorporates non-Western music into his compositions. He and Brown met when Spiva curated a concert for the LA Chamber Orchestra and after a successful collaboration there, Brown brought him into the fold.

“We wanted to make sure everything that was going on got addressed, so I reached out to Derrick to start that discussion,” he says.

“Any collaboration, through art or otherwise, that conveys the state of affairs in this country could always benefit from including a diverse set of voices,” Spiva says. “It is part of the identity of the country. Simply, the United States is not a monolithic country, and it never has been. It’s always been a pluralistic place and collaborations do a great service to show that.” 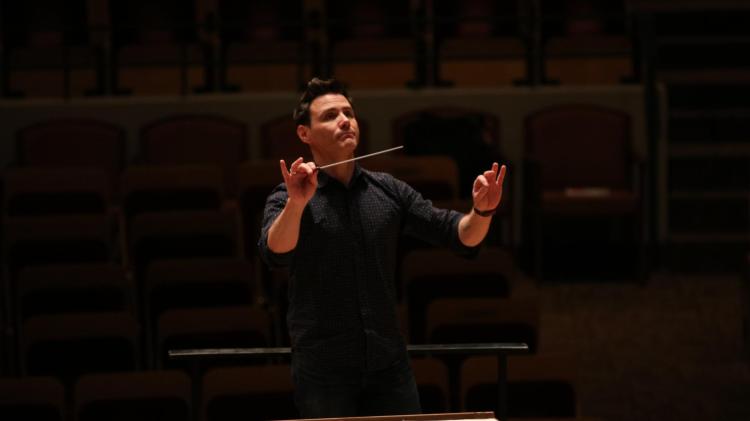 From a distance—Spiva is in LA and Brown is in the Boulder area—the duo began work on a piece in multiple movements, each one addressing through music either the pandemic or the racial justice movement. Though both are familiar with collaborative composing, the safer-at-home conditions made for a brand new process with its own difficulties and rewards.

“The most collaborative part has been coming up with the general programmatic tone to the piece,” Spiva says. “It has to convey the human experience, as it relates to this moment, and the fact that this moment has occurred before.”

“It’s been more conceptual than writing different parts and putting them together,” Brown adds. “I’ve personally also been learning more about the history of policing in this country, thanks to some recommendations from Derrick as we’ve started putting our ideas together. I view Derrick as an inspiration and as a mentor and it’s been so fulfilling to work with him on this project.”

Musically, Spiva says the work itself must strike a balance between hopefulness and division. “I want to convey the tension that’s involved in our community, but I don’t want to do it in a way that’s just another source of stress for the listener. There’s already enough dissonance going on as it is. So it’s been about balancing the dissonance in the music so that it’s realistic and hopeful in the same breath.”

Instrumentation, as a matter of course, has been its own challenge for the composers. Brown says the nature of a socially distanced rehearsal and performance has meant a shift in style for both him and Spiva.

“Each movement will be performed by a small group,” Brown says. “We’ve had to cut back from initial plans for the instrumentation because cases have been rising, and that’s put even more pressure on musicians to distance and take other precautionary measures.

“We’re both into rhythm, especially multiple rhythms lining up in complex ways, and it’s hard to do that when performers are spread out or isolated. They can’t play off of body language or hear as well across the ensemble. So we’ve had to adapt to that as well.”

Brown and Spiva hope that all of those elements—instrumentation, rhythm, tonality and themes—come together in a heartfelt musical take on the social change occurring around the world. But it is also a call to action.

“The interesting thing about COVID is that it wiped away all the other distractions in our lives when George Floyd was murdered,” Spiva says. “You couldn’t go watch a basketball game or go to a movie theater. There was nothing anyone could do but to confront the monster that’s always been there: that people are being treated differently.

“Relating it back to music, we have an opportunity to continue the conversation so that the past isn’t repeated on loop, continually inflicting pain on people. The more we can articulate that through music, the more impactful the piece can be to the players and the audience.”

And at a time of so much disruption and uncertainty, perhaps the piece can provide some solace as well.

“I think it’s important that we bring that to these musicians who aren’t able to really be musicians right now,” Brown says. “I haven’t performed live as a clarinetist since March. I hope this is a way to help this community of musicians come together through music—to feel like a community again.”

Adds McKinney, “The collaboration between Conor, Derrick and Jan has been a convergence of energy that demonstrates the incredible power of music, community and the impact of our donors.”

At the time of this writing, “Code Switch Mixtape” is intended to premiere during a Wind Symphony streamed performance later this year.

Curiosity drives Lydia Wagenknecht, a PhD candidate in ethnomusicology and recent recipient of a Fulbright Research Award. “I care that my research will help us understand something in a more broad-based way that we didn’t understand before,” she says. END_OF_DOCUMENT_TOKEN_TO_BE_REPLACED

We’re so excited to welcome alumnus Damani Phillips back to campus this week and to present him the College of Music’s 2022 Distinguished Alumnus Award at our commencement ceremony on May 5! “The versatile training provided by CU has been the cornerstone of my success to date, and has enabled me to do and be many things well beyond typical expectations,” he says. Meet Phillips and discover his powerful advice to graduating Music Buffs. END_OF_DOCUMENT_TOKEN_TO_BE_REPLACED

On May 5, we look forward to welcoming back Judith Glyde, formerly professor of cello and chamber music at the College of Music and chair of our string faculty. Since retiring in 2014 to live in New York City, the professor emerita she has been active with the college’s alumni community there, offering tremendous support to Forever Buffs who are now living and working in the city. END_OF_DOCUMENT_TOKEN_TO_BE_REPLACED
Return to the top of the page