Born in the San Francisco Bay Area and educated at the University of California-Berkeley and the University of Michigan—including a law degree and a doctorate in public health—Patricia Butler eventually made her way to Colorado in 1977, following a seven-year stint in Los Angeles.

“About 20 years ago, I got involved with Adopt-a-Student at the CU Boulder College of Music,” said Butler, who worked at Colorado’s Department of Public Health and Environment for a couple years before transitioning to Boulder’s City Attorney’s Office, ultimately striking out on her own as a health policy consultant. “I don’t have children of my own, so Adopt-a-Student was a wonderful opportunity to get to know young people—especially those studying music, which I consider to be a noble endeavor. 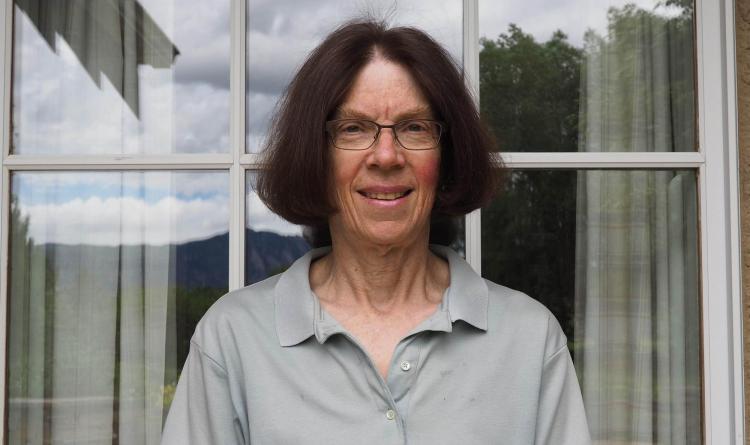 “I’ve adopted several undergraduates and some graduate students—it’s personally very fulfilling for me. I’ve stayed in touch with some of them, and I’m grateful to the College of Music for establishing those connections.”

A deepening passion for music

Since 2000, Butler has been a regular College of Music donor—including a gift of $25K for a practice room named in honor of the Takács Quartet’s second violinist, Károly Schranz.

“Watching Károly play inspired me to pick up the violin and play again,” explained Butler who stopped playing when she was 16, only to pick up her violin and bow again at age 55. “I was never really good at it … and I’m still not. But I practice more now than when I was a kid!”

As decades-long subscribers to Takács concerts, Butler and her husband like to sit in the front row, which presents the opportunity to watch the interactions of the quartet—and their fingers!—up close.

“For me, Károly was the one person who always seemed to be having the most fun—I felt it from his facial expressions, his whole body and the way he related to everybody in the quartet. He would often smile—unless the music was serious, of course. And I thought, ‘If I can have that much fun, too, I should get back to music.’

“I really credit Károly for inspiring me—and I know his students love him as a teacher, too. He’s a wonderful, witty person whom I respect.”

So Butler had her German-made childhood violin repaired and ended up studying with Debbie Holland of the Boulder Philharmonic for some 17 years. From there, she took her deepening passion for music and violin-playing to Annamaria Karacson, Károly’s wife and the Phil’s assistant concertmaster. “Both Debbie and Annamaria are great teachers, very supportive,” said Butler. And she’s never looked back, now also playing chamber music with friends—and enjoying the resulting camaraderie and friendships.

A source of pride and belonging

“We’re very fortunate in Boulder to have the College of Music and the Boulder Phil,” continued Butler, now retired. “Even before my husband and I began attending Takács concerts, we enjoyed the CU Symphony and faculty recitals—all told, an incredible resource in our own backyard, including many free performances.

“I’m proud that our community has the College of Music and I’m happy to support it in any way I can.”

Indeed, Butler said she always felt that volunteer service and giving back to her community were a part of her DNA. “If I’m in a position to provide support, then I’m happy to try to make a difference,” she added. “And I’m thrilled to see the college continue to be recognized for the quality of its faculty and students.”

She concluded, “I have a growing appreciation for the way one can express emotions through music—not only what’s written in the score, but how you play something.

“I believe that whatever you commit to and make a part of your life reinforces discipline, growth and a sense of belonging.”

As part of the College of Music’s Summer Session, the CU Boulder Musicians’ Wellness Program (MWP) will sponsor the Alexander Technique Summer Course via Zoom, July 5-8, 9 a.m. to noon. An additional day, July 9, provides educators the option to receive graduate credit for the five-day course. END_OF_DOCUMENT_TOKEN_TO_BE_REPLACED

In this edition of Dean's Downbeat, learn how the College of Music has channeled change into progress; the work of the college's DEI task forces and how to contribute your input; what we're looking forward to this Fall; and our excitement for a new chapter of in-person music-making. (Dean's Downbeat will resume at the beginning of Fall Semester 2021.) END_OF_DOCUMENT_TOKEN_TO_BE_REPLACED

From opera to heavy metal to conducting to wellness, the College of Music is poised to teach and support diverse creative interests during Summer Session. END_OF_DOCUMENT_TOKEN_TO_BE_REPLACED
Return to the top of the page