Carnegie Hall’s Lullaby Project comes to the College of Music

Do you remember the songs that had the most impact on you as a young child? While everyone likely has a favorite, it probably wasn’t a song that had your own name and story in it. The Lullaby Project launched by Carnegie Hall pairs new parents with professional musicians to create a customized lullaby for their new baby in a process that forms strong parent-child bonds and fosters early childhood development.

How did the project get its start? 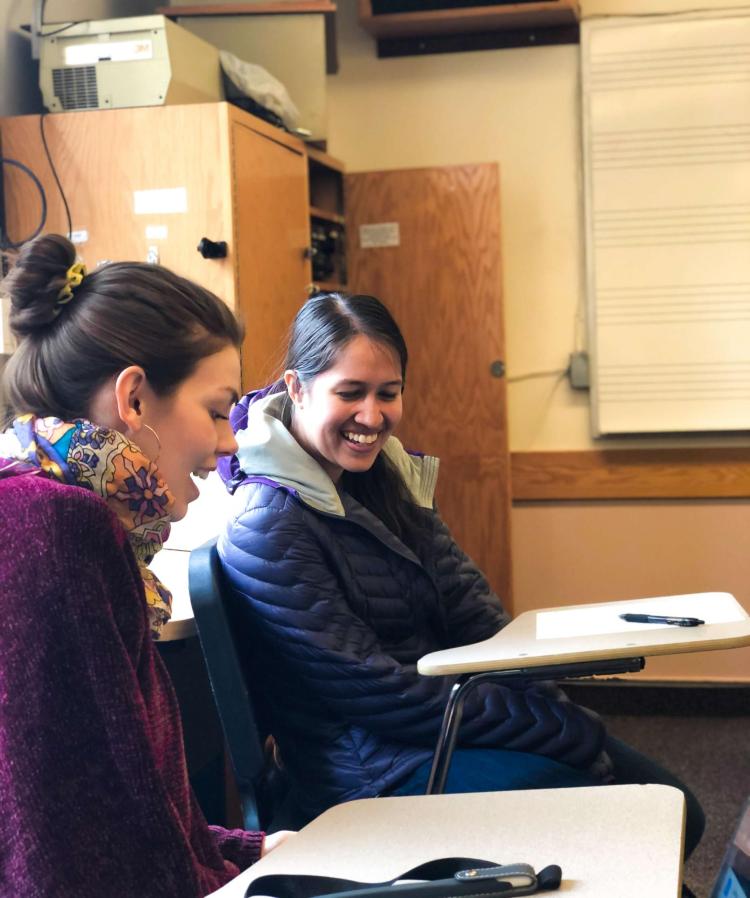 As a teaching artist and composer-in-residence at Carnegie Hall and professor at the Juilliard School, Tom Cabaniss helped initiate the Lullaby Project after some time as a teaching artist at the Jacobi Medical Center in the Bronx. “My work especially centers around musical creativity, and so I did a workshop with a group of kids who had chronic HIV. It was a 12-week workshop where we met every Wednesday afternoon and wrote songs together,” Cabaniss explains. “At the end of that, we gave a concert of the new pieces that the kids had written in collaboration with a group of professional musicians.”

Among the audience members were professionals from the OB/GYN department who then approached Cabaniss about partnering on a songwriting workshop for a host of pregnant teens who were encountering difficulty attaching to their children.

The wild success of the pilot project among that group of young mothers lit the fuse of what has now grown to encompass 300 families in New York City (who connected with the program from healthcare settings and homeless shelters to foster care, high schools and correctional facilities) and an additional 300 families with the Lullaby Project’s national and international partner organizations.

“It’s a form that has existed throughout human history,” Cabaniss says. “Various people have done all kinds of collaborative lullaby writing in the past. But we wanted to serve as a hub.”

He also points out that studies in neuroscience in the last 40 to 50 years have already shown the positive benefits of lullabies, but they haven’t yet been effectively integrated into practice. “We know it's important to play with, sing to and talk to our children when they're very young. But we haven't necessarily done the structural things to make that happen in ways that it should. It’s very important because young parents can feel very isolated and scared about taking on the task of raising children. It’s daunting.”

While the program was initially intended to help foster attachment and bonding between the parents—particularly the mother—and their child, Cabaniss noticed another intriguing benefit through the songwriting process.

“One of the greatest impacts of the program has more to do with young parents’ self esteem at a moment when they're trying to envision what it's going to be like to be a mother or a father,” Cabaniss says. “By constructing this song that is custom made for their child and often with their child's name in it, it's like a little bespoke piece. I think that boosts their ego and helps them feel better about themselves.”

Master’s student Grace Law, who will be serving as the Colorado Lullaby Project Coordinator as well as a teaching artist, is excited to see the pairings of the student teaching artists with the mothers.

“I'm really excited to see the lullabies actually get created,” Law says. “It’ll be interesting to have somebody who might not have a musical background bring their vision of a lullaby to life.”

How the College of Music fits in

The Lullaby Project team advocates for a personalized and peer-learning approach to creating the lullabies. “We don't prescribe any kind of method. The object here is to do collaborative songwriting with young parents and their families,” Cabaniss continues. “We have some values that are common like making recordings of the work so it gets documented and used. What we try to do is to inspire more than we dictate.”

That approach is what makes the College of Music a perfect partner for the Lullaby Project.

“From the initial conversations we've had, the big difference at the University of Colorado Boulder is that you have the potential of not only working with students, but also with faculty and staff members in a cross-generational and cross-experiential group,” Cabaniss explains. “We don't work that way at Carnegie, with professional teaching artists and musicians—so to have a university community is extraordinary and really cool.”

Students from the College of Music will be working together with families from Boulder Community Health and Children’s Hospital of Colorado in Aurora. They’ll also be partnering with the College of Music's Entrepreneurship Center for Music and the Reneé Crown Institute.

The roster of 10 teaching musicians includes students from all backgrounds, as well as artists who can empathize as parents themselves.

“We pretty much have every department covered in a way with some music education students, those with a heavy jazz background, people who are composition majors, and so on. They all have different styles that they can pull from,” Law explains. “When you create a lullaby, not every mom is going to want their lullaby to sound like a Beethoven serenade. We could have people who love death metal or hard rock or stuff like that—we have the flexibility for that, which I think is great.”

Law also hopes CU Boulder will be able to establish a lasting partnership with the Lullaby Project here in Colorado. “The long term goal is that the foundations of Boulder Community Health and Children's Hospital of Colorado will underwrite this project to create sustainable employment for graduate students and students who want to be involved,” she says.

All their hard work will culminate in a beautiful concert on May 9 in Grusin Music Hall. Open to the public, community members will learn more about the project and experience musicians and parents performing the pieces written for their children.

It was a busy fall for the American Music Research Center (AMRC)! One of the... END_OF_DOCUMENT_TOKEN_TO_BE_REPLACED

Friends, My heart is heavy. Associate Professor of Violin Charles (Chas) Wetherbee passed away on... END_OF_DOCUMENT_TOKEN_TO_BE_REPLACED

Longtime Associate Professor of Saxophone Tom Myer retired in May. As the year draws to a close, enjoy his insightful career reflections and advice … and discover what he’s up to now! END_OF_DOCUMENT_TOKEN_TO_BE_REPLACED
Return to the top of the page