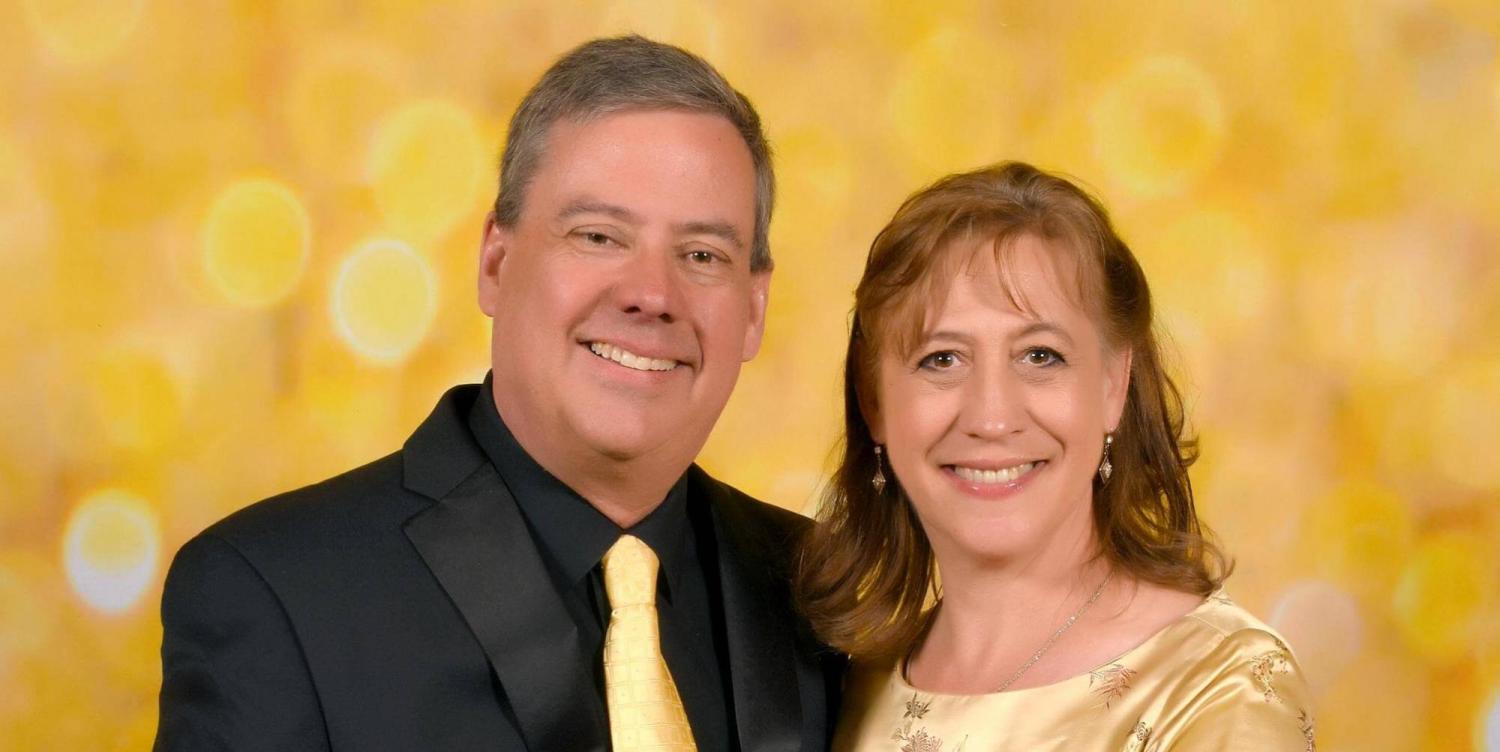 For the past 30 years or so, the Nelsons have quietly become one of the most important musical families in the Boulder-Denver area. Their involvement ranges from offering steadfast support of the College of Music and Golden Buffalo Marching Band, to helping create the CU Campus Orchestra, to providing performance opportunities to amateur musicians, to teaching music to Jefferson County youngsters, to bringing a musical eye and ear to the design of some of the region’s most well-known fine arts venues.

CU Boulder alumni Ben (BS’84, MS'88) and Pattie (BME’84, MME’08) Nelson have turned their mutual love of music into a decades-long passion project that has rippled throughout the community. But all that may never have happened if a teenage Pattie hadn’t asked her parents for a trombone for her birthday.

“Since my dad was a band director, we did everything with the band,” she says. “Even though I was a violinist, I asked for a trombone so I could be in marching band.”

The fortuitous gift led Pattie to join the marching band at Arvada West High School, where she and Ben met. Now—42 years later—Ben, a member of the College of Music Advisory Board, and Pattie, a recently retired music teacher, are part of the generous group of supporters who helped the college in its fundraising efforts by making a naming gift as part of the Imig Music Building renovation. 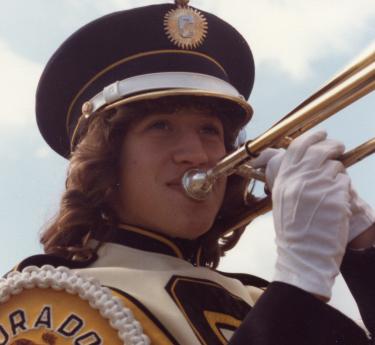 Both Ben and Pattie Nelson come from musical families. Pattie’s grandmother was a music major at Ball State University in Indiana—a rare vocational path for women in the early 20th century. Her father, Robert Hurrell, taught music at Jefferson County Schools for 34 years and is a member of the Colorado Music Educators’ Hall of Fame. Everyone in Pattie’s family plays an instrument: Her grandmother played piano, her grandfather played trumpet, her uncle plays baritone, her mother plays violin, her sister plays sax, her brother plays trombone, and Pattie herself plays violin. And her father, who recently turned 90, still plays trombone every day.

Ben can trace his musical lineage back to his grandmother in Sweden, who was the drummer in the family polka band. His mother played piano and while his father never played an instrument, he was always an avid fan and supporter. The Nelsons both credit their families with instilling a deep love of music, which they passed along to their daughters Emily and Andra, string bass and cello, respectively.

“My family has been in music for a long time,” Pattie says. “We still get together and play every year.”

After high school, Ben and Pattie both traveled up the road to attend CU Boulder for college. While Ben’s studies led him to the College of Engineering, he marched all four years in the trombone section of the Golden Buffalo Marching Band along with music education major Pattie. When they graduated in 1984, Pattie picked up the torch from her father—who was just retiring from teaching—and began teaching orchestras.

“I started out in Adams County District-12, then went to Jefferson County Schools for 26 years,” she explains. “At first I was teaching high school, but I started to see that the foundation wasn’t there for children who wanted to play music. So I switched and taught in elementary school so I could be there from the beginning.”

In 2007, while earning her master’s degree in music education from the College of Music, Pattie was named Colorado String Teacher of the Year.

Ben brought his love of music to engineering and design, where he’s now structural engineer and principal at Martin/Martin Consulting Engineers. He’s been part of the teams that designed the Ellie Caulkins Opera House and Buell Theatre at the Denver Performing Arts Complex, Parker Arts Center and the Black Box at the Arvada Center for the Arts and Humanities. He also worked on Walt Disney Concert Hall in Los Angeles.

“Music has helped me as a structural engineer,” Ben says. “I had that knowledge of performance venues and what’s needed in terms of acoustics. It makes me more valuable to my clients who hire me for my music background.” 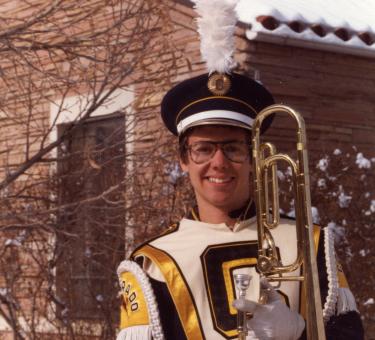 In what little spare time they’ve had, the Nelsons have helped lead the Jeffco Community Band, which Pattie’s father founded in 1984. Pattie took over direction of the band in 2001 and founded the Jeffco Community Orchestra in 2012. Ben plays trombone in the band and created the Jeffco Brass ensemble in 1999. It’s been just one more way Ben and Pattie have brought a love of music to the people around them.

“There are doctors, lawyers, pilots, many different kinds of backgrounds represented in the band,” Ben explains. “It’s become a tradition and a way to connect. We’ve had three generations of families all play side-by-side in the same group. We’ve had people as young as 18 and as old as 92 all together.”

Following in their parents’ footsteps are Ben and Pattie’s daughters Emily and Andra. Emily, their eldest, helped create the Campus Orchestra when she was an education student at CU Boulder.

“She wanted to play but there was no place for her because there wasn’t an orchestra for non-majors. They created the Campus Orchestra her freshman year,” Pattie says. “It was a club at first, for no credit, but eventually it became a class. Emily was instrumental in forming the group and recruiting for it.”

By the time Andra started school for biochemical engineering in 2010, the group had gotten so large that there was a waitlist. “We’re proud that both girls continued playing music throughout school as a break and a sense of community outside teaching or the engineering rigors,” Ben says. 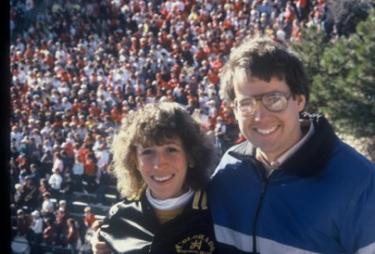 After decades of championing music in the community, Ben and Pattie Nelson’s story has come full circle with the expansion of Imig Music Building: Ben is the structural engineer for the addition, and now the couple will dedicate one of the nine new practice rooms for non-major students who need a spot to practice.

“We wanted students like me, or like our daughters, to have a place to use to practice,” Ben says.

In addition to their naming gift, the Nelsons are also converting a marching band scholarship they founded in 1988 to an endowment geared toward supporting senior student leaders in the Golden Buffalo Marching Band and the Campus Orchestra.

“The scholarship recognizes and rewards returning seniors who are providing that leadership backbone to the ensembles—major or non-major, ” Ben explains. “It was important to us to see students want to continue playing throughout their school years.”

Adds Pattie, “We want to encourage students to be lifelong musicians, not just musicians for a moment.”

Olivia Huizar Conner shares how her background inspires her to promote Diversity, Equity and Inclusion (DEI) in music. END_OF_DOCUMENT_TOKEN_TO_BE_REPLACED

Alumna Annie Booth shares how the College of Music continues to impact her career as an award-winning jazz pianist, band leader, composer/arranger and educator—and offers valuable career advice. END_OF_DOCUMENT_TOKEN_TO_BE_REPLACED
Return to the top of the page