Newly elected President Anoushka Divekar and President-elect Eva Aneshansley are thrilled to dive into the new academic year as the leaders of the Colorado Collegiate NAfME. The National Association for Music Education (NAfME) advocates at the local, state and national level for all things related to music education. As co-leaders and close friends, Divekar and Aneshansley believe that the group has a lot of unutilized potential.

Divekar got her start with NAfME as a freshman instrumental rep. As a sophomore, she went on to be president-elect, and then became acting president at the end of January in 2019. In that time, she’s begun instituting the changes she says are needed to foster a more welcoming and inclusive community among the Colorado NAfME members—an overarching goal for the two women.

“As president thus far I have sent monthly emails to the other heads of the Colorado school chapters with questions to ponder. I take note of what our collegiate chapter members want, what they’re curious about,” Divekar says. “I want to create an environment where Western Colorado University can ask CSU a question.”

The idea is close to both their hearts: It’s that ability of music education to build community that brought Divekar and Aneshansley to their chosen paths in the first place.

The magic of teachers

Gearing up for the year ahead, Divekar and Aneshansley also reflect back on their starts in music at an early age and dedication to music education while looking ahead to all of the exciting changes they want to implement in Colorado. 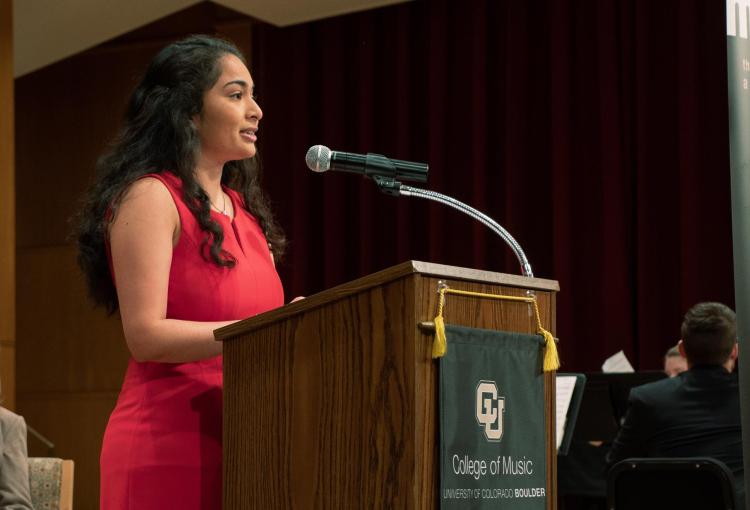 In particular, she remembered her junior high band director taking time out of her busy summer to give the band students free lessons. “I didn’t think of it as unusual. She was my teacher. But now I know that was incredible of her. I had amazing teacher influences and didn’t realize it wasn’t the norm,” she says.

Divekar credits her teachers with inspiring her to stick with music and develop a duty to pay it forward. In her sophomore year of high school, one of her teachers encouraged students to perform recitals in nursing homes, encouraging more musical interaction with communities who would appreciate it at no charge.

As she enters her senior year, Divekar is continuing to ponder what the future holds. “I will teach regardless, but I don’t know what that looks like, necessarily. It’s really important that a teacher go above and beyond. Teachers have a bigger job than standards and curriculum,” she explains. 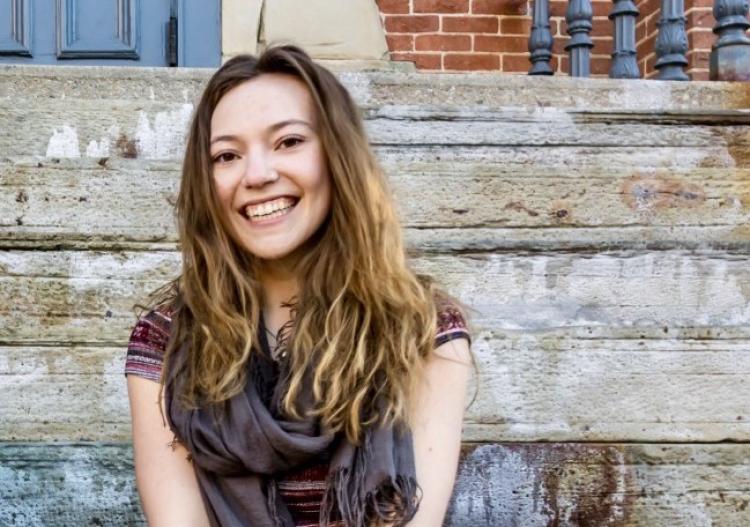 Hailing from the small town of Chelan, Washington, Aneshansley (right) is a rising senior double majoring in music education and environmental studies. Aneshansley is primarily a trumpet player focused on secondary instrumental education. Like Divekar, she started playing music at a young age, having played since fifth grade at the age of 10.

However, music wasn’t always Aneshansley’s plan. “I originally wanted to be a vet for most of high school. But then I got a lot more involved and performed in honor bands senior year. I did a senior project where I composed a piece of music and was able to rehearse and conduct it with a sixth grade band. That convinced me,” she explains.

Aneshansley’s passion for music education was further solidified as she went on to attend the CMEA conference while a student at the College of Music. “I have always loved teaching,” she says. “But just being around that environment where everyone is so passionate about education was inspiring, especially being so young.”

The importance of music education

As president-elect of the Colorado Collegiate NAfME Organization, Aneshansley will become acting president in January of 2020 after Divekar’s term ends at the next Colorado Music Education Association (CMEA) conference. Along with her involvement at the state level, she also holds the position of president of the CU Boulder chapter of NAfME.

“Colorado Collegiate NAfME has been focused on CMEA events, representing interests of different colleges and choosing events and speakers there that reflect what college level students are looking for. Anoushka and I are trying to make it much more than that because it has a lot of potential to be a great communication network,” Aneshansley explains.

The all-college meeting held at CMEA every January is a once-a-year meeting solely dedicated to 50 minutes of elections. The two friends are trying to streamline the process through Google Forms. Virtual elections would greatly aid in efficiency and allow for the annual meeting to be used for sharing ideas in a collaborative space.

“We can learn from each other. Someone might have an amazing analogy for how to teach something. We can learn from our peers, grad students, faculty and people within the community at Boulder and Denver schools,” Aneshansley says.

To accomplish their goal, Divekar and Aneshansley are in contact with other chapter presidents, especially with setting up workshops, such as a conducting clinic. Many of these efforts to change the program have been attempted in recent years, but none have successfully come to fruition. They are determined to break that cycle.

“We often focus on band, orchestra, choir—which isn’t a bad thing. We’re moving more toward the non-traditional in music education and bringing in more diversity and inclusion for students who don’t relate to music written by old, white male composers,” Aneshansley says.

This community they hope to create is one they believe also needs to be extended beyond a big city bubble. “Big schools are at an advantage—we get guest speakers and  resources. Small schools don’t have the same access to resources,” Divekar explains. “When you live in a small town, you’re bound by that lack of opportunity.”

On a more local level, Aneshansley and Divekar contribute to the CU Boulder chapter of NAfME. The chapter meets every other week to do a music education symposium and mock ensembles for members to play secondary instruments and sight read. They also invite guest speakers to deliver talks at monthly meetings that focus on a different topic each month. Inviting grad students to conduct workshops, students are able to learn about a wide variety of topics from their peers, like rehearsal techniques.

Divekar and Aneshansley are only just getting started, but they couldn’t be more excited to bring together the community of those passionate about music education.

“You can’t learn everything as a student in the classroom or teaching in the classroom,” Divekar says. “As teachers, you have to take initiative for as many opportunities as possible, and NAfME is one of them.”

Discovering and playing the music of composers who have been historically marginalized is a wonderful educational experience for all students, regardless of gender or ethnicity, says Professor of Piano Pedagogy Alejandro Cremaschi. END_OF_DOCUMENT_TOKEN_TO_BE_REPLACED

Assistant Professor of Composition and Pendulum New Music Director Annika Socolofsky discusses her recent incentive prize and how she perceives her role as a composer, performer and educator. END_OF_DOCUMENT_TOKEN_TO_BE_REPLACED
Return to the top of the page