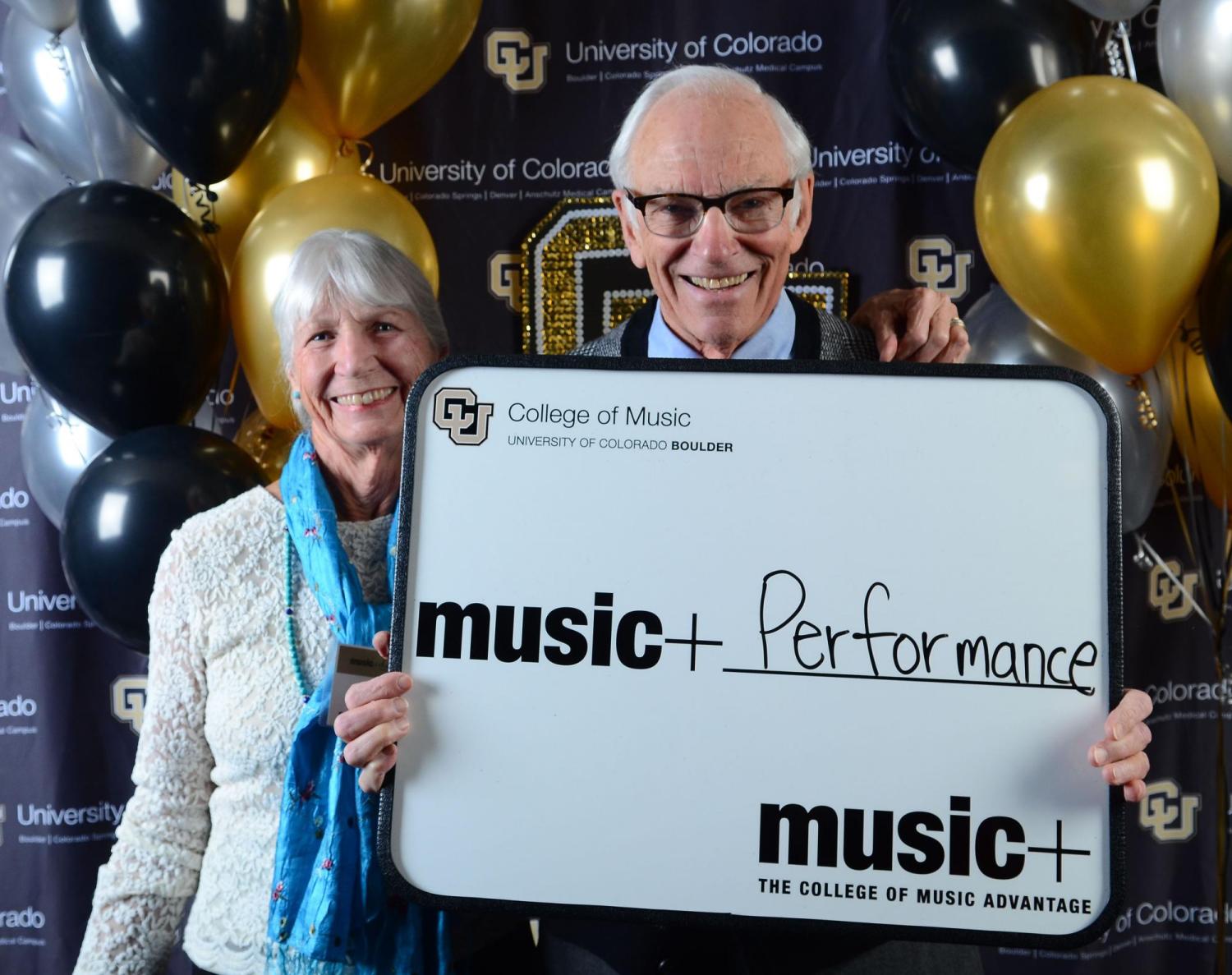 Since they came to Boulder in 1958, Chris and Margot Brauchli have accumulated a lifetime’s worth of memories together, many of them revolving around music.

“I made my living as a lawyer. But music happens to be an important part of our lives.”

The couple’s extracurricular activities make Chris’s sentiment clear: Chris is a member of the College of Music Advisory Board and the Boulder Philharmonic Symphony Board. Margot is a 25-year member of the Colorado Symphony Chorus and can sometimes be heard singing in other local choruses.

They helped found the Boulder County Arts Alliance (originally the Boulder Assembly on the Arts and Humanities), the Colorado Music Festival and the Boulder Bach Festival. And they collaborated with other parents in the area to start the Jarrow Montessori School—Colorado’s first school to follow that specialized teaching philosophy.

Through it all, the philanthropic leaders have been loyal supporters of the College of Music for more than 40 years. They participate in the Adopt-a-Student Program and support the Bruce Ekstrand Memorial Graduate Student Performance Competition. As the new Imig Music Building goes up, they will proudly make their latest contribution, a gift to name the Berger Choral Faculty Studio in honor of their friend, composer and former faculty member Jean Berger.

The Brauchlis’ love story began decades ago in Aspen, when both Chris and Margot had been students at the Aspen Music Festival and School.

“I was a singer and a music history major, and then I met this character in Aspen,” Margot recalls. “Chris was a student there the summer before me. He came back to visit a violinist friend—who happened to be my roommate.”

Chris, who grew up in Oklahoma, was studying violin at the time. “I was never a music major, but I took lessons throughout much of my life off and on until about five years ago. I’ve always had great teachers, and I still play chamber music a couple of times a week,” he says.

The couple married, spent two years in the Army, then moved to Boulder for law school. They immediately got involved in the music scene, with Margot joining the College of Music’s then-Festival Chorus, under former voice department chair Berton Coffin.

“At the time, the ensemble was students and community members, and Coffin passed that onto Lynn Whitten. But after Whitten retired, it was changed to an all-student group,” Margot explains. “So some of the people I had met in the Festival Chorus decided to keep singing together, and we formed a madrigal group called the St. Cecilia Singers.”

Chris also performed violin with an instrumental group to celebrate St. Cecilia’s Day in November each year. The St. Cecilia Singers became the choral ensemble to sing with the Boulder Bach Festival.

“Along with some musicians from outside the group, [music director/conductor Don Th. Jaeger and I] formed the Boulder Bach Festival in 1982,” Margot says. “It’s amazing that it’s still going to this day.”

Even by that time, the Brauchlis were no strangers to music festival administration. Along with former College of Music faculty member Giora Bernstein, the couple had founded the Colorado Music Festival in 1977.

“I was a lawyer, and Giora wanted me to help him get the festival going because I knew people,” Chris says. “I can still remember when Margot and I sat around one night with Giora and his wife, Carole, drinking wine and coming up with potential names for the festival.”

All the while, the world continued to turn outside of music for the Brauchlis. Chris served as president of the Boulder Bar Association from 1975 through 1976 and Colorado State Bar from 1989 through 1990. He wrote a humor column for the bar’s journal that, in its later form, found its way into several national newspapers. He still writes today, publishing political commentary on digital publications and his website The Human Race & Other Sports.

The apple, in that sense, didn’t fall far from the tree for Chris and Margot’s children. Two of them have had successful careers as journalists: Marcus served as managing editor of The Wall Street Journal and executive editor of The Washington Post. David worked as a news photographer for the Associated Press around the world, covering, among other places, the conflicts in the Balkans and Nelson Mandela’s election in South Africa. Their oldest son, Byron, studied art photography at CU Boulder and is now a professor at the University of Veracruz in Mexico. His work was recently shown at an international photo exhibition in Barcelona, Spain, where he also conducted workshops. Not to be outdone, their daughter Stephanie, who is also a lawyer, founded as partner and now runs the Wallaroo Hat Company.

With their children grown, the Brauchlis have thrown themselves into the Boulder arts community. “I bring in musicians to play in string quartets with me in our home,” Chris says. “About 15 assorted people come and play chamber music in varying combinations. Some of them are faculty at the college, others professional or amateur musicians in the area.”

And Chris has become something of a Faculty Tuesdays celebrity, known well for his famous “magic envelope” bit.

“I just tell people they can turn that envelope in their Faculty Tuesdays program into gold rather than trash by making a gift.”

Now, with this gift to name the Berger Choral Faculty Studio, the Brauchlis are bringing their involvement with the College of Music full circle.

“We’ve had many close friends on the faculty over the years, and Jean Berger was one of them,” Chris explains. “He was a prominent composer and a great friend, and we used to play a lot of violin sonatas together. This gift is to honor that friendship and the College of Music’s role in the Boulder music community.”

Read about other generous gifts as part of the College of Music capital campaign here.

Olivia Huizar Conner shares how her background inspires her to promote Diversity, Equity and Inclusion (DEI) in music. END_OF_DOCUMENT_TOKEN_TO_BE_REPLACED

Alumna Annie Booth shares how the College of Music continues to impact her career as an award-winning jazz pianist, band leader, composer/arranger and educator—and offers valuable career advice. END_OF_DOCUMENT_TOKEN_TO_BE_REPLACED
Return to the top of the page