Entertaining, teaching and moving the spirit: A glance into the Early Music Ensemble 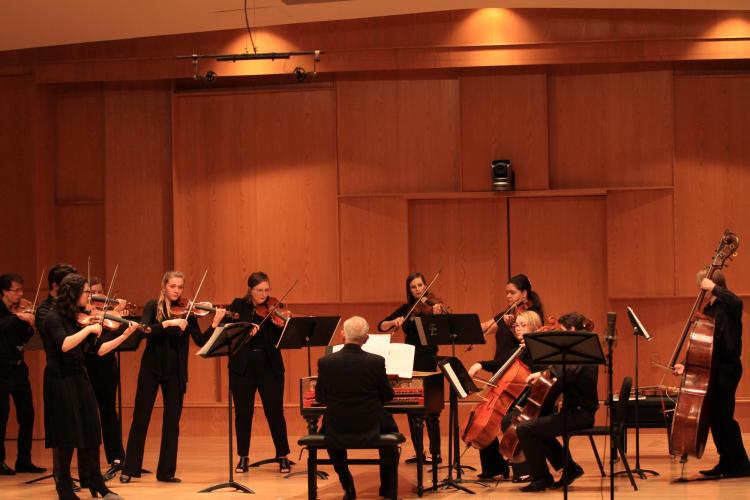 The Early Music Ensemble rehearsing for the April 5 performance.

“In the 17th and 18th century, music was understood as having three main functions: to entertain, to teach and to move the spirit,” says Professor of Harpsichord and Early Music Ensemble Director Robert Hill. Continuing this tradition, the Early Music Ensemble at the College of Music is centered around bringing the beauty of baroque music to students, faculty and audiences alike and showing its importance and relevance in music education. This will be on display at the upcoming concert on Friday, April 5, at 7:30 p.m. in Grusin Music Hall.

The few difference that set the ensemble apart from others is the musicians’ use of period bows with their modern instruments, as well as the technique in relation to the style of music they’re playing.

“Most of the music that we’ve been diving into is a lot about sound production and creating resonance with the instrument,” says ensemble member and graduate student Lindsie Katz. “It’s different than modern instruments, where the focus is around creating a projection for large, modern concert halls.

“Creating resonance and mimicking the music that was played back then requires us to move our instruments and bows differently, which isn’t what we’re used to but is a rewarding learning process,” says Katz.

A learning process that requires openness to new and unexpected things, such as improvisation.

“I love to experiment in an ensemble situation,” says Hill. “Early music is designed to do so. You can try out various theories of how the music functions through improvisation combined with the predictability of the pieces.”

This mix of predictability and improvisation can be seen at the upcoming concert, as the ensemble performs works from both the 17th and 18th centuries. The instrumental Early Music ensemble will pair up with a vocal ensemble to perform 17th-century Italian pieces, while the second half features Johann Sebastian Bach’s Sonata in E minor for Flute and Basso Continuo, as well as Bach’s only cantata for obbligato harpsichord and solo voice, featuring bass vocalist Zachary Bryant.

“As we started working, I realized each piece has different approaches in the physicality of the performance, which you only understand once you start to use the equipment,” says Katz. “It’s a whole-body experience, and when you really get it there’s a moment where it washes over you and it’s almost healing.”

The passion for early music runs deep in all members of the ensemble, resonating within each of them in a unique way.

“Pre-19th-century music has a depth and emotional spirit that I find utterly absorbing,” says Hill. “It makes me feel alive when I play the music, and really in touch with all parts of myself through this emotionally satisfying and intellectually challenging music.”

Witness the fervor of the Early Music Ensemble at their concert on Friday, April 5, 7:30 p.m. in Grusin Music Hall. Find more information at cupresents.org.

Curiosity drives Lydia Wagenknecht, a PhD candidate in ethnomusicology and recent recipient of a Fulbright Research Award. “I care that my research will help us understand something in a more broad-based way that we didn’t understand before,” she says. END_OF_DOCUMENT_TOKEN_TO_BE_REPLACED

We’re so excited to welcome alumnus Damani Phillips back to campus this week and to present him the College of Music’s 2022 Distinguished Alumnus Award at our commencement ceremony on May 5! “The versatile training provided by CU has been the cornerstone of my success to date, and has enabled me to do and be many things well beyond typical expectations,” he says. Meet Phillips and discover his powerful advice to graduating Music Buffs. END_OF_DOCUMENT_TOKEN_TO_BE_REPLACED

On May 5, we look forward to welcoming back Judith Glyde, formerly professor of cello and chamber music at the College of Music and chair of our string faculty. Since retiring in 2014 to live in New York City, the professor emerita she has been active with the college’s alumni community there, offering tremendous support to Forever Buffs who are now living and working in the city. END_OF_DOCUMENT_TOKEN_TO_BE_REPLACED
Return to the top of the page