A little jazz for everyone 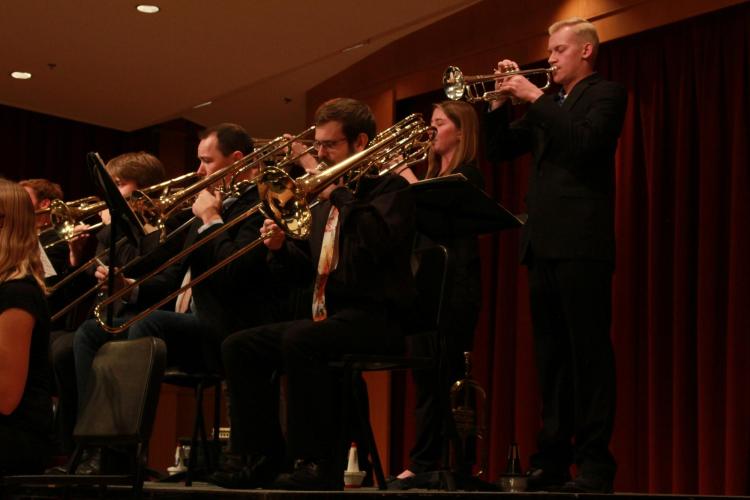 Concert Jazz Ensemble and Jazz II will be playing Thursday, Oct. 11 at 7:30 p.m.

“There’s really something for everyone in the upcoming Oct. 11 jazz concert,” says Concert Jazz Ensemble Director and Associate Professor of Jazz Studies Paul McKee. “When I’m programming music for the ensembles, I always try to find a range of music that’s entertaining to audience members who may not know much about jazz but will challenge people who regularly listen to it.”

From well-known pieces by established American composers to tunes by new composers, audience members can expect to hear a variety of jazz on Thursday, Oct. 11. “There’s traditional swing, contemporary pieces, some Latin pieces too. It’s a variety of tempos and styles that will create a wonderful evening of music,” says McKee.

The fall concert is exciting in particular, as returning students are working with new students to find their fit with one another in these various ensembles. “This year’s band is exceptional. They’ve come together really quickly and have formed a strong chemistry, so it’s exciting to hear them play like they’ve been at it forever,” says McKee. Because of this, McKee found pieces that feature each member at some point of the Concert Jazz Ensemble performance.

“It’s a great challenge to be part of a such a big group with your own individual sound,” says doctoral student and trumpeter Jonathan Saraga. Along with playing in the Concert Jazz Ensemble, Saraga and alto saxophone player Lexi Nomikos have the opportunity to direct Jazz Ensemble II and have been preparing the group of students for the performance while also preparing themselves.

“It’s been a pleasure to work with the young musicians,” says Saraga. “They don’t have to be in the Jazz II ensemble, but these talented students want to and they’re very enthusiastic about being part of the process.”

“They play really well together already, and for a group of 16 people that’s impressive,” says Nomikos. Nomikos and Saraga act as mentors to these students, guiding them through the nuances and details that will help them sound like a professional group. “It's exciting to get to that point where the band is able to pay attention to little details and dynamics to sound better as a group,” says Nomikos.

Some students that Saraga and Nomikos have been working with will have the opportunity to perform a solo piece in the upcoming concert, like junior jazz piano major Ben Thompson.

“I think, in general, it’s one of the very small steps we take in order to get to the next level that we want to be at,” Thompson says in regard to his solo in the October concert. “It truly is a never-ending staircase, but the process of being able to work on something with a group of people from start to finish and then expressing it is really nice and allows for improvement on many levels.”

The Thompson Jazz Studies Program at the College of Music focuses on preparing students for professional careers, whether in the greater Denver area or nationally. It’s unique that members of the jazz program get to perform so regularly, between combos, special events like CU Bernstein at 100 and upcoming concerts.

“It’s a very supportive atmosphere for the faculty and students, coming together to develop a language to communicate with people,” says McKee. “That language just happens to be jazz.”

MarieFaith Lane, a current graduate student and Holiday Festival 2021 concertmaster, offers a first-person perspective on the spirit of this weekend’s community event. END_OF_DOCUMENT_TOKEN_TO_BE_REPLACED

Check out this Q&A with Eunjeong (EJ) Lee, including tips for applying to the College of Music, advice for a successful audition and more. END_OF_DOCUMENT_TOKEN_TO_BE_REPLACED
Return to the top of the page