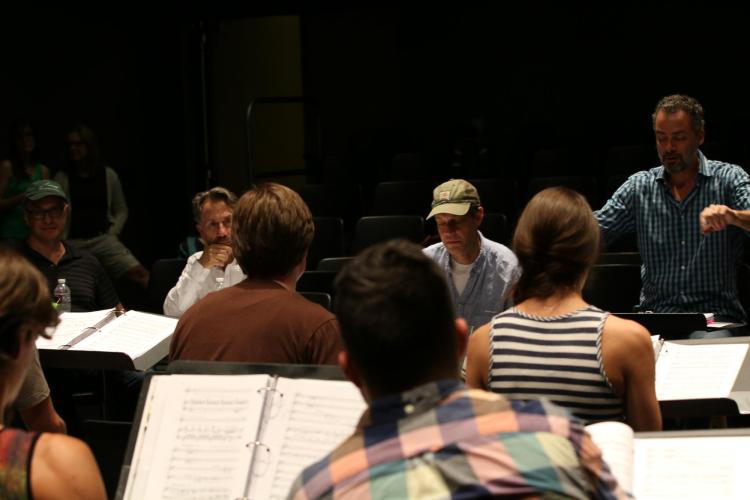 In 2016, Jake Heggie and Gene Scheer workshopped “It’s a Wonderful Life” with CU student singers before its premiere that fall at Houston Grand Opera.

“It’s a good thing we didn’t stop at Rembrandt. We would never have had Picasso.”

So muses Eklund Opera Director Leigh Holman about the importance of nurturing new creative efforts in order to keep the arts alive and thriving. It’s this imperative that underscores the CU New Opera Workshop (CU NOW) as it enters its ninth year.

“It’s just like any art form, whether it be painting, literature or theatre. Opera deserves to have a long-lasting future,” Holman says.

The three-week summer program will again consist of two parts: CU NOW Professional and the Composer Fellows’ Initiative. Both will take brand new works from the stage floor up, giving composers and librettists an extensive and intensive look at their creations that may so far have lived only in their heads.

From there, says CU NOW veteran and legendary composer Jake Heggie, the march toward opening curtain begins. “It’s so rare to get this much time in a workshop setting. We dig into every corner of the piece, hear it performed as many times as we need. It’s invaluable.”

Heggie, the composer behind award-winning operas “Moby Dick” and “Dead Man Walking,” was last in Boulder for CU NOW in 2016, along with librettist Gene Scheer. They were workshopping their rendition of Frank Capra’s holiday-season mainstay “It’s a Wonderful Life” ahead of its premiere at Houston Grand Opera. “Gene and I had the most extraordinary experience in 2016,” says Heggie. “We were writing this new opera very quickly, so to be able to try new things and move things around was almost like getting a preview every single day. And that’s not something you get in opera.”

This year, Heggie and Scheer return with a new piece commissioned by San Francisco Opera’s Merola Opera Program. “If I Were You,” based on the novel by Julien Green, is a contemporary Faustian tale of identity, body swapping, love, death, and deals with the devil.

It’s a challenging story to craft, but Heggie is looking forward to delving into it in the shadow of the Flatirons. “To be able to get away from the studio and the weight that’s associated with that, into a beautiful place with wonderful people, restores you. It’s a great gift to be able to do that.”

Heggie’s involvement with CU NOW doesn’t end with “If I Were You.” For the past several months, he’s been working with the four CU student composers who will premiere their new scenes during the Composer Fellows’ Initiative. CFI Managing Director Daniel Kellogg says the combined mentorship of Heggie and CU Boulder Theatre & Dance alumnus and librettist Mark Campbell make CFI a career-shaping experience.

“Jake is an amazing teacher, and Mark has helped us develop our current structure the past few years. That helps our student composers gain a deeper understanding of the voice and storytelling. It’s the kind of experience that produces versatile chops and confidence.”

Indeed, Eklund Opera Program Assistant and College of Music alumna Christie Conover (MM ‘10)—who participated in the very first CU NOW production in 2010—says the experience was as close to a professional setting as she got during her time as a student. “When you’re thrown into this demanding three weeks, working with actual professionals, you get a real taste of what your career will be like. Looking back, that served me well as I prepared to do new music and workshops with other companies.”

Holman says that’s the ultimate goal of CU NOW. “Most of the students involved tell me that CU NOW was a highlight of their education at CU,” she explains. “When people see that they’ve done CU NOW, they can trust that these singers are intelligent and they know how to learn music quickly.”

She adds, offering anything less as a university opera program would be a grave misstep for Eklund Opera and its counterparts across the country. “I’ve told my colleagues at Opera America that if we don’t teach our students how to be prepared to go out and sing new works, it would be akin to malpractice. This is the golden age of American Opera and our students must be prepared.

“We started CU NOW as something different and new, and now it’s something that is much needed in the marketplace.”

The 2018 CU NOW workshop begins on May 29, with performances June 15 through 17 in the Music Theatre and ATLAS Black Box Theater. All performances are free and open to the public. For more information, visit cupresents.org.

It was a busy fall for the American Music Research Center (AMRC)! One of the... END_OF_DOCUMENT_TOKEN_TO_BE_REPLACED

Friends, My heart is heavy. Associate Professor of Violin Charles (Chas) Wetherbee passed away on... END_OF_DOCUMENT_TOKEN_TO_BE_REPLACED

Longtime Associate Professor of Saxophone Tom Myer retired in May. As the year draws to a close, enjoy his insightful career reflections and advice … and discover what he’s up to now! END_OF_DOCUMENT_TOKEN_TO_BE_REPLACED
Return to the top of the page