Conducting alum spreads a love of music in Chicago 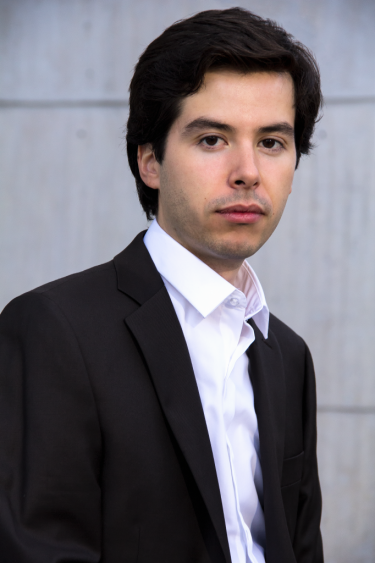 Sometimes, you just don’t know where life is going to take you.

Alejandro Gómez Guillén first came to CU Boulder as a violin master’s student in 2006. This spring—more than 10 years later—he was hooded a doctor of music in orchestral conducting.

“I was greatly inspired by Gary Lewis. When I was getting my master’s in violin, he saw me conducting something for the violin studio and encouraged me to apply for the conducting doctoral program.”

Guillén, who finished up the last months of his doctoral studies from afar, doesn’t see conducting as that much of a departure from his days as a violinist. Instead, he sees this new vocation as an extension of the old.

“I didn’t realize at first that I loved conducting. I guess deep down I wanted to be a conductor, but I didn’t consciously say it or organize my dreams around it. But I see it as another expression of being a musician.”

Guillén grew up in Bogotá, Colombia, the son of two conductor parents and grandson of the founder of the Bogotá Philharmonic Orchestra. He’s been playing violin since he was 5 years old, and considers music to be a vital part of his upbringing.

“I could sing before I could talk,” Guillén says. “My parents say that they took me to symphony concerts as a child and I would point to the violin section and tell them that I wanted to do that.”

Having always known the importance of music, Guillén has spent the last year working with Project Inclusion with the Chicago Sinfonietta. The program promotes diversity among musicians, conductors and administrators through professional development. Guillén splits his time as a professional conductor between Chicago and Bloomington, Indiana, where he is artistic director of the Bloomington Symphony.

“Project Inclusion is all under the umbrella of diversity and inclusion,” he explains. “How do we give more people access to music, how is classical music a tool for change in the community? I’m passionate about building community in my own work so it’s been a perfect fit.”

In addition to the service Project Inclusion offers to underserved communities, Guillén says it has provided him with invaluable experience as a conductor.

“The program truly deals with all aspects that a conductor needs to know in order to be successful. Not just musical experience, but professional experiences. We meet to discuss marketing, fundraising and relationship development, and then we are put in real-world situations with the Sinfonietta.

“It also led to my appointment as associate conductor for the Fort Worth Symphony, a position I will begin in the fall,” he adds. “Helping the fellows secure a professional appointment like this is one of the main goals of the program, and I plan to remain involved with the Sinfonietta as a mentor for the next year.”

Guillén says his time in the Chicago community parallels one of his most formative projects during his time at the College of Music, when he and fellow doctoral students Joshua Horsch and Joel Schut helped grow the campus orchestra.

“That was one of my most treasured memories. Gary brought the campus orchestra back, along with [graduate students] Michael Boone and Chris Walls before us, but he really let the graduate students take it on. It was kind of our baby. It was a great thing to be able to help build that.”

Though he’s a full-time conductor with a full plate of outreach activities and performances, Guillén says he still finds time to practice his violin—because of something he learned in Boulder.

“I can’t emphasize enough how important it is to be your best as an instrumentalist when you’re a conductor. You also have to learn as much as you can about the history and context of the music you’re conducting. We’re always so eager to wield the baton, but you have to get the big picture and focus on the music first.

"Only then will you be able to impart anything through your actions.”

Dean Robert Shay explains what the move to a temporary remote operating status from Sept. 23 through at least Oct. 7 means for the College of Music. END_OF_DOCUMENT_TOKEN_TO_BE_REPLACED

The Office of the Provost today announced four finalists in the search for the next dean of the College of Music. END_OF_DOCUMENT_TOKEN_TO_BE_REPLACED

The Entrepreneurship Center for Music is stepping up its work to promote student projects and businesses during the COVID-19 pandemic. END_OF_DOCUMENT_TOKEN_TO_BE_REPLACED
Return to the top of the page