It takes a team to make music 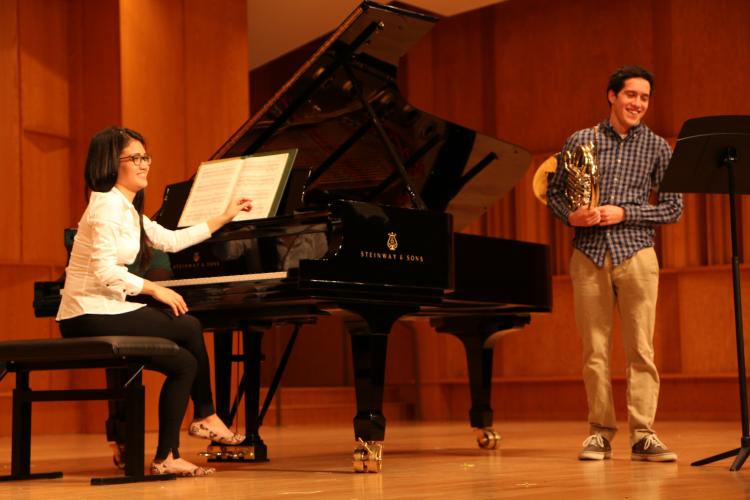 If there’s one distinction that every student, faculty member and administrator at the College of Music can be proud of, it’s that the spirit of cooperation is alive and well at the college. The sense of camaraderie—of many different groups working together toward a shared goal—is one that permeates every aspect of musical study at CU Boulder.

Perhaps one of the chief reasons for that is the college’s prospering collaborative piano program.

“And the faculty have always been very open to collaboration from the start,” says McDonald. “That helps make our program stronger as well.”

Although partnership doesn’t begin and end with the collaborative piano program, Nguyen, McDonald and their colleagues take their responsibility to heart each time they begin the music-making process, following in the footsteps of higher education pioneers from the not-too-distant past.

Nguyen says that, despite the program’s success in Boulder and other schools around the country, the phrase “collaborative piano” still raises eyebrows because it’s still relatively new to the music world.

“It had been called accompaniment for centuries. But the way these pieces are performed seems to have changed the perception of the role of the pianist,” Nguyen explains. “The earliest sonatas for violin and fortepiano were even written for the violin to accompany the piano.”

Composers like Mozart and Beethoven would premiere their own sonatas as the pianist. There was no such thing as an “accompanist” in the 18th and 19th centuries. Then came the advent of the piano virtuoso.

“Until then, all pianists collaborated.”

Nguyen says with the help of British pianist Gerald Moore, who famously told people he’d rather play with others than by himself, pianists more interested in collaborating began to have a path. In 1947, the University of Southern California founded the first master’s program in accompanying; a doctorate program followed in the 1970s.

“Then New York pianist Samuel Sanders in the ‘80s coined the term ‘collaborative piano.’ The word ‘accompanist’ can make us sound subservient. But I don’t play an ‘accompano,’ I play a piano,” Nguyen asserts. “I just love to play with other people when I do.”

The term stuck, and since then, pianists like Jean Barr, Martin Katz and Margo Garrett followed Sanders’ lead. One of the discipline’s trailblazers, Anne Epperson, even helped start CU’s program.

McDonald has been playing music since she was a child. She says she was always shy growing up, but getting up on stage gave her a voice and helped her open up to people.

“I’ve always loved to perform, but when there is even one more person on stage with you, you have their energy as well. I become a different person when I’m up there performing.”

McDonald first met Epperson as a performer in the Fischoff Competition. She then studied with her at the Music Academy of the West and then the University of California, Santa Barbara. When Epperson left California for Boulder, McDonald came with her.

“We both fell in love with this community. It just seemed like the right place to have a program like this, one that’s integrated with all the studios.”

Epperson and McDonald built the studio for several years until Epperson left to lay the foundation for another collaborative piano program at the University of Texas at Austin. That’s when Nguyen found herself in the foothills, after a winding road.

“I was actually going to be a medical doctor,” she says. “But after about a year, I realized physiology was not for me.”

After a stretch of odd jobs—retail, clerical work—Nguyen began accompanying friends on piano. One thing led to another, and eventually she made what ended up being a pivotal decision and attended the Music Academy of the West.

Nguyen, too, worked with Epperson at the festival and school. “I credit her for saving my career. I loved it—I loved working with other people. I went back to school and I decided I wanted to teach.”

A goal for the future

Today, Nguyen and McDonald pride themselves in their unique approach to training the collaborative pianists of tomorrow.

“Margaret and I both work with all of our students,” Nguyen explains. “That brings a balance to our students’ lessons. It’s challenging, but we make our different approaches work because we’re both listening for the same things.”

McDonald adds, “Our students also get feedback from the other faculty, and we provide feedback for instrumentalists and vocalists. It’s great for them to have those different perspectives.

“In addition to that, we have such a great team that works with our students: Suyeon Kim and Hsiao-Ling Lin, and Mutsumi Moteki, Nick Carthy and Jeremy Reger are all actively working with our students. They’re a crucial part of what we do.”

That’s what drew master’s student Mac Merchant to the program.

“The idea of having two lessons a week—and getting to play with every different kind of instrumentalist and ensemble—was appealing, along with the idea of working with acclaimed guest teachers and clinicians,” he says.

“One of my best experiences here was working with [guest artist] Martin Katz, one of the most celebrated vocal coaches in the country.”

In her mind, Nguyen sees collaborative piano at the doorstep of change.

“There are currently a handful of amazing pedagogues who built these programs, but they’re all going to retire in the next decade. Margaret and I have been talking about how we’re going to bring up the next generation of pedagogues—students who are interested in teaching, not just playing.”

Alumna Christina Lalog Seal took those lessons with her as a faculty member at Northern Kentucky University, where she teaches aural skills and piano.

“I am grateful for a depth of experiences at CU,” Seal says. “Rehearsing operas with Maestro Carthy at the podium and team-teaching Intro to Accompanying with Dr. Nguyen were some of my best memories.”

Regardless of what the future holds, one principle will always guide the teaching in the department.

“Collaborative piano is stimulating because it’s different every time. You can play the same piece with various partners and have completely distinct interpretations,” Nguyen says. “And you never know what opportunities will come from a collaboration or what new experiences your next concert might lead to.”

Doctoral student Cecilia Lo-Chien Kao, who has also studied with Anne Epperson, knows that firsthand. She performed in November at the Carnegie Hall showcase concert.

“That was the best experience I’ve had here,” she says. “As a collaborative pianist, it is an essential skill to be able to cope with different stage pressures and a variety of repertoire. In other words, you need to love performing! Having the opportunity to perform in such a venue was a great experience for me.”

McDonald says in addition to those high-profile performances, she’s pleased to be able to play with the best in the world right here in Boulder.

“There’s a sense that if you’ve played Carnegie Hall, you’ve made it. Which is true, but I’ve also performed with Paula Robison, Ian Bousfield and many others here. I’ve forged a connection with them: When you play together on the stage, it connects you a way that nothing else can.”

As we celebrate National Hispanic Heritage Month, we're inspired by the resilience and determination of DMA student Pablo Beltran. END_OF_DOCUMENT_TOKEN_TO_BE_REPLACED

We’re thrilled to introduce Raven Dow-Hygelund and Anna Kallinikos as the most recent recipients of the College of Music’s Sher Distinguished Musician Scholarship. END_OF_DOCUMENT_TOKEN_TO_BE_REPLACED
Return to the top of the page