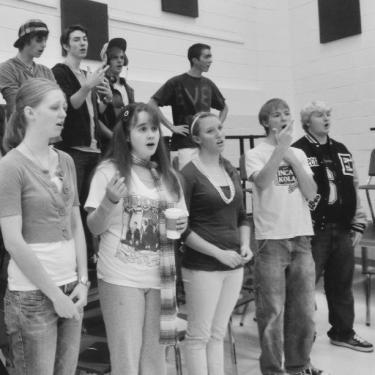 Caroline Vickstrom can point to the exact moment when she knew she wanted to be a choir teacher.

“It was after one of my conducting finals,” she remembers. “I walked out of class and I remember saying out loud, ‘How convenient. I love the thing I’m majoring in!’”

Vickstrom is finishing up a double degree in voice and choral music education this year. As she gets ready for student teaching in the fall, she’s been doing what many students do as they near the end of their time in college: She’s looking back on the road that led her here.

“My hint that I could do this as a career was actually when I took AP Music Theory in high school and really loved it. I was fascinated by chord structure, like math or science for music.”

Amid preparing for her seventh and eighth Eklund Opera productions, this spring’s “The Magic Flute,”  and “Red Hot and Cole,” Vickstrom and her peers are taking the budding vocal jazz program at the college to a new level for a March 5 concert in Grusin Music Hall.

Led by graduate student Brian Stone, three small ensembles of CU students will perform alongside Fairview High School’s jazz groups. On the program are classics like “Georgia on My Mind” and more contemporary hits like “True Colors”—harkening to the a cappella heyday of TV’s “Glee.”

This isn’t the first time CU’s vocal jazz ensembles have performed with area high school students. Vickstrom, who has been with the program since its inception at the hands of alumnus Paul Thompson, was there last year when the student group Table of Five collaborated with Mead High School in Longmont.

“It’ll be cool to revisit that, but with a new group, a new director and a different high school. I think we’re going to be able to learn from them. Fairview’s jazz groups are solid!”

Preparing for the concert has been a different kind of learning experience for the aspiring music educator. In addition to working with guest clinician Stephen Futrell in the days leading up to the concert, both the CU groups and the Fairview groups will rehearse together.

“I’m getting close to student teaching, so I’m kind of on the border of these two roles of student and teacher,” Vickstrom says. “It’ll be great to have the experience of singing in an ensemble of younger students, as opposed to being in front of them conducting.

“Half my brain will be paying attention to what the Fairview teacher is doing, and the other half will be listening to the people around me. I think I’ll learn a lot from that both as a singer and a teacher.”

For Vickstrom, who has been singing in choirs since elementary school in Evergreen, the chance to forge a connection with a new group of people is what makes teaching music so rewarding.

“We’re all so close in age, so it’ll be a very collaborative experience. In our education classes, we talk a lot about our central philosophy and how it governs how we teach. I realized that my teaching is guided by this sense of belonging and community. That’s why I love teaching, and music enhances that.”

As she recalls what she learned in that conducting class—the one that she says solidified her career path—Vickstrom says it’s more than just the adrenaline high of standing in front of a great choir that makes her excited for the future.

“Intellectually, you’re never stuck. Music offers a little bit of everything. There’s the team-building aspect and supporting everyone else in a group. There’s also the math and breaking up a measure. And of course, the role history plays in a composition. You can dive into every subject through the lens of music. It’s a door to other things.”

The combined concert with the CU Boulder and Fairview High School vocal jazz ensembles is Sunday, March 5 at 2 p.m. in Grusin Music Hall. Find more details on the Events page.

Curiosity drives Lydia Wagenknecht, a PhD candidate in ethnomusicology and recent recipient of a Fulbright Research Award. “I care that my research will help us understand something in a more broad-based way that we didn’t understand before,” she says. END_OF_DOCUMENT_TOKEN_TO_BE_REPLACED

We’re so excited to welcome alumnus Damani Phillips back to campus this week and to present him the College of Music’s 2022 Distinguished Alumnus Award at our commencement ceremony on May 5! “The versatile training provided by CU has been the cornerstone of my success to date, and has enabled me to do and be many things well beyond typical expectations,” he says. Meet Phillips and discover his powerful advice to graduating Music Buffs. END_OF_DOCUMENT_TOKEN_TO_BE_REPLACED

On May 5, we look forward to welcoming back Judith Glyde, formerly professor of cello and chamber music at the College of Music and chair of our string faculty. Since retiring in 2014 to live in New York City, the professor emerita she has been active with the college’s alumni community there, offering tremendous support to Forever Buffs who are now living and working in the city. END_OF_DOCUMENT_TOKEN_TO_BE_REPLACED
Return to the top of the page