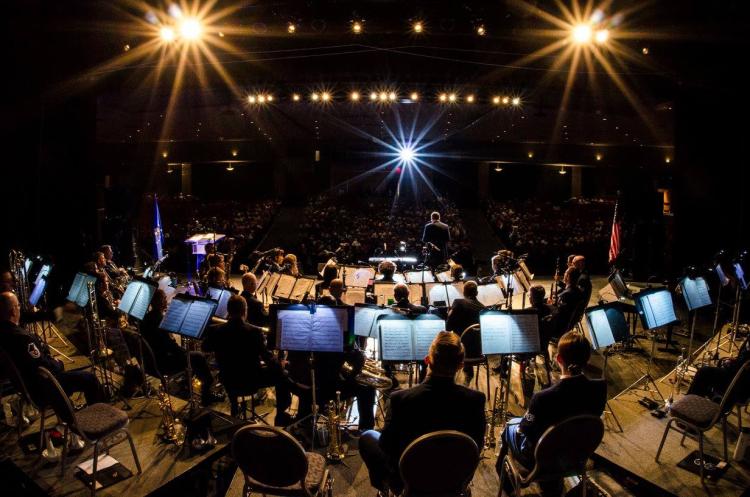 Musical excellence, intrastate collaboration and the 70th birthday of the U.S. Air Force will all be on display at the College of Music this February.

On Feb. 9 and 10, the College of Music’s band department hosts the U.S. Air Force Academy Band for a series of master classes and a joint concert in Macky Auditorium. Donald McKinney, director of bands at CU Boulder, says the two groups had been eyeing a collaboration for some time.

“It’s a unique event—something we’ve never done before,” McKinney says. “They were looking for a chance to collaborate with the university, and Macky Auditorium was a big draw, too.”

“We strive to be on the cutting edge of our field and collaborations with great musicians are a big part of that,” says Captain Shanti Simon. Simon is Flight Commander of the USAFA Concert Band, the largest of nine ensembles of professional musicians at the academy.

“Additionally, we cherish the opportunity to spend time in the Boulder community and share the stories of the great things our Air Force is doing around the world,” Simon adds.

The February visit will consist of master classes with the graduate brass and woodwind quintets and will culminate in two concerts: one with the CU Symphonic and Concert bands on Feb. 9 and a joint concert with the USAFA Band and the CU Wind Symphony on Feb. 10.

Says McKinney, “It’s exciting that all of our students, even the Concert Band, will be involved. Some of them might end up playing in military bands someday, so being able to see up close what their daily routine is like will be a great learning aspect of the collaboration.”

Senior Airman Adrian Holton, a trumpet player in the band, says part of the goal for the USAFA band is to provide students with a window into the professional music world. “We were all there once. There were certainly questions I wish I could have had answered about the life of a military musician, and it’s great when we can give back and share knowledge of our successes and our failures.”

Additionally, each of the groups will perform a piece written by American composer David Maslanka. Maslanka will be in residence at the college during the collaboration.

“Any time we can expose our students to a living composer is really valuable for them,” McKinney says.

The Air Force Academy Band will premiere a piece Maslanka wrote for the armed services branch’s 70th birthday. “First Light” is a work in two distinct movements: one dark and one light.

“In meeting with Maslanka, we didn’t see the need to limit him on ideas or messaging, but now that the piece is written we can certainly hear the Air Force story in the music,” Holton explains. “The idea of darkness moving toward light—of real change coming from a place of struggle—is relevant to all aspects of life, but certainly to the Air Force, where we’ve gone from propeller blades to jet planes to guided missiles throughout our history.”

McKinney, who will lead the Wind Symphony in a performance of Maslanka’s “Traveler,” sees a future for more collaborations like this one.

“We have a fantastic composition program, which means collaboration between our bands and that department, but every couple of years at least we also bring in a guest composer to work with our bands. And now that the Air Force has seen our willingness to work with them, it opens the door to more collaboration with military bands.

The CU Concert Band and Symphonic Band concert is Thursday, Feb. 9 at 7:30 p.m. in Macky Auditorium; the joint concert with the U.S. Air Force Academy Band and the CU Wind Symphony is Friday, Feb. 10 at 7:30 p.m. in Macky Auditorium. Like all College of Music events, both are free and open to the public. For more information, visit the College of Music events calendar.

It was a busy fall for the American Music Research Center (AMRC)! One of the... END_OF_DOCUMENT_TOKEN_TO_BE_REPLACED

Friends, My heart is heavy. Associate Professor of Violin Charles (Chas) Wetherbee passed away on... END_OF_DOCUMENT_TOKEN_TO_BE_REPLACED

Longtime Associate Professor of Saxophone Tom Myer retired in May. As the year draws to a close, enjoy his insightful career reflections and advice … and discover what he’s up to now! END_OF_DOCUMENT_TOKEN_TO_BE_REPLACED
Return to the top of the page