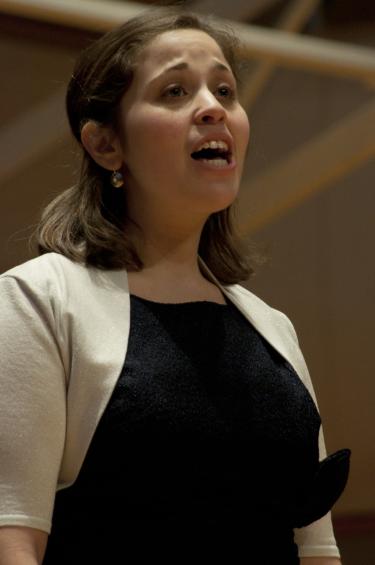 When Lia Bendix graduates on Dec. 15 with a Bachelor of Music Education degree, it won’t be her first diploma.

Bendix, originally from Cleveland Heights, Ohio, earned a degree in French and francophone studies from Carleton College in Minnesota before transferring to the University of Colorado Boulder to pursue music education.

“In my experience, music classes are amazing places to build community within a school, often with people that you would never encounter during the rest of the day, and to build non-cognitive skills such as perseverance, teamwork and leadership,” she says.

On top of the double degree, Bendix will be able to add another accolade: Outstanding Graduating Student for the College of Music.

“I am honored! When I heard about the honor, I was very flattered that my work and effort had been acknowledged in such an official way,” Bendix says.

A longtime member of the college’s top choral ensemble, the University Singers, Bendix has focused her studies on choral music education—an area about which she’s deeply passionate.

“Music is often a respite for students,” Bendix explains. “Children who maybe don't feel like they have a place in the rest of the school can feel like they belong in a music class where they can express themselves and connect emotionally to a piece of music.”

“Lia distinguished herself immediately upon entering our program through her commitment to teaching, her dedication to learning and her openness to new ideas,” says Assistant Professor of Music Education Leila Heil, who worked with Bendix in several music education courses and served as her academic advisor.

“She demonstrated a high degree of leadership and initiative, both at CU and in the community.”

After graduation, Bendix plans to substitute teach in the area before looking for choral or general music teaching positions in the Denver, Milwaukee and Cleveland areas.

Curiosity drives Lydia Wagenknecht, a PhD candidate in ethnomusicology and recent recipient of a Fulbright Research Award. “I care that my research will help us understand something in a more broad-based way that we didn’t understand before,” she says. END_OF_DOCUMENT_TOKEN_TO_BE_REPLACED

We’re so excited to welcome alumnus Damani Phillips back to campus this week and to present him the College of Music’s 2022 Distinguished Alumnus Award at our commencement ceremony on May 5! “The versatile training provided by CU has been the cornerstone of my success to date, and has enabled me to do and be many things well beyond typical expectations,” he says. Meet Phillips and discover his powerful advice to graduating Music Buffs. END_OF_DOCUMENT_TOKEN_TO_BE_REPLACED

On May 5, we look forward to welcoming back Judith Glyde, formerly professor of cello and chamber music at the College of Music and chair of our string faculty. Since retiring in 2014 to live in New York City, the professor emerita she has been active with the college’s alumni community there, offering tremendous support to Forever Buffs who are now living and working in the city. END_OF_DOCUMENT_TOKEN_TO_BE_REPLACED
Return to the top of the page